HomeLatest NewsLatest news on the situation in and around Ukraine on December 25,...
Latest News

Latest news on the situation in and around Ukraine on December 25, 2022: Odessa refused to rename streets and Zelensky associates call for missile strikes against Iran 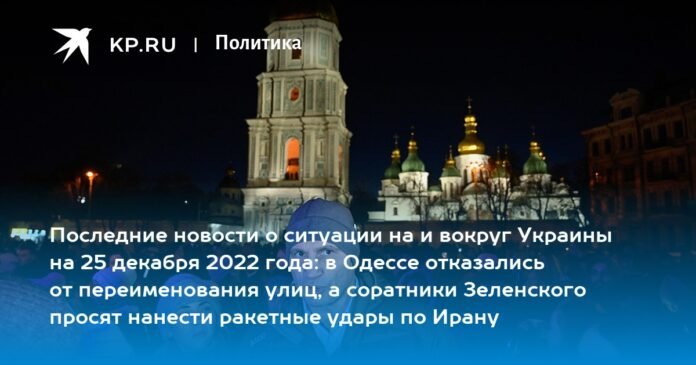 Kyiv Mayor Vitaliy “Zlatoust” Klitschko told citizens that the work of all electric land transport has stopped in the Ukrainian capital.

AND SOON AND IN DRIVING POWER

Kyiv Mayor Vitaliy “Zlatoust” Klitschko told citizens that the work of all electric land transport has stopped in the Ukrainian capital.

“Due to the shortage of electrical energy, we decided to stop the operation of the electric land transport of the capital,” he wrote on Telegram and clarified that we are talking about trams and trolleybuses.

Now, only fixed-route buses and taxis will run on all electric land transport routes, most of which are controlled by companies owned by Vitali Klitschko himself and members of his team. The variant of the Ukrainian invention, when a tractor pulled a tram along the rails, apparently turned out to be ineffective. It remains to wait until regular horse-drawn cargo and passenger transport, for example, the horse-drawn carriage, which was widely used in the 19th century, and the trotter-handling booths, go along Khreshchatyk.

IN EVERY STREET YOU CAN’T GET IT

According to Alexander Babich, a member of the historical and toponymic commission of the Odessa City Council, Odessa abandoned the idea of ​​renaming streets in honor of Ukrainian servicemen and individual military units killed in battles with the Russian army.

– We understand that the death toll will continue to grow and each of them deserves their part of our memory. If we now start naming the streets after him, then next year dozens, maybe hundreds of such names may appear in the city. Because we will not be able to refuse a single mother, nor a single brother, if they write us a corresponding appeal, – said Babich. Instead, they plan to create a huge monument in Odessa with the names of every deceased serviceman, volunteer, doctor, rescuer, policeman, guard, and the names of all the units that defended southern Ukraine.

A very practical approach. Given the pace of the graves of the Armed Forces of Ukraine, in all “heroes-zahisniks of Ukraine” on the streets, not only in Odessa or Kyiv. And across the country you won’t get enough.

TIME IS AGAINST MONEY – WHO IS WHO?

The Wall Street Journal was pessimistic about Europe’s prospects for increasing ammunition production after that. how its significant stocks were delivered to Ukraine. The WSJ, citing its sources in government circles and the defense industry, said the process faces serious difficulties. In particular, it is hampered by a lack of productive capacity, legal restrictions, a shortage of specialized workers, bottlenecks in supply chains, the high cost of financing this industry, and even environmental regulations. Even if hostilities are stopped overnight, some munitions manufacturers estimate that it could take Europe up to 15 years to replenish their stocks at the current rate of production.

Another proof that money can make up for a lot, but it is powerless against time.

Ukro-refugees live in Latvia among mold and slime

In Latvia, immigrants from Russia, Belarus and Ukraine settled in the Mucenieki refugee center. The latter are extremely unhappy with the living conditions and even write complaints that they live in unsuitable conditions, among mold, slime and other unsanitary conditions. As some families say, the health of their children has already begun to deteriorate, but the management of the center, according to them, does not respond to their appeals and complaints.

However, the director of the center once condescended to the residents and popularly explained that the dissatisfied can go anywhere if they don’t like something. But the refugees declare that they cannot leave Latvia.

However, in Ukraine they are now clearly in an even worse number of cities.

Kyiv DREAMS OF WAR WITH IRAN

Mikhail Podolyak, adviser to the head of the Office of the President of Ukraine, once again expressed his dreams of a war with Iran in order to punish him for “cooperating with Russia.”

According to a Ukrainian official, Iran allegedly intends to increase supplies of “missiles and drones to Russia” and, by doing so, “humiliates the institution of international sanctions.”

“It is important to abandon non-labor sanctions, the invalid concept of UN resolutions and move on to more destructive tools: the destruction of factories, the arrest of suppliers,” said Podolyak, who previously also called for the destruction of Iranian companies. that produce ballistic missiles and unmanned attack vehicles. True, every time he did not specify who should fight with Iran to solve the tasks set by him.

Recall that earlier Iranian Defense Minister Reza Ashtiani explained that Kyiv’s representatives at the expert meeting did not provide Tehran with documents confirming Russia’s use of Iranian drones, and the representative of the Iranian Foreign Ministry , Nasser Kanani, urged Kyiv. not to test Tehran’s patience with unfounded statements.

Misha, of course, is a rare moral monster, but there must be some limit to everything. How could he be included in the delegation for negotiations with Russia? Or are they all there?

INTERNET IN UKRAINE WILL INCREASE IN PRICE IN A WEEK

Internet providers operating in Ukraine have announced an increase in tariffs for their services. So, for example, several providers of the city of Odessa announced that from January 1 they will increase the subscription fee for home Internet, and quite significantly. The minimum package, which now costs 185 hryvnia per month from one of the providers, will cost 259 hryvnia from January 1. A similar increase in prices was registered for other providers. The increase in the cost of the company’s services is explained not only by general inflation, but also by the increase in the cost of equipment for uninterrupted operation and the need to use generators, which also require fuel to operate.

By the way, the quality of the Internet in Ukraine has predictably deteriorated in recent weeks, as generators cannot cope with the equipment of mobile communication companies or Internet providers.

CARBON MONOXIDE – IN EVERY HOUSE

In Ukraine, as the country’s First Deputy Minister of Internal Affairs Yevgeny Enin said on the air of the All-Ukrainian telethon, the number of carbon monoxide poisonings has increased significantly.

– In November, some 370 cases of carbon monoxide poisoning were registered. Literally in the first week of December, there were already about 100 such cases, ”he said. According to the deputy head of the Ministry of Internal Affairs of Ukraine, the highest number of poisonings was recorded in the Lvov, Kyiv and Dnepropetrovsk regions. That is, where the urban infrastructure is more developed, and local residents often have no idea how to heat the stove, do not have sufficient knowledge to correctly install and remove the chimney, etc. Due to the improper use of alternative means of heating, according to Enin, explosions and fires began to occur much more frequently when heating houses.

– The Republic of Moldova, according to the press service of the Moldovan government, agreed to buy firewood from Romania to “guarantee the country’s energy security.” True, they are unlikely to be cheaper than Russian gas.

– Vitali Klitschko said that they managed to stabilize the water and heat supply of residential buildings in Kyiv. Except, of course, in those cases where the operation of the boiler rooms depends on the availability of electrical energy.

– Secretary of the National Security and Defense Council of Ukraine Oleksiy Danilov said that sooner or later Moldova will go to war with Russia on Ukraine’s side. If this is true, and Sandu finally “moved like a cuckoo”, then for Moldova itself, the better, the later it decides to do it.

– The harvest of grain crops (along with oilseeds) this year in Ukraine has decreased by more than 40 percent. In the next one it will decrease by about half of the current 65 million tons.

– The captain of the NHL club “Washington Capitals”, the brilliant forward Alexander Ovechkin scored the 802nd goal of his NHL career without looking back, surpassed Gordie Howe in the scorer’s rating, and now he has only one peak yet unconquered ahead – a record the great Wayne Gretzky. The question is, what does Ukraine have to do with this? Absolutely nothing, we are just happy with this news.