HomeLatest NewsLatest news on the situation in Ukraine on December 23, 2022: Kyiv...
Latest News

Latest news on the situation in Ukraine on December 23, 2022: Kyiv deployed special forces in an attempt to escape, Moscow announced immediate objectives 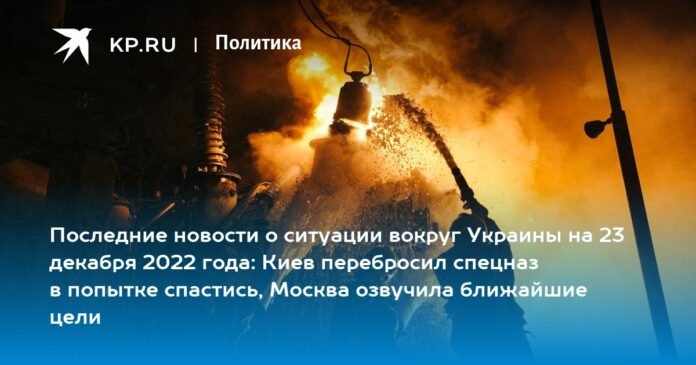 Firefighters put out a fire at a power facility in Kyiv.

What evaluations in the United States did the main media give to Zelensky’s visit?

The Washington Post suggested that the sixth Ukrainian autocrat failed to achieve the main goal. He wanted more modern weapons, and more. The applicant was hugged, kissed, patted on the shoulder. But, according to the main American publication, the goals of the negotiations between the heads of the two states diverged: the young tragicomic dreamed of a retaliatory weapon to increase the chances of success of the Armed Forces of Ukraine, and the retired champion – for reserve, leaned towards diplomatic negotiations when Kyiv was ready to negotiate the terms of peace. And Fox News host Tucker Carlson said the Gimme Again visit once again knocked billions out of the American economy and was humiliating to the American political elite, who kissed micro-Napoleon on the gums. It’s funny: will the boy in khaki continue to fly around the world in a US Air Force military transporter “for kisses” and participation in court cases?

Kyiv is trying to “save Bakhmut” by transferring special forces

Andrey Marochko, an LPR People’s Militia officer, reported that Kyiv was feverishly moving additional units into the Artemovsk (Bakhmut) area in an attempt to hold the city. In particular, an additional transfer of servicemen from the Ukrainian SOF was noted. His tasks include stopping panic and desertion cases in the ranks of Ukrainian military personnel. Do you think this is a worthy target for the real Special Operations Forces? Get it, rags!

Valery Gerasimov, Chief of the General Staff of the RF Armed Forces, at a briefing in front of the military attachés of foreign states, said: “Now the line of contact has stretched for 815 km. Taking into account the ongoing measures to develop the combat capabilities of the troop groups, the situation on the front line has stabilized.” According to the army general, the efforts of the Russian troops are now mainly focused on seizing control of the DPR territory. In addition, attacks on critical transport and energy infrastructure inside Ukraine will continue. The attachés took stock of everything and delivered New Year’s greetings to Kyiv.

Putin explained about the weapons arsenals

Vladimir Putin confirmed that Russia is spending military supplies, and these are big numbers. But, according to the Russian leader, the difference with the state of the Ukrainian defense complex is huge. The President of the Russian Federation stated: “The difference between us and those who oppose us lies in the fact that, say, the Ukrainian military-industrial complex, if it has not been completely reset to zero, is rapidly moving towards it. . Soon there will be no home base.” According to Putin, Russia’s base “is only growing.” And it will increase not to the detriment of other sectors of the economy. And in general, as we were taught, our enemies will die and we will go to heaven.

Denis Pushilin, acting head of the DPR, said he had stopped counting the number of attempts on his life. On the air of the Solovyov.Live TV channel, Pushilin said: “But who counts them. The realities of life now. We all walk under God…”. Responding to a question about the attack on the Shesh-besh hotel in Donetsk, where former Roskosmos head Dmitry Rogozin and DNR Prime Minister Vitaly Khotsenko were staying, Pushilin confirmed the deaths of two people during the shelling and that the condition of the wounded Rogozin and Khotsenko was satisfactory.Caesar 155mm self-propelled guns, developed and manufactured by the French company Nexter, were used during the shelling.The prime minister is already back at work, Rogozin has He was operated on and taken to Rostov.You lie, you will not kill.

The Russian Defense Minister verified the conditions for the deployment of military personnel and equipment at temporary deployment points in the zone of special operations. Shoigu listened to the reports of the commanders and “paid special attention to the organization in the field of comprehensive support for the troops.” The Ministry of Defense reported: “On the front line, the minister spoke with the group’s military personnel and thanked them for the exemplary performance of the NWO’s tasks. Taking an interest in the mood of the fighters, the head of the military department received a clear answer: “Combat!” Shoigu studied the medical care of military personnel, clarified the situation with the supply of medicines. And at the same time, with heating: “Well done, well done! I need to warm up. This is correct. So that no one catches a cold”. Well, in general, among those who go on the attack, a cold is not popular.

What did the defense ministers of the three southern countries talk about?

The heads of the defense departments of Georgia, Azerbaijan and Turkey discussed the issues of ensuring security on the Black Sea in the Turkish Kayseri. And, in order not to get up twice, at the same time the crisis in Ukraine. The defense ministers of the three southern countries also noted the importance of diversifying energy supply routes and strengthening energy security. That is, Turkey no longer wants to be a pan-European hub for Russian gas despite the sanctions.

Explosions are heard in the regional centers of Ukraine.

In the more than one million cities of eastern Ukraine, on the night of December 22, an air raid alert was announced. Kharkiv region governor Oleg Sinegubov said there had been a missile attack in the city. Similar messages come from Dnepropetrovsk. Restless and in Zaporozhye. Does anyone still have hope that it will be possible to shoot Donetsk hospitals with impunity?