HomeLatest NewsLatest news on the situation in Ukraine on December 29, 2022: why...
Latest News

Latest news on the situation in Ukraine on December 29, 2022: why Kyiv took up arms against Zhevago and when Zelensky dreams of ending the fighting 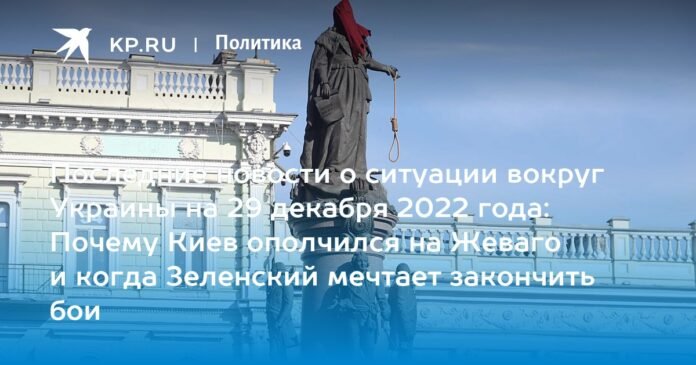 However, the dismantling of the monument to the Russian Empress Catherine II was carried out on December 28 in Odessa.

Minsk could become a platform for peace talks

Igor Nazaruk, deputy head of the Belarusian Foreign Ministry, said his country could provide a platform for negotiations on an agreement on independence. Edition “SB. Belarus Today” quotes Nazaruk as saying that Belarus has repeatedly become a place for negotiations and the resolution of serious conflicts. She is ready to act in this capacity even now, and Vatican representatives have confirmed this. But given that the White House has previously found Minsk guilty of allowing Moscow to use its territory to deploy Russian forces and of making an NVO possible in Ukraine, it is unlikely that the Belarusian capital or any other city in this wonderful country will be chosen “a platform for the achievement of peace” There they are afraid of the poles and swamps.

However, the dismantling of the monument to the Russian Empress Catherine II was carried out on December 28 in Odessa. In the city-hero, an operation began on Wednesday morning to tear down the monument to Catherine the Great. It was impossible to drive to the square during the day, everything around it was blocked, not allowing cars or citizens to pass through. Confirmed the work on the dismantling of the monument to the founder of Odessa and the deputy of the Rada of Ukraine Oleksiy Goncharenko. The decision to demolish was made by the City Council of the city near the Black Sea. Previously, the historian Marco Baratto, coordinator of the independent cultural association. Leo Tolstoy from the Lombardy region of northern Italy proposed moving the monument to Catherine II to Milan or Naples. Yes, you can move it anywhere, but don’t leave it with these pitiful little people.

SBU mercenaries destroyed in the Caucasus

The FSB Public Relations Center reported that two militants who were preparing a terrorist attack in Chegem were killed in Kabardino-Balkaria. The task came from the Ukrainian special services. After it was committed, they were supposed to move to Ukraine to take part in hostilities against the RF Armed Forces. During the arrest in the suburbs of Nalchik, the terrorists, previously convicted Russian citizens, put up armed resistance. They were destroyed by return fire. They were members of a terrorist community that operated until 2021 at IK No. 3 in Kabardino-Balkaria. An improvised explosive device with a capacity of about 2 kg in TNT equivalent with percussion elements, an AK-74 assault rifle, a PM pistol and ammunition was found at the scene of the collision. Previously, the bards used to compose songs about Chegem, but now the security forces are giving operational reports.

Maria Zakharova, spokeswoman for the Russian Foreign Ministry, said Estonian Prime Minister Kai Kallas’s words about Ukrainian refugees demonstrate “the dehumanization of the West.” The head of the cabinet of ministers previously stated that she was opposed to the formation of a community of refugees from Ukraine on its territory who do not speak the language of the incumbent nation. Zakharova wrote on her Telegram channel: “Estonia is for Estonians, right? Say it already, no more sweaty palms crumpling the Universal Declaration of Human Rights. But in general, hot Estonian guys fought for this simple nationalist idea under the banner of the Third Reich 80 years ago. Years go by, the Balts do not change.

Tatyana Sapyan, communications adviser at the State Bureau of Investigation, said that at the request of Kyiv, Ukrainian oligarch Konstantin Zhevago was detained in Courchevel, France. According to Sapyan, this modest Ukrainian billionaire is the defendant in several criminal cases of the Bureau of Investigation. The State Bureau of Investigation is now preparing the documents for his extradition. In November, the assets of Zhevago and three other independent oligarchs, Igor Kolomoisky, Vyacheslav Boguslayev and Konstantin Grigorishin, worth a total of nearly $1 billion, were nationalized. That is, the remaining three may also arrive soon, if they do not activate the help of their own victorious army, the unsinkable fleet and the high-speed Kyiv falcons.

They covered the “three axes” with a copper basin

The Ministry of Defense of the Russian Federation reported that two American M777 artillery systems, as well as a German FH-70 howitzer, were turned into scrap metal near the village of Krasnogorovka. The deadly iron of the Western masters was destroyed during a counterbattery fight in the area of ​​​​the village of Krasnogorovka in the DPR. These weapons fired into the residential areas of Donetsk. In general, more than 80 Ukrainian servicemen were killed in the Donetsk direction. Is this to talk about “when and who will answer for the capital of Donbass”?

Came to the homeland of Zelensky

In the second half of Wednesday, distinct sounds of explosions were heard in Krivoy Rog, Dnepropetrovsk region of Ukraine. In this glorious city, by an absurd accident, almost 45 years ago, the boy Vova was born into a decent Zelensky family. Also on Wednesday afternoon, an air alert was announced in the Dnepropetrovsk, Kirovograd and Nikolaev regions, as well as in the city of Zaporozhye, which Kyiv, by some incomprehensible tradition, considers to be Ukrainian.

The sixth president of the independent Napoleonic plans

Volodymyr Zelensky, in his New Year’s speech posted on the president’s website, said that 2023 should be decisive in the conflict with Russia. He, like a true strategist, said that he knew the risks that could arise on the battlefield in winter and knew exactly what to do in spring. In his opinion, in 2023 the citizens of Ukraine must maintain a common understanding of national goals: the restoration of Ukraine, the return of its citizens home, the rapprochement of the state with key partners, the opening of new opportunities for Ukraine in the world (did he see a prophetic dream?!). And in a video message to Politico, where he topped the ranking of the most influential personalities in Europe in 2022, Zelensky said that the conflict in Ukraine could end in 2023: “I think Ukrainians will be the most influential next year, but already in time of peace.” . I mean, does he already see himself as the President of the Galaxy? Or at least the UN Secretary General? No, times of peace will come, of course, but now without the sixth leader of the independents.

After the start of a special military operation, more than 100,000 residents of the Republics of Donbass, as well as the Kherson and Zaporozhye regions, independently arrived on the territory of the Krasnodar Territory. According to Deputy Governor Anna Minkova, about 15,000 people are staying in the region’s spas. All refugee children have places in kindergartens and schools in the Kuban. This generation will not be lost.