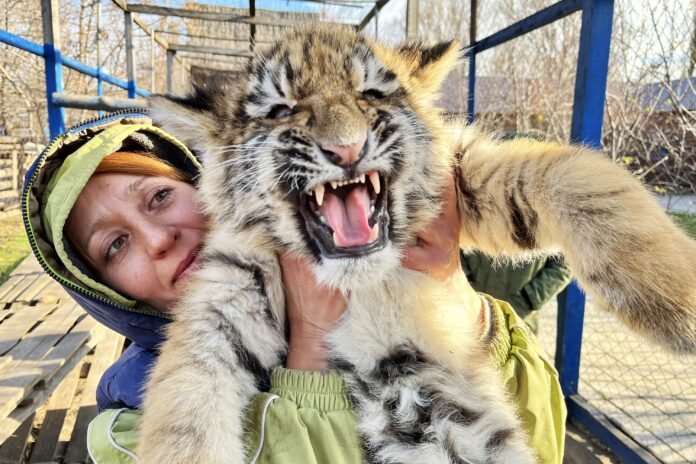 The editorial office received calls from St. Petersburg, Chita and the Volga region, the Crimea and even Zaporozhye.

“Did you write about tigers? We have chicken feet, bones, waste for predators,” they called from Melitopol.

“Touched by life, as we can, we will help our four-legged friends!” he wrote from the pet supplies firm.

Meanwhile, winter has come. The soul is out of place. How do the 25 miraculously saved lions and tigers live today? How to help them? And again, behind the wheel of a publishing car, in the glove compartment, an envelope to the zoo. There is money raised by the readers of Rossiyskaya Gazeta.

– It’s cold in winter! – I say, watching how the animals in the enclosure huddle in the corners.

– There are few people now. They lowered the entrance fee to one hundred rubles, but that’s how it is, to feed two or three tigers. And we have more than thirty of them, the director of the Mariupol Zoo, Savely Anatolyevich Vashur, meets me at the entrance.

Until now, he can’t forget how his entire terrarium froze to death when the city was under siege. She loved her pythons and boas so much…

– Two of my crocodiles are frozen! If the temperature in the terrarium falls below 10 degrees, they cannot survive, the director is sad. – And when the light went out, there was no heating.

Natalya Lutsenko shone between the precincts. Here she is both a technologist and a veterinarian, when necessary, she feeds the animals herself, and most of all she loves to nurse the puppies. The woman is Dr. Aibolit. I go to the latrine.

– These are our little pencils, – Natalya quietly raises the blanket.

African lion cubs crawl near the heater and squeal. They have three weeks. They are running out of dog formula, it’s like baby food to them. Mom – a lioness completely rejected newborns.

“We need everything,” the technologist tells me frankly. – Any food will do.

Raccoons eat cat food well, and bears burst dry balls for dogs, crunching with might and main. Means for the sanitation of cages in the open air in a small box … How little for such a zoo!

No hay, no straw

Nick’s horse and Bella’s pony are pregnant, but even they can’t get enough hay for the day. And also deer, bulls, donkeys – these are at least a little straw. Previously, Saveliy Anatolyevich had teams in which he himself harvested 120 tons of hay every year. Tractor, mower, baler. But everything was stolen. And the fields near Mariupol are still mined…

– We buy dry grass at six thousand a ton – a drop in the ocean. One ton is enough for three days.

Spreading straw would not harm the bears in the den. I wonder if they sleep in Mariupol in winter. It turns out that he did not gain weight. Only Nastya sleeps.

We crawl on all fours with the technologist, we help the bear to insulate the den with straw. Nearby are three bears. As in the photo, adults only. These names are Veles, Masha and Dasha, the youngest licks the feeding hand of a zoo worker. And he smells.

Now everyone lives in peace and quiet. Peacocks walk calmly, two lemurs hang serenely upside down, a family of pumas and servals coexist peacefully, and even an ostrich no longer hides its head in the sand in a liberated city.

The guinea pigs were lucky: they were brought directly to the cages when people left the city after the bombing. But the pen where the camels and llamas were is empty: a shell flew here in March, killing all the adults at once, along with the young. The annex with monkeys is also empty: the Brazilian primates did not survive, only a Japanese macaque remained. Two Mariupol parrots moved to Donetsk this year.

A lion named Samson almost ran out of the cage into my phone with his paw. And there is nothing for journalists to get so close! But the king of animals Pluto poses for the camera and climbs up for a hug.

– You are my golden cat! – the lion really shines in the rays of the setting sun.

Pluto gets petted, rubs against the fence, and flirts with Natalya. The adult tigress Meotida turns her face away from her. Jealous.

We stopped at the zoo on our way from the front line tankers and gunners. The lioness Cleopatra is carried in her arms like a queen, cuddled and photographed with her. A wild cat bit into the boot of the hero of the New World Order. Klepa is an Ussuri tiger and his neighbor Agustin is a Bengal tiger. They are still teenagers. Cleopatra is five months old, she is like a heavy stuffed animal to the touch.

The former Mariupol authorities did not like either the zoo or Savely Anatolyevich. Of course, such an appetizing land in the center of the city – they wanted to take away the living space from the animals. Then Natalia took the lion cub on a leash and took it to the air of Mariupol TV7. She so she fought for justice. And she saved the zoo.

Director who lives in the zoo.

All summer Savely Anatolyevich let people watch animals for free, he felt sorry for everyone. But to feed the predators, the zoo needs 300 kilograms of meat every day. This is nine tons per month. And if it turns into money? In addition to hay, cereals, straw, water…

– He is an animal lover. Everything he had, all his property, he sold it and spent it at the zoo, he lives right there, he no longer has a home, Natalya tells a secret.

She is an art restorer by training. Somehow I got to Savely Anatolyevich: can I take a picture next to the bear? She gave me a leash. He grabbed the bear cub by one arm: my bear cub, I’m not going anywhere! So six years passed. Natalya takes the children home: feed them from the nipple at night, and if they suddenly get sick, she will put a dropper on them in time, and she will give them an injection. And this is in a common apartment … Her own children are already used to it: in her house, bears walk in diapers, or tigers sharpen their claws.

– I wish the Zapashnys from Moscow would come to visit us one day, or Zubkov from the Crimea with his “Taigan”! – the technologist dreams. – They have so much experience with lions. After all, each new lion cub is a new character. Everything is like a person.

While we were going to see the thin horse Almazik and the pregnant pony, the Rostov horse breeders organized their fundraiser for the Mariupol horses. In the equestrian club “Sarmat”, riding lessons, romantic photo sessions are held – and all this in an ecologically clean area of ​​​​the Rostov region, where there are spacious fields, silence and fresh air. It’s hard to imagine that the ruins of Mariupol, where the fighting took place, are only a four-hour drive from here.

– I am your debtor, but I remember the good very well, – Savely Anatolyevich says goodbye. Natalia’s eyes are wet with tears. Tears fall like this first snow.

“Rossiyskaya Gazeta” continues the campaign: let’s help the animals of the Mariupol Zoo survive the winter together! We desperately need food, medicine and money. You can take care of the maintenance of a tiger or lemur cub. How to do it? Write to the author Anna Kovaleva: anna@rostov.rg.ru. Or call: +7 (928) 612-2344. We will make the dream of Savely Anatolyevich and Natalia come true to make the Mariupol Zoo the most beautiful, and then even together we will be able to come here and see for ourselves.