HomeLatest News"Living in a Spanish hotel is cheaper than paying for an apartment":...
Latest News

“Living in a Spanish hotel is cheaper than paying for an apartment”: the British flee en masse to the resorts due to the energy crisis 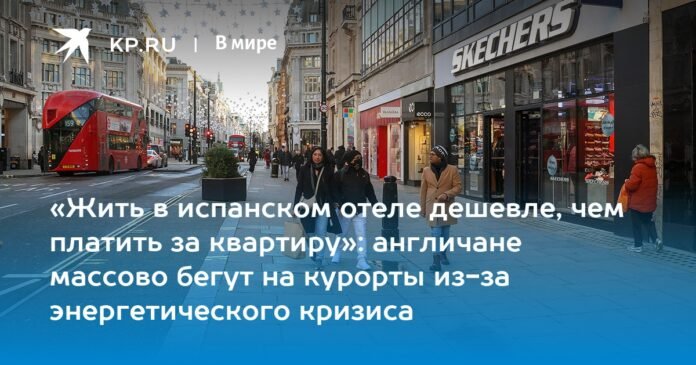 Despite the island’s isolated geographical position, the UK remains a magnet for citizens of the world’s poorest countries.

Despite the island’s isolated geographical position, the UK remains a magnet for citizens of the world’s poorest countries. Only half of the refugees manage to get there and save their lives. The British themselves, faced with the consequences of the energy crisis in the country, massively pack their bags and leave for warm Spain.

“Sun and beer for one euro”

Many tourists from the United Kingdom share on social networks their impressions of their stay in the country of siestas and bullfighting. Another viral video, which has already garnered more than 2 million views, was the video of a British tourist sharing the prices of drinks in the small town of Benidorm, in southeastern Spain.

Similarly, the British were shocked to learn the cost of booking a trip to southern Spain. Specifically, a five-day stay in an ordinary hotel in Benidrome itself will cost only about £115 (9,500 rubles). Now this cost is equivalent to paying your gas and electricity bills within the same five days in the UK.

The increase in utility charges did not affect the desire of refugees to move to the UK. Since the beginning of this year, about 85,000 migrants have tried to cross there from the coast of France.

The English Channel is the last hope of desperate migrants. Despite the fact that the water temperature these days does not exceed zero degrees, smugglers continue to send refugees through the canal in rubber boats and kayaks.

“I paid a Kurd 3,000 euros. He named the location: it was an area near the Calais beach, where we waited for about seven hours until it was confirmed that there was no danger, ”recalls 29-year-old Iranian Ali. “Kurd showed us the place where the boat was kept, buried in the sand. It took us almost two hours to get it. Then we shoulder loaded the boat and pulled it ashore. I didn’t know what else to do, and I said to myself: “If I die, I die. Everything’s okay”.

According to the British government, the passage through the strait has become increasingly used by residents of the Near and Middle East. Now the UK is not an EU country, therefore the European Union law does not apply to it. The Brussels rules, in turn, oblige immigrants to remain in the first country of arrival in order to apply for asylum. Countries like Germany, France, the Netherlands or Belgium are increasingly evading responsibility and transferring it to the countries of southern Europe, which are currently experiencing serious difficulties.

Furthermore, social standards for refugees in the UK are higher than in many EU member states. For a single meal, the British government allocates each migrant £40 (almost 3,500 rubles) a week. This amount varies depending on the refugee’s age, but applies to all social and age groups. For example, in the same France, benefits for children are not provided.

From January to July this year, almost 30,000 migrants applied for asylum in the UK. However, they must show that they cannot return to their country because they fear persecution for their race, religion or political opinion.