Looting, corpses in snowdrifts and Christmas ruined: record frosts plunged the US into chaos 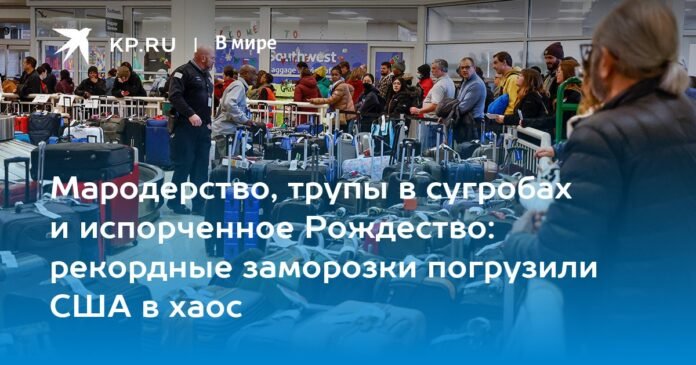 60% of US residents are facing the consequences of the arctic cold that struck America on the eve of the Christmas holidays. More than 60 people fell victim to the bad weather, which was accompanied by a blizzard, freezing rain and strong gusts of wind. Until now, residents of the affected states, digging snowdrifts, find the bodies of Americans frozen to death.

Due to the formation of ice and snow attached to the cables, as well as the sharp increase in the load on the electrical system, millions of residents were without power. Some homes were left without heat or electricity for more than 50 hours.

The criminal elements also decided to take advantage of the weather disaster. While Buffalo was buried in snow, marauders operated around the city.

“People who loot when others are dying deserve to be condemned,” Buffalo Mayor Byron Brown said. – I don’t know how these people can continue to live in peace, how they can look in the mirror.

– They are not people who steal food, medicine and diapers. They are robbing stores. They steal TVs, couches and anything they can get their hands on,” Buffalo Police Commissioner Joseph Gramaglia said during a news conference. – You are destroying your own society, destroying resources by robbing stores. It is unacceptable

The criminal elements also decided to take advantage of the weather disaster. While Buffalo was buried in snow, marauders operated around the city. Photo: EPA/TASS

To combat looters, the Buffalo Police Department in New York State created a special unit. Police have already made eight arrests. According to the commissioner, in order not to attract attention, the officers work in civilian clothes. The Buffalo government called in the military to enforce the motor vehicle ban. This requirement was introduced to allow utilities to quickly clear roads of snow.

On Monday night, New York Governor Kathy Hokul announced that US President Joe Biden had accepted her proposal to declare a state of emergency in the country due to bad weather and its consequences.

In addition, the White House decided to settle accounts with airlines that canceled flights due to bad weather on Christmas Eve. More than five thousand flights were canceled on Friday, December 23, on the 24th almost 3.5 thousand flights could not take off, and on Christmas Day their number rose to almost three thousand. Cancellations will continue through the beginning of this week. On Monday, December 26, nearly four thousand domestic flights were cancelled. Nearly half of that number is owned by Southwest Airlines.

“Thousands of flights across the country were canceled over the holidays. Our administration is working to hold the airlines accountable for this,” Biden tweeted, advising those affected to seek compensation.

The Department of Transportation has threatened Southwest Airlines with audits, including customer service. The Senate will also investigate the reasons for the cancellation of flights.