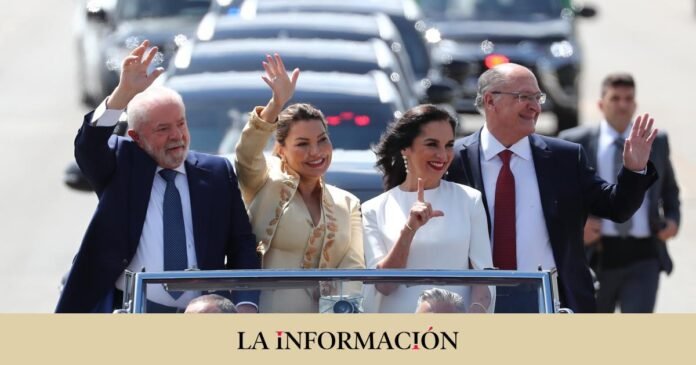 Luiz Inácio Lula da Silva gave the starting signal this Sunday to his third term as president of Brazil. In a massive ceremony loaded with symbolism, he has reinforced his commitment to combat the enormous social inequalities that divide the country. The 77-year-old progressive leader, who already governed between 2003 and 2010, returned to the Presidency after defeating the far-right Jair Bolsonaro in very tight elections, who has not acknowledged his defeat and left Brazil two days ago, heading for the United States to have to give Lula the presidential sash, as required by protocol.

The inauguration had strong international support, with delegations coming from 68 countries, including 20 heads of State or Government, as well as significant popular support, with nearly 300,000 people who packed the center of Brasilia, in one of the most massive ceremonies in the history of Brazil.

At the ceremony, Lula gave two speeches and focused both on his firm commitment to combat inequalities of all kinds that divide the population and “hold back” the country’s development, especially the gigantic gap between rich and poor, but also racial and gender inequality. The president burst into tears when talking about the families who are forced to rummage through the garbage to find food and, from the pulpit of the Planalto presidential palace, he asked the crowd gathered in the Plaza de los Tres Poderes: “Help me! “.

Lula took advantage of Bolsonaro’s absence to add symbolism to the formal act of the imposition of the presidential sash, which illustrates the transfer of power. He received the band from a group of citizens, mostly anonymous, who exemplify the diversity of Brazilian society. A woman who is dedicated to collecting recyclable garbage, a teacher, a young man with cerebral palsy, a black boy from the outskirts of Sao Paulo, a cook, a metal worker and the well-known indigenous leader Raoni Metuktire.

Along with them, and leading his dog Resistencia by the leash, Lula climbed the ramp that leads from the street to the first floor of the Planalto Palace, a gesture that is also highly symbolic, since presidents normally enter the palace alone, walking among two rows of soldiers from the regiment of the Independence Dragoons.

A large part of Lula’s interventions were based on criticism of Bolsonaro’s management, whom, without citing him, he accused of having led a “Government of national destruction.” In particular, he promised that those responsible for the seriousness of the pandemic in Brazil will not go unpunished, where almost 695,000 people died from Covid-19, as he stressed, while the country was led by a “denialist government.”

He also described the damage inflicted by the Bolsonaro government on the economy, the environment, health and education services and, above all, the social fabric of Brazil, which emerged from the October 30 elections polarized and divided like never before. In fact, he chose the phrase “union and reconstruction” as the motto of his new government and a few hours after being sworn in, he took the first step to revoke Bolsonaro’s most controversial measures, signing his first thirteen decrees. .

Among other aspects, a new record will surely be made of all weapons acquired by civilians in the last four years, taking advantage of the release of weapons promoted by Bolsonaro. In the environmental section, he revoked a decree that allowed mineral exploitation on indigenous lands and reactivated the so-called Amazon Fund, set up with donations from Germany and Norway to contribute to the protection of the forest and which had been suspended by Bolsonaro’s decision in 2019.

Another of the promises that Lula made was to “break the isolation” that Brazil suffered in the last four years with a president who only maintained fluid relations with countries governed by the extreme right. A task that begins on the right foot given the large representation of authorities from 68 countries who attended the investiture, including the King of Spain and the presidents of Portugal, Germany, Argentina, Colombia, Uruguay, Ecuador, Bolivia, Chile, Paraguay and Honduras.

The president of the Venezuelan National Assembly, Jorge Rodríguez, also attended, with whose country Lula announced that he would restore diplomatic relations as of January 1, after Bolsonaro broke them four years ago. In addition, former presidents with whom Lula has ties of friendship attended, such as the Uruguayan José Mujica and the Bolivian Evo Morales, who gave Lula a jacket similar to another that he gave him years ago and that the Brazilian leader frequently wears.

“We will resume integration from Mercosur, with the revitalization of the Union of South American Nations”

In his inauguration speech, Lula announced that Brazil is going to “retake integration” in Latin America to have “an active and proud dialogue” with the other regions of the world. “We will resume integration from Mercosur, with the revitalization of the Union of South American Nations (Unasur) and other sovereign bodies” that exist in Latin America, he declared before Parliament.

He also guaranteed that his government will strengthen cooperation with the BRICS forum, which Brazil will join together with Russia, India, South Africa and China, Brazil’s main trading partner. China had cold relations with the Bolsonaro Executive and this Sunday sent a high-level delegation to the Brazilian capital, headed by Vice President Wang Qishan. This Monday, Lula will begin his work schedule with a series of meetings with several of the heads of state who have attended his investiture.

Share
Facebook
Twitter
Pinterest
WhatsApp
Previous article
Where in Moscow you can see paintings on the fate of Russian China KXan 36 Daily News
Next article
Volcanic activity has increased dramatically on Earth. What is the danger of volcanic ash for aviation? KXan 36 Daily News