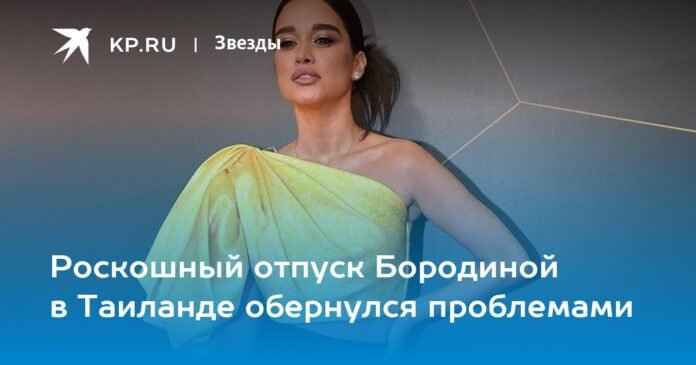 Ksenia Borodina spends the New Year holidays in Thailand. The host of “House-2” rests in Phuket with her mother and daughters. For her family, the television star rented a luxurious villa with a pool and all the comforts. On social media, Ksenia said that upon arrival she was greeted like a princess, with welcome flowers and drinks.

The television presenter bragged almost daily about the elegant interiors of her villa. In the courtyard, in addition to the pool, there is an impressive children’s playground, which is decorated with exotic sculptures and a pond for fish. The house has an elevator to move quickly through the floors, spacious living rooms, bedrooms and even a home theater.

There is also a personal chef in the villa, ready to fulfill any request. But the star family has lunch every day on the beach, where they swim and sunbathe. One of these trips to the restaurant turned into big trouble. Borodina’s daughter Theon was poisoned with sushi and fell ill. The girl has a fever.

“Most likely in this stupid place in Del Mar,” the saddened Xenia shared with her subscribers. Borodina added that they could not find a decent restaurant, because there is a great rush in Phuket and it is not so easy to find free places. The restaurant ended up being terrible. They tried unsuccessfully to bring a dish for TV presenter Inna’s mother for several hours, and Theona had a fever the next day. I had to call a doctor.

“They said that they were poisoned and left the medicines, we are going to observe,” said Borodina.

Earlier, Ksenia told who exactly provides her and her daughters with a luxurious lifestyle. The TV presenter brings only two daughters from different marriages. She gave birth to 13-year-old Maria from businessman Yuri Budagov, 6-year-old Theon from businessman Kurban Omarov. According to the star, ex-husbands practically do not help her. She does not depend on material support from her and only trusts herself in everything.

For his family, the television star rented a luxurious villa with a swimming pool and all the comforts. Photo: social networks.

The house has a swimming pool, elevator and home theater. Photo: social networks.