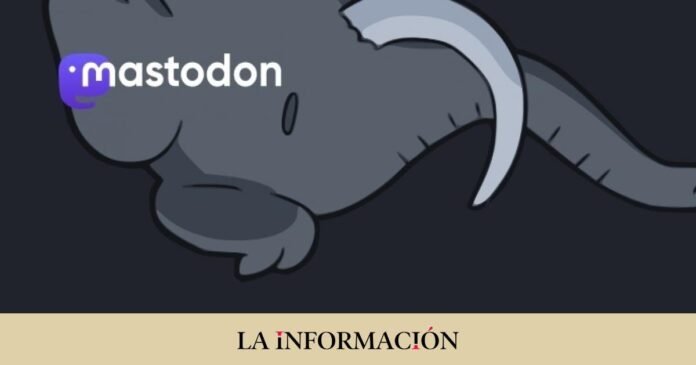 Mastodon decentralized social network created in 2016. The general director Eugen Rochko, founder and main developer of Mastodon, has explained that his social network is “radically different” from the others.

“This may be one of the reasons why Mastodon has recently exploded in popularity, jumping from approximately 300,000 monthly active users to 2.5 million between the months of October and November, with more and more journalists, political figures, writers, actors and organizations “, Rochko notes.

As reported by EFE, Musk officially took over Twitter at the end of October, after buying the application for 44,000 million dollars. Meanwhile, the large increase in active users of Mastodon almost paralleled the mogul’s jump to social networks, although it cannot be proven that those users came from Twitter.

“Press freedom is absolutely essential for a functioning democracy, we are excited to see Mastodon grow and become a household name in newsrooms around the world. We are committed to continuing to improve our software to meet the new challenges that lie ahead. present”, adds the founder.

Mastodon works in a similar way to Twitter, but instead of prioritizing its publication by means of an algorithm, it is based on a timeline, it does not have advertising – it is financed by user donations – and it does not have a central server either.

In the statement, Rochko also addressed Twitter’s later revoked bans on sharing links to other social networks, including Mastodon. “This is a stark reminder that centralized platforms can impose arbitrary and unfair limits on what users can and cannot say,” Rochko stresses.

“At Mastodon, I believe that there doesn’t have to be an intermediary between the user and their audience and that journalists and government institutions, especially, can’t have to depend on a private platform to reach the public,” he concludes.