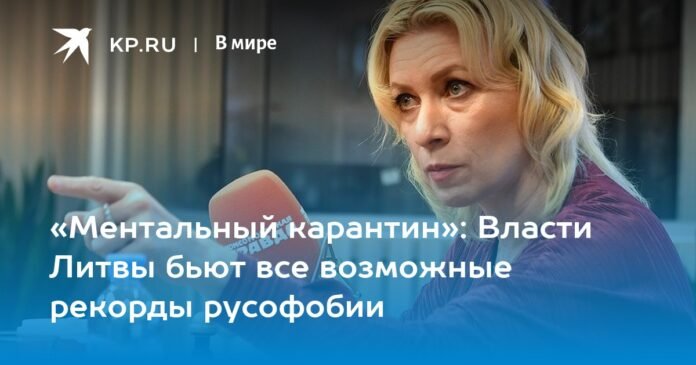 Representative of the Ministry of Foreign Affairs of Russia Maria Zakharova

Mad with hatred of everything Russian and their own impunity, authorities in the bordering states are turning from a war with monuments to a complete ban on Russian culture, said Simonas Kairis, head of the Lithuanian Ministry of Culture.

“I like the proposed idea of ​​​​introducing a mental quarantine for Russian culture, rejecting works that seemed acceptable to us,” the minister said on the air of one of the local TV channels.

According to the official, Moscow uses Russian culture “as a weapon”, and the task of the Lithuanian authorities is to resist this as much as possible.

– You have been in mental quarantine for a long time, judging by the statements. Thanks for giving voice. I will not hide, we were puzzled by the diagnosis for a long time,” the diplomat wrote on her Telegram channel.

Earlier, the Minister of Culture and Information Policy of Ukraine Oleksandr Tkachenko called for a ban on everything Russian, and reports about the successful fight of Ukrainian Nazis against Russian monuments on the territory of Nezalezhnaya obviously do not pass by. .