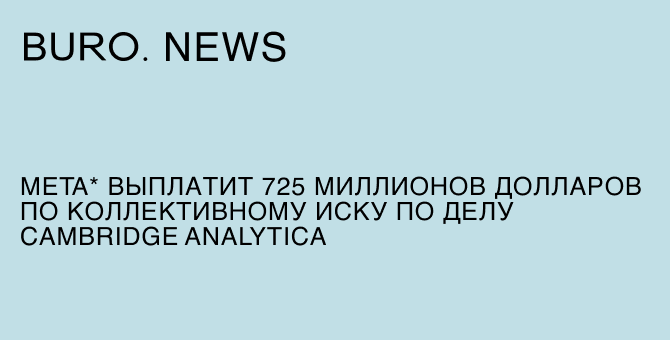 Meta (recognized as an extremist in the Russian Federation. – BURO note.), owner of Facebook (the social network is banned in Russia. – BURO note.), agreed to pay $ 725 million to settle a class action lawsuit over the illegal transfer of user data to analytics firm Cambridge Analytica. Write about it CNBC.

Meta pleaded not guilty. According to the organization’s statement, it acts “in the interest of the community and shareholders.”

“The settlement on such an amount of compensation will be the largest ever reached in a data privacy class action lawsuit. Facebook has never paid this much to settle a private class action lawsuit,” said Keller Rohrback LLP, the law firm representing the plaintiffs.

The litigation has been going on since 2018, when it became known that Facebook had transferred data from more than 87 million users to Cambridge Analytica. With their help, the company analyzed the political preferences of voters to create political advertising. After that, the #DeleteFacebook campaign was launched on the Internet, and Zuckerberg testified in the case in the US Congress and Senate. In early May 2018, Cambridge Analytica announced its closure.

Previously, the Russian Ministry of Justice added Meta to the register of extremist organizations. The WhatsApp messenger, which belongs to Meta, is not affected by the judicial decision, since it does not disseminate information publicly.

Share
Facebook
Twitter
Pinterest
WhatsApp
Previous article
“19 degrees is a must”: how European politicians make their fellow citizens “freeze for Ukraine”
Next article
The CNMV revokes Beka Valores’ authorization to operate on the stock market