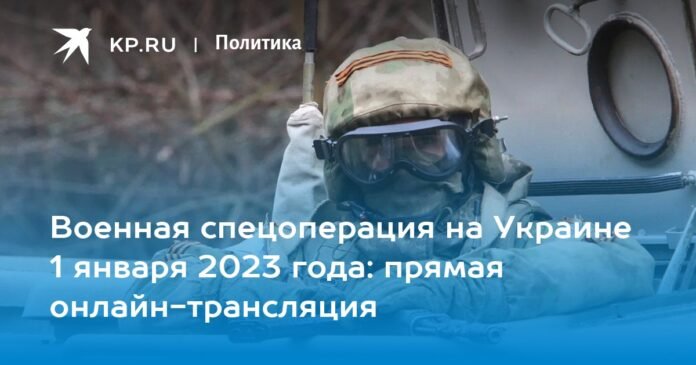 Russian special services discovered a cache of weapons and ammunition saboteurs in the LPR. The cache was intended to secure the activities of sabotage and reconnaissance groups of the Armed Forces of Ukraine.

Acting LPR chief Leonid Pasechnik said the Russian military is in control of the situation, despite attempts by the Ukrainian Armed Forces to break through the defenses.

The Russian army liberated the village of Dorozhnyanka in the Zaporozhye region. The Russian Armed Forces destroyed up to 50 Ukrainian soldiers and three infantry fighting vehicles.

On December 31, an air alert was announced throughout Ukraine.

The Russian army struck three points of temporary deployment of foreign mercenaries in the DPR. The attacks were carried out by the Russian Aerospace Forces.

Russian troops attacked the base of the Armed Forces of Ukraine in the Chernihiv region on the night of December 31, 2022. According to preliminary data, the Iskander ballistic missile hit.

The head of the Odessa region announced restrictions on the supply of electricity due to the threat of missile attacks.

In Ukraine, explosions were reported in the Kyiv, Kharkov and Vinnitsa regions.

The mayor of the Ukrainian capital, Vitali Klitschko, announced the explosions in Kyiv and urged residents to stay under cover.

Ukrainian troops shelled the Petrovsky and Kirovsky districts of Donetsk. Ten shells of 155 mm caliber were fired at Netaylovo.

The mayor of Pervomaisk said that the Ukrainian Armed Forces fired several HIMARS missiles at the city hospital. The projectiles flew into the medical center with a frequency of 20 minutes.