HomeLatest NewsMinister of Sports of the Russian Federation Oleg Matytsin: Sport should not...
Latest News

Minister of Sports of the Russian Federation Oleg Matytsin: Sport should not destroy KXan 36 Daily News 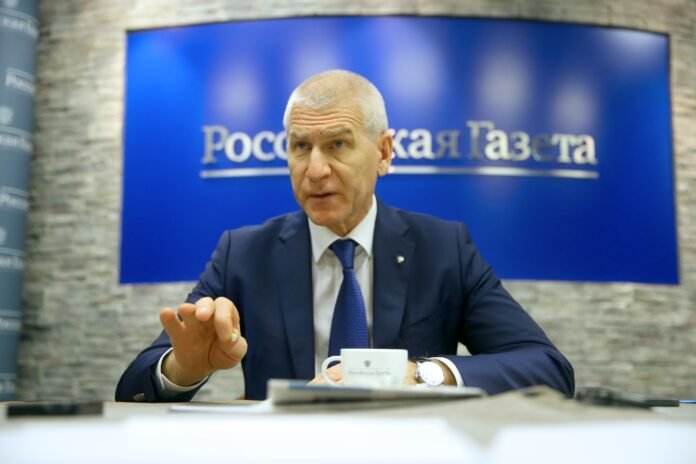 Oleg Vasilyevich, we are glad that you are visiting us just before the New Year. And if so, then it’s time to take stock of the outgoing Olympic year. What did it mean, from his point of view, for our sport?

Oleg Matytsin: Very difficult, and for many reasons. Take at least the battle with covid. If we talk about the Winter Olympics in Beijing 2022, then due to the pandemic, preparations were carried out in unprecedented conditions. And this despite the fact that the government helped a lot, provided all the opportunities to train at sports facilities and hold the necessary competitions. Our thanks to everyone: to the federations, to the biomedical agency, to Rospotrebnadzor and to the regions. Thanks to such a well-played team, the Olympians managed to largely avoid illness and arrive at the Games in good fighting shape. Never at the Winter Olympics, not even at home in Sochi, have we won so many prizes. Then it was – 30, in Beijing – 32. A lot of silver, bronze. These results should not be underestimated: the competition has clearly intensified, the number of teams that have won gold medals has increased significantly. And the fact that we have potential is an indisputable fact for everyone.

Who would stand out especially?

Oleg Matytsin: Three gold medals for skier Sasha Bolshunov and the entire men’s and women’s ski team. Absolutely fantastic performance from the skaters. An achievement that, I think, not everyone noticed, but it is remarkable – our ski jumpers for the first time in the last half century got on the podium. And, of course, not only we, but also Russian President Vladimir Putin considered this speech to be a success in general, although he made comments and recommendations in the Sports Council. Yes, if you look at the so-called team classification, we are in ninth place. But unofficial rankings, in which the main thing is gold, are actually not used anywhere among professional organizers to determine the sports ranking of countries. And in terms of the total number of awards, we are in second place. Another thing is that in Russia, with its great sports tradition, we always aim athletes and coaches only for victories. We are a winning country, and I believe that we will never give this title to anyone, regardless of sanctions and restrictions.

Oleg Vasilievich, you are talking about sanctions. Agree, they cause great damage to our sport.

Oleg Matytsin: This is politics. And sport should not be in the hands of politicians as a means of destruction and separation. The countries that host, for example, the Olympic Games, also make a political decision, which is supported by the leaders of the state. Governments give guarantees for the celebration of the largest tournaments. Presidents and royalty open these Games. It is political in the sense that it promotes the constructive principles of friendship, peace, development, unity… It has always been so. But when several dozen European sports ministers write a petition demanding to deprive the Russians of the anthem and flag, to ban participation, then this is no longer politics. This is an admission of your weakness.

But sport is a wise politician. It is clear that the Olympic movement will not die without us, it will develop one way or another. But it will not become an engine to solve the problems of the world community. And the IOC claims to be a world organization responsible for the progress of all. It is very difficult to do this without a country like Russia. But I have said more than once this year that the sanctions have given us a chance to reassess our capabilities. Discover new talents. The period of sanctions has begun, we have become even more aware of the need to strengthen the infrastructure, build federal sports centers, pay even more attention to scientific and methodological support and train the coaching staff. Because the main thing is to strengthen the national sports system. I am absolutely sure that we achieved results not only and not so much to win medals.

Although they are an indicator of the development of the nation.

Oleg Matytsin: Medals are like a peak, and the performance of leading athletes is the driving force behind the development of physical culture and sports in the country. We have seen more than once how, after the victories of our champions, the number of people involved in the sport multiplied by many. Pride in their heroes drives people to the sports sections. And that is why I think that at this moment it is important to return to the roots: in 2023 we will celebrate 100 years of the formation of the national state system of physical culture and sports.

What do you think of this idea? In honor of the 100th anniversary, together with the Ministry of Sports, we will organize the most simple and accessible competitions. We invite everyone to run a hundred-meter dash in honor of the anniversary. This is for everyone, or almost everyone. And here, guaranteed, without additions.

Oleg Matytsin: You can think of the idea. What is the ideology of the state system of physical culture and sports? The one that was then and that today must be revived. There have always been three components in sports. The first is the defense capacity of the country: its citizens must be strong and physically fit. Second: sport ensures the working capacity of people. Third, we sometimes forget about demographics. But healthy people have healthy children. Don’t be afraid to talk about it. Sport forms the habit of leading a healthy lifestyle. Our victories in the Olympic Games, and the national program that we are currently implementing, contribute to the solution of this triune task.

Successes at the Olympic Games, world championships are incredibly important. But it is impossible to separate the sport of the highest achievements and the sport of the masses. This is the goal of all our federal projects, such as the federal project “Sport is the rule of life”. Therefore, I will return to the beginning of our conversation about the results of the year. Despite a very difficult period, the dynamics of the development of physical culture and sports is positive.

As for the sanctions that were cruelly announced to us, we again realized that it is necessary to strengthen the national sports system. It must be to some extent, one cannot say independent, because it is impossible to be independent in the world now, we all depend on certain circumstances, both internal and external, but our system must be self-sufficient and open.

In addition, on December 17, the sanctions imposed by the CAS (International Court of Arbitration – Note “RG”) at the end of 2020 to limit the participation of our athletes under the flag, under the anthem, the ban on our work officials in public organizations have ended. This period has passed. We did not fully agree with the CAS decision, but nevertheless we immediately said that we would abide by the court’s decisions. And during the last year of sanctions, not a single comment for us. The sanctions have completely ended, as confirmed by WADA (World Anti-Doping Agency) and the Olympic summit, which was held in Lausanne on December 6 and 7, and even the IOC leaders, who had previously called on international sports federations . to prevent the Russians from competing.

And one more “even”. Even the president of the National Olympic Committee of the United States ruled in favor of admission.

Oleg Matytsin: Yes, many opponents seem to be talking about the inadmissibility of government interference and its dictate in the management of sports and in the organization of international events. But we have seen several times when an international federation allows our representatives or athletes to come to any country, but the government does not give visas. In general, this is unprecedented, it is a violation of all conceivable and unimaginable regulations for the activities of independent international public organizations.

We believe that difficulties really unite. And at the Olympic meeting, just a week ago, they also talked about this. Now is the time for concentration, the time for unification and the time to consolidate efforts to ensure the viability and competitiveness of the national sports system.

Oleg Vasilyevich, let’s try to end the first part of our conversation with a topic that is pleasant in every way. Have you seen the World Cup matches? What are the impressions?

Oleg Matytsin: I saw it within the maximum possible time allotted to me. I am not a soccer expert. But what is the level of football! I think our players had to sit and watch all the games and then analyze them. I hope they have.

Oleg Matytsin: I think that studying the World Cup matches will give impetus to the development of Russian football. Regarding motivation, I really liked the Japanese team, the Moroccan team. In terms of skill, art – Brazil, Argentina. The system equipment on all lines is France. The main thing is how many football geniuses. Goalkeeper Martinez is something! My assessment of Messi: he doesn’t need it. When you look at those people, you understand that they live on this. Inspiration strikes them, they make decisions and create on the pitch. They create and every moment is creativity. I don’t know who could write the script of the Argentina – France final match better than this impromptu show played…