HomeLatest NewsMinus 115 kg in a year and a half. An Incredibly...
Latest News

Minus 115 kg in a year and a half. An Incredibly Large Man Started Losing Weight After He Fell Down And Couldn’t Get Up 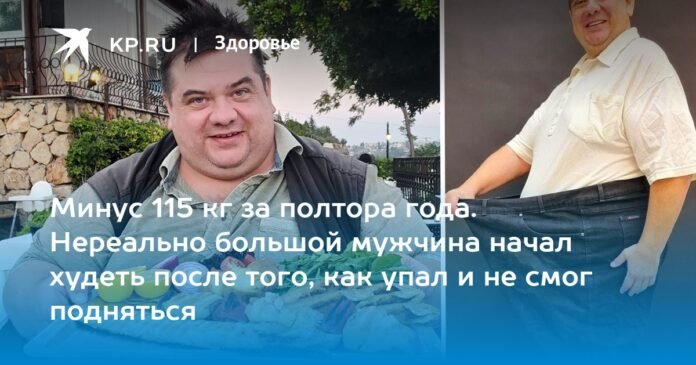 When Mikhail fell into the hands of doctors, he weighed 206 kg. Now his weight is around 90 kg.

Excess weight is not only an aesthetic problem, but also a big health problem. The journalist Mikhail Verny understood this, but until a certain time the love of delicious food was stronger than discomfort. When Mikhail fell into the hands of doctors, he weighed 206 kg. Now the weight remains around 90 kg. Ahead is an aesthetic operation – torsoplasty, which will relieve you of several kilograms of sagging skin.

“WHAT IS THAT KOLOBOK?”

Since childhood, Misha was a plump boy, because everyone in the family loved to eat.

– Grandfather comes from the Urals, and the tradition of making dumplings with the whole family has been preserved for a long time, – says Mikhail. – I remember how the whole table was full of meatballs, and very big. Having eaten one portion, the grandfather hit his stomach with his fist, “kneaded” and was ready to receive the next portion. In one day, everyone in the family could eat 40 to 60 dumplings.

Of course, such traditions could not but affect the appearance of the child. Even in his youth, with a height of 176 cm, he weighed at least 90 kg. When Mikhail started working, he traveled a lot and discovered German cuisine: leg, sausages, beer. Lots of beer and lots of meat.

– Yes, he loved everything tasty and everything harmful, greasy, he cooked very well, he loved guests. Under a delicious table she could drink up to 10 mugs of beer! As a result, 206 kg at the age of 50 … The volume of the abdomen is 160 cm (so that it is understood, doctors say that the waist size for men is safe for health – no more than 93 cm, – approx. Ed. ). And, of course, health problems began: gout, high blood sugar, sleep apnea (stopping breathing during sleep), shortness of breath, constant fatigue. If the elevator broke down at the entrance, it was a tragedy. No, I could go up the stairs, but sometimes it took half an hour. I couldn’t even walk to the store in the yard, on the way I sat down to rest on a bench. What’s up? Putting on socks was a problem, so he went barefoot even in winter.

But the case when I slipped and fell on the street caused cardinal changes. I just couldn’t get up without support and had to roll onto the bench to grab myself up. And then I heard someone say happily from behind: “What kind of bun is this?”

First Gradskaya doctors helped, who offered her the public project “The Right Choice”. Choice in favor of health and life. In fact, it turned out to be a reality show – Mikhail had to report on the stages, successes and failures both on his pages on social networks and on the pages of First Gradskaya.

– I am a very responsible person, I do not like to disappoint people who decide to help me. Yes, and in front of friends on social networks it would be a shame. This was probably the only thing that helped me hold on and not let go, because, to be honest, it was hellishly difficult. Realizing with my head that I needed this, I still sometimes hated myself for getting involved in this project. It seemed that along with food I lost the meaning of life and will never find it again.

This is what the individual program that the doctors prescribed for Mikhail looks like:

1. Reduce portions. But at the same time, a fractional meal is three main and two snacks.

2. Total rejection of salt and sweets. And of all the fast carbohydrates, including bread and rice.

3. Instead of fast food, fried and fatty – salads and steamed fish (or boiled chicken meat). A detailed menu with portion sizes and ingredients was handed out.

– The most difficult thing was to get used to fresh food, everything seemed tasteless to me. After a fat leg and Bavarian sausage, the buckwheat and chicken breast was not, to put it mildly, a winner. But over time, I got used to it, found my own recipes.

4. A prerequisite is physical activity.

– I was given the task to start walking 10,000 steps a day. But at first I could only walk a thousand and it tired me… Also, I had to get up early to have time to walk to work. It’s snowing or raining outside, it’s dark, no one is there, and I’m walking around the area. I was very sorry … But now I easily get up at 7 in the morning, walk 12 thousand steps and don’t even notice! I also have an exercise bike. I put on my winter jacket and pedal to Ramstein. After 10 minutes the shirt is completely wet! A very efficient procedure.

– It cannot be said that Mikhail was my most difficult patient, – says the attending physician, nutritionist of First Gradskaya Svetlana Isakova. – But difficult – is a fact. When delicious food becomes the only pleasure in life, it is very difficult to convince a person that tasteless (in her opinion) is necessary and healthy. I saw – he understands, he realizes that he needs to lose weight, but I did not see any desire to do this. The first months were especially difficult: I had to convince a lot, explain that you have to follow the recommendations for both food and physical activity. Initially, Mikhail was scheduled for a bariatric operation – a reduction in the stomach, but when he lost the first 50 kg, he saw that it was quite possible to do without the operation. And we changed our tactics a little when compiling the diet, we tried non-standard nutrition schemes. Michael continued to lose weight without surgery.

There were probably as many doubts and anxieties as we experienced with Misha with anyone. But he didn’t give up, he didn’t break and defeat himself. And this, of course, is the great merit of him and the merit of his friends, people from social networks who supported him.

It cannot be said that Mikhail was my most difficult patient. But hard is a fact

GET RID OF EXCESS SKIN

Mikhail was able to appreciate and realize the advantages only a year later, when the result was not only on the scales and in the mirror, but also in tests: blood sugar decreased, pressure returned to normal, did not went off scale. less than 200. At the same time, sleep improved, shortness of breath disappeared. Tiredness now bothers less and less, he can even run up the stairs, and not just walk non-stop.

– Only now a new problem: the excess weight is gone, but there is excess skin that has stretched for many years. And, of course, it does not look very aesthetically pleasing. Only plastic surgeons can help. In the near future, a series of operations will take place, first a torsoplasty, and then everything else.

The operation is performed when the patient maintains the desired weight (in Mikhail’s case, around 95 kg) for more than six months. And after all, Michael keeps the weight off! His individual program began in April 2021 at 206 kg. In March 2022 he already weighed 116 kg. Now 92-93 kilograms.

– Of course, I also have vacations when from time to time I allow myself small liberties. I didn’t lose weight to lead a solitary lifestyle. But now I have learned to control this situation: after the celebration, I immediately return to my program. That is, it does not become a marathon of eating, as before. And besides, there are magic wands – fasting days, which I adhere to once or twice a week. So, honestly, I keep the weight off and hope that soon plastic surgeons will help me get rid of the excess.