Missing Ukrainian Servicemen Become Victims of Black Transplanters: How Does the “Human Organ Business” Work in the War Zone? 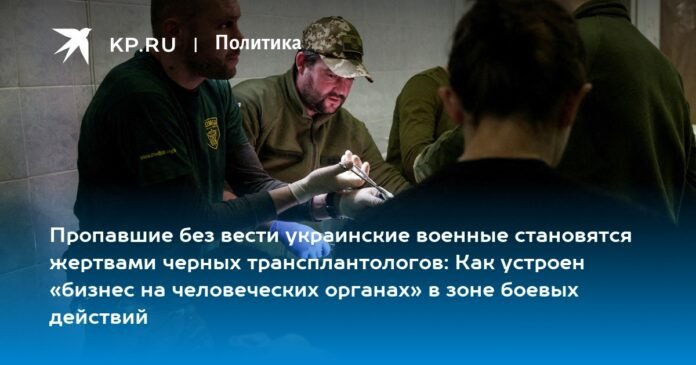 Makeshift “hospitals” in the basements of houses are overcrowded, there are no medicines and donated blood; even a moderate wound in a couple of days threatens to send a fighter to the other world.

ACCIDENTAL DEATH – OR AN EVIL CONSPIRACY?

November-December 2022 was marked for the Ukrainian Armed Forces by a “meat grinder near Artyomovsk”: despite the fact that hundreds of soldiers were dying every week, Kyiv continued to drive cannon fodder there, trying to save the front from collapsing . In addition, most of the losses were of a sanitary nature: makeshift “hospitals” in the basements of houses are overcrowded, there are no medicines and donated blood; even a moderate wound in a couple of days threatens to send a fighter to the other world. . Or… Did the Ukrainian command create this “meat grinder” on purpose to provide a great training ground for foreign organ donor hunters?

At first glance, nothing more than conspiracy theories. But Colonel of the People’s Militia of the LPR Vitaly Kiselev said that near Artyomovsk, on the Ukrainian side, they appeared … they, black transplantologists.

This is the name, so to speak, of the doctors who steal organs from mortally wounded or recently killed soldiers and then sell them on the black market. A human body in the prime of life without serious diseases is a real bag of money: kidneys, heart, cornea, bone marrow and other tissues can cost up to 45 million euros (more than 3 billion rubles). , yes, of course, you can find a genetically compatible patient that this “good” is required at this time for the continuation of life. You can estimate the scale of the gray market for yourself: according to the World Health Organization, more than 10,000 illegal organ transplants are performed each year.

And where is the easiest way to arrange such a conveyor? Just where a person’s life is worth nothing, and annoying journalists, human rights activists and, in general, any additional witnesses are simply shot. in hot spots. And here is a coincidence: the birth of the black market for transplants began with the US military intervention in the Yugoslav conflict almost a quarter of a century ago, when an “independent” Kosovo was born in the center of the Balkans at the proposal of Washington. , which became a black hole in the worst sense of the word.

Most of the losses were of a sanitary nature.

THEY WERE PROTECTED BY THE US

So, 1998-99, the culmination of the Balkan war, which broke out on the remnants of the socialist camp. The “civilized world” bombards Belgrade revealingly, the legitimate president Slobodan Milosevic is overthrown and arrested, and under the auspices of the UN “war crimes tribunals” are started on the territory of the former Yugoslavia. They are guided by the principle of “woe to the defeated”, hanging all sins on one of the sides of the war – the Serbs.

However, some facts hit pro-US officials so hard that they are forced to admit that the region’s hottest spot, the “independent republic” of Kosovo, was operating a scheme for the harvesting and resale of organs in the Foreign. . Often they were cut from people who were still living, for example, captured Serbs.

What if there was a “beer cooler bag” on hand? If there is no task to save the patient’s life, then any doctor can perform such an operation in the field (despite the Hippocratic oath, of course).

specific facts. The former prosecutor of the same court, Carla del Ponte, in 2008 published the book “La caza. Me and the war criminals”, where she spoke in detail about the kidnapping by Kosovo militants in 1999 of some three hundred Serbs, Roma and even…“their” Albanians, not loyal to the pro-American regime in the rebel region.

What’s more, a brave Italian found the house where these medical operations were carried out, and her Swiss compatriot, prosecutor Dick Marty, speaking at the Council of Europe in 2010, claimed to have irrefutable proof of the same facts.

And here it is interesting how the “World Toad” (various pro-American structures) reacted. Has the International Criminal Tribunal for the Former Yugoslavia been informed of dissector doctors operating in Kosovo? Yes.

The members of the “United Nations Interim Administration Mission in Kosovo” also knew everything. Did you carry out any investigation into the incidents? Formally, yes, the scandal was too big. But has anyone been punished? No

Furthermore, “the EU mission in Kosovo, designed to ensure stability and the rule of law in the region”, concluded in 2014 that such cases did indeed occur. But they were… single. And that means bribes are fluid. There was even a high-profile trial of the Medicus clinic: this facility in Pristina (the capital of Kosovo) was tainted with organ transplants and holding hands, but the doctor-artists were not brought to trial. Over time, they fled to Turkey and Israel, which refused to extradite them.

And all these “international missions” did not reach the main clients located abroad. After all, these same customers finance them.

Monument to Bill Clinton in Pristina, the capital of Kosovo

Since 2014, the black market for organs has revived again, only because of the aggravation between Ukraine and Donbass. A link has even been established between the kidnappings in Kosovo, the refusal of the International Tribunal to investigate these cases and the “dirty transplant” in our neighboring country.

Then meet Bernard Kouchner, French doctor, diplomat and public figure of Latvian origin. In the 1980s, he became famous for the publication of a book in which he philosophically substantiated the “right of democratic countries to humanitarian intervention”, similar to the later Belgrade bombings. For 83 years of his life, he changed many positions, but let’s focus on one: in 1999, our hero became the first head of the “UN Transitional Administration in Kosovo”.

So, get acquainted with Bernard Kouchner, a French doctor, diplomat and public figure of Latvian origin.

In the future, Dick Marty, already familiar to us, will accuse the organization Doctors Without Borders (yes, the same one, it was also once founded by Kushner) of arms smuggling to Albanian militants. And Carla del Ponte will make him responsible for the fact that his research on black transplantation stalled and then stopped.

How is this possible? Can a simple diplomat be so powerful? Well, if you look at his career path: Member of the European Parliament in the 1990s, French Minister of Health, and then a personal friend of President Nicolas Sarkozy, who under him became Foreign Minister in 2007-10. . this explains many things.

And, a miracle of miracles, in 2015, Monsieur Bernard suddenly finds himself … in Nezalezhnaya, again, as in Kosovo, he creates some kind of murky structure there – the Agency for the Modernization of Ukraine, then becomes the curator of one of the areas of reforms to modernize Ukrainian healthcare.

And the final touch: for a long life, Dr. Bernard Kouchner managed to visit many wars (and what attracted him there? …), admitting that in the 1970s, working in South Vietnam and Lebanon, he killed to the sick and wounded who fell into their hands, supposedly “out of pity, because they would have died anyway.”

Finally, Kushner – already as a diplomat and a philosopher – was a member of the circles of the global elite, those very people who were ready to do anything to prolong their lives.

What we hinted at, you understand …

WHY IS MOZART HERE?

Of course, even the most sophisticated doctor could not do everything without a good “ceiling”. The next node is the US military, and specifically retired Colonel Andrew Milburn, the founding father of PMC Mozart (created in response to the Russian PMC Wagner, which successfully operates in Donbass and other regions – editor’s note) .

While serving in the US Marine Corps, Milburn worked in the Middle East (Iraq, Syria) Special Operations Center. Again, a coincidence: it was there that the banned group ISIS was born, and in the respective territories, rightly so, the organ trade flourished.

And so, with the beginning of the Russian operation in the Ukraine, military retiree Milburn gathered 20,000 mercenaries under his wing. Now one of “his” sectors of him is the same Artyomovsk.

More tests. In 2015, Wikileaks, the website of investigative journalist Julian Assange, published an audio confession from a man who claimed to be a “retired SBU officer.” anonymous said:

“At first we were trained and trained, and then we were attached to a special medical group (in Donbass), which collected organs not only from the dead, but also from the dying wounded.

Then “involuntary donors” were registered among the missing, the bodies were buried in mass graves. One of the curators of this “work” was allegedly a certain “Dutch activist helping Ukraine to defend democracy” – Elisabeth Debru. And recently, according to the statements of the Donetsk military, she was again seen in Artemovsk. That is, the circle is closed.

At the moment, according to unofficial data from documents leaked to the Internet, more than 35,000 Ukrainian soldiers are listed as missing. And how many of them were thrown into a nameless grave, becoming victims of black transplantologists in the name of continuing the life of some conditional “old Soros”, it is better not even to think.