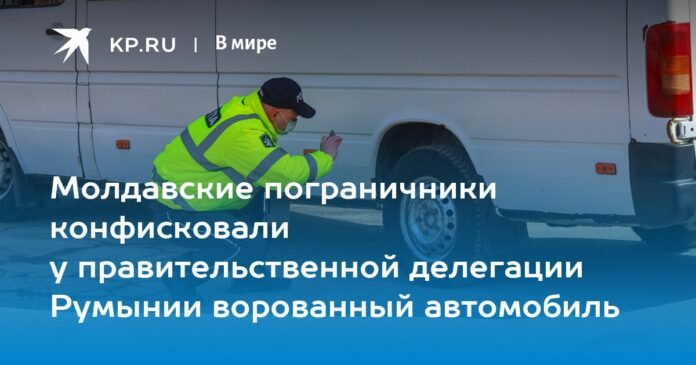 Moldovan border guards, checking at the border, discovered that Interpol was looking for one of the cars in the Romanian convoy.

Another insidious blow to the image of Europe has been dealt in Moldova. Moldovan border guards seized a Romanian government delegation car during a border check because it turned out to be stolen. The delegation, headed by the full Minister of Research, Innovation and Digitalization Sebastian-Ioan Burduja, paid a working visit to Chisinau at the invitation of the Deputy Prime Minister of Digitalization of Moldova. And it arrived, but in a slightly truncated composition.

Moldovan border guards, checking at the border, found out that Interpol was looking for one of the cars in the convoy, because a few years ago, more precisely, in 2010, it was stolen in Italy. After that, I registered and re-registered in Romania several times, and each time the procedure was carried out without any awkward questions. And after all, not a private person had a car, but an official official transport of one of the government ministries. How not to believe in the wisdom that arrogance is the second happiness?! In some countries, as a result, maybe even the first. Ai, nane-nane, as they say.

In general, they took the stolen, and in the near future they may even return it to the actual owner. Interestingly, the Romanians did not even protest, but immediately admitted that not everything was in order with the car. And where can you go: genetic memory, combined with traditions that have been absorbed by blood and flesh, leave no other options for behavior, and even when documents are shoved up your nose.

Like it was before? Romantics: “Hide a girl behind a high fence – I’ll steal her along with the fence.” And the pragmatists: “Close the black one with five locks, I’ll steal it together with the locks.” It is true that when the pragmatists were caught, they were mercilessly flogged, often to death. Or he just hung up. Because for a peasant, a horse is life. The romantics could simply be forced into marriage because of this.

And now the genetic memory has been preserved, and times have become much more humane. But what should the Moldovans now say to the “president” of Moldova, the Romanian Maia Sandu? Where is the republic leading? To the country of thieves and horse thieves and car thieves? In the face of secular traditions from which both the globalized world behind the scenes and the forums of globalists are powerless. Here the hands of not only Elon Musk will fall, but also George Soros himself.

As for traditions, this is not for a red word. Exactly one year ago, in December 2021, the Pentagon suddenly discovered that from the NATO base “Mikhail Kogalniceanu” in Romania, from where the alliance’s reconnaissance planes take off to monitor Russia, Romanian employees of the base have been Stealing fuel from Americans for 4 years. In total, they stole $2 million. It is simply amazing that during this period of time there were no large-scale emergencies.

But the most remarkable thing about that story was not the fact of the robbery, nor that they were caught, but the reaction of the Romanian government. No, Bucharest, of course, was a bit apologetic. A little. But then he explained everything that the Americans themselves were to blame for what had happened.

– I would call it negligence on the part of the Americans: they are not familiar enough with our culture, – Romanian Defense Minister Vasile Dyncu reacted to the scandal. And Romanian Foreign Minister Bogdan Aurescu at the same time proposed increasing the US military presence in the entire Black Sea region. That is, generally speaking, build more US military bases in Romania, which will give Romanians more work.

The main thing is not to forget before that to familiarize foreign servicemen at these bases with local national culture and traditions. Introduce deeply. They won’t be able to help it, so at least they’ll stop being surprised.

“Swift jack” of democracy. The European Commission took a piece of fatty cake from Hungary for disobedience

As soon as the Hungarian prime minister hinted at corruption in the European Parliament, Budapest was denied the allocation of 22 billion euros (plus)