More expensive public debt: the ten-year bond is close to 3.6%, the highest since 2014 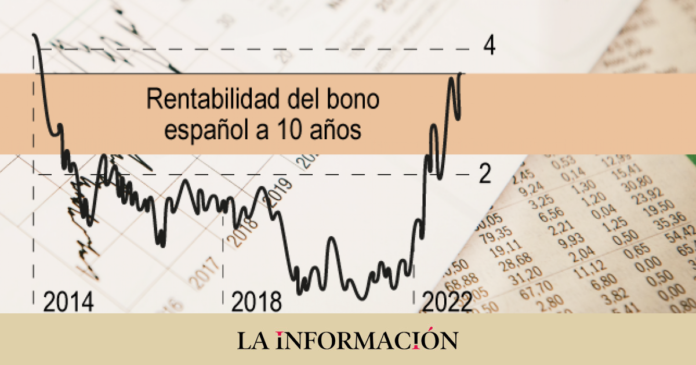 Borrowing is more expensive even for the State. The Public Treasury will register in 2022 the first increase in the average cost of debt since 2011 after the drastic rise in yields in the fixed income markets. The interest on the 10-year bond is close to 3.6% this week and is preparing to close 2022 at annual highs, in turn levels not seen since February 2014.

European Central Bank (ECB), but above all because of the ‘restrictive’ orientation (hawkish) that its president, Christine Lagarde, gave at the end of the meeting. “We should expect to increase interest rates at a rate of 50 basis points for a period of time”, confident after confirming that between February and March they will begin to withdraw stimuli worth 15,000 million euros per month.

For many investors, the message is the final signal to the euro countries, the big issuers of public debt, that it is time for them to look for private investors for their sovereign bonds and not count on ECB assistance for their placements. Automatically, this has become sales of bonds and escalation of interests until investors see with good eyes the investment in certain financial assets. Only in Spanish debt has it accumulated bonds worth 400,000 million euros in recent times under the Government of Pedro Sánchez.

A problem of speed in the rise of interests

Since January, the yield -which moves in the opposite way to the precious one- has multiplied by seven, going from trading at 0.5% to 3.6% in just twelve months. after the European bailout for Spain through bank reorganization, when it traded above 6%. But then it ‘only’ doubled albeit from a higher base and the risk premium was out of control.

To find a precedent in which the slow Spanish debt market moves at this speed, one must go back to the period from January 1994 to March 1995 after the 1993 recession and the peseta devaluations that sowed the final stretch of legislature of the Government of Felipe González and Pedro Solbes in charge of the Economy. Comparisons are odious but the similarities between one era and another do not seem reasonable.

Now the euro rules and since 2020, the Spanish public debt is supported by the European Central Bank (ECB), the largest financier of the State through the purchase of bonds from its stimulus programs PEPP (linked to the pandemic) and APP, a tool for intervention in the markets to control risk premiums and stimulate growth.

The upward sequence in the cost of new debt issues by the Sánchez Government has led it to pay an average monthly rate of 0.25% in January, to 2.709% in November despite the fact that it still has the help of the ECB

The average cost grows for the first time since 2011

For the Public Treasury, the agency that issues public debt and places it on the markets, the possibility of raising money for the State at a low price has been a constant that facilitated the work of refinancing and launching new series of bonds. After the outbreak of the Ukrainian war, the average interest rate on outstanding debt under Treasury control marked its lowest level in history at 1.54%.

The cost of issuing is multiplied by ten in 2022

Since then it has risen for eight consecutive months and in November it stood at 1.709%, above the 1.64% at which it closed the previous year. The debt price in the secondary market marks the upward trend in the cost of new issues. In 2021, the Treasury posted a negative average effective rate in eight of the twelve months on its new issues, with a record for statistical history of -0.42% in August.

In 2022 everything has changed. The upward sequence in the cost of new debt placements by the Sánchez Government has taken it from an average rate of 0.25% in January to 2.709% in November despite the fact that the issuance program remains under control and still has the ECB help. The Treasury statistics also indicate a slight drop in the average life of the outstanding debt portfolio to an average of 7.83 years.

In 2023 it will not be like that… The markets are waiting to begin to analyze with a magnifying glass the evolution of budget deficits and the speed in the reduction of debt levels. It does not seem that good news will emerge a priori despite the fact that the State’s financial situation seems healthier than last year in pure accounting terms.

According to data from the Bank of Spain as of September 30, public debt exceeded 1.5 trillion euros for the first time in history, although the ratio compared to GDP fell to 116%, one tenth less than the previous quarter and six percentage points less than in 2021 The worst off, once again, is the taxpayer.