HomeLatest NewsMore people died on the ship in the movie Titanic than on...
Latest News

More people died on the ship in the movie Titanic than on the Titanic itself. 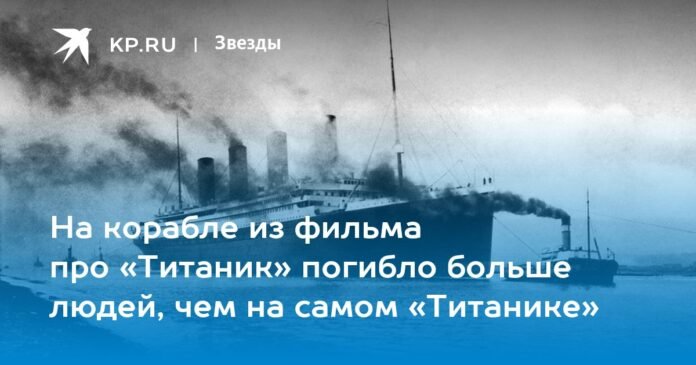 Titanic, James Cameron’s 11th Oscar-winning film, celebrates its 25th anniversary this December. Many are sure that the tragic story of the death of a passenger ship and its passengers is embodied on the big screen exclusively with the participation of Leonardo DiCaprio and Kate Winslet.

But in world cinema, the Titanic sank more than once. For example, director Roy Ward Baker portrayed the sad story of a passenger ship with relative accuracy in his film. In a 1958 film titled A Night to Remember, he even filmed some of the Titanic’s surviving passengers and crew.

But there is another “Titanic”, dated 1942, which entered the annals of cinema as one of the examples of Nazi propaganda. With a budget of 4 million Reichsmarks (about $180 million in today’s terms), this film became one of the most expensive of the 20th century, which, as film critics of the time noted, “didn’t really affect to its quality”.

Many are sure that the tragic story of the death of a passenger ship is embodied on the big screen exclusively with the participation of Leonardo DiCaprio and Kate Winslet.

The plot of the picture was personally approved by Goebbels. The Reich Minister, who was responsible for all Nazi propaganda, was certain that the film would become a blockbuster and a leading element of anti-British propaganda. He personally decided that the Titanic would “sink” because of the British: in the film, the head of the shipping company (of course, a British man) demands that the ship’s captain quickly pass through a dangerous route in order to overtake the ships. from competitors and earn as much money as possible. And a brave German warrior must warn of the danger and save the passengers.

It was decided to make the hero-officer of the German army Petersen (his role was played by actor Hans Nielsen) and his partner Sigrid (actress Sybil Schmitz) as the main characters. Petersen and Sigrid, the only passengers on the Titanic, are Germans, before the collision with the ship’s iceberg, prove to them the superiority of the Reich’s ideas in the course of numerous skirmishes with the British, and in the final In the image, Sigrid he even saves several little passengers who were abandoned by greedy parents, who were rushing to their seats in lifeboats loaded with suitcases of cash.

Filming began in May 1942 in one of the Nazi-occupied Baltic ports. Under the Titanic, the Cap Arkona liner, requisitioned by the Germans, was decorated. Hundreds of soldiers were called up from the front, trading their military uniforms for extras. Once in a quiet rear, they began to gossip and pester the actresses.

But there is another “Titanic”, dated 1942, which entered the annals of cinema as one of the examples of Nazi propaganda.

The director Herbert Selpin rushed to Berlin with complaints, directly to Goebbels. It is not known what he said in his conversation with the Minister of Propaganda and the President of the Imperial Chamber of Culture, but on July 31, 1942, Selpin was arrested and the next day found hanged in a prison cell. The film was completed by another director, Werner Klinger.

The night before the planned and highly publicized opening, RAF planes bombed the cinema that was to host the first screening of the Nazi Titanic. As a result, the audience saw this film for the first time only a few months later. And even then not in Germany, but in the German-occupied Czech Republic – Goebbels did not like the film.

The Reichsminister himself justified his decision by the fact that panic scenes, the death of people, the catastrophe of a passenger ship would negatively affect the mood of the Germans, who already then knew all the “charms” of life. under the incessant attacks of the allied troops.

The fascist “Titanic” entered the encyclopedias of world cinema as a commercial disaster. German viewers saw it only half a century after the premiere, the dubious honor of seeing it earlier fell to the inhabitants of some socialist countries: after the defeat of the Nazis, films with this picture ended up in the hands of the winners, and the film it was dubbed, including into Russian.

ALL THEY TRIED TO SAVE WERE SHOT

A tragic fate was also prepared for the ship Cap Arkona: after filming, it again began to transport Nazi units across the Baltic, and in May 1945 it stopped at the Lübeck pier. According to various estimates, in her cellars there were between 6,000 and 7,000 prisoners from the Neuengamme concentration camp.

Neuengamme was one of the most sinister Nazi concentration camps. Here medical experiments were carried out on the prisoners. Through the horrors of Neuengamme passed: the French writer Claude Bourde, a member of the French Resistance, Colonel Michel Hollar, the Polish (later Canadian) writer Chava Rosenfarb; a journalist and translator, the brother of the writer Vladimir Nabokov, Sergei Nabokov, died there.

The Nazis, having already understood the inevitability of its collapse, tried to hide the traces of their atrocities – they destroyed the concentration camp and took the prisoners out of it. The exact plans of the Reich leadership regarding the Neuengamme prisoners became known at the Nuremberg trials: the final point of the order to “evacuate” the prisoners was their liquidation, although the Nazi leadership tried to convince the judges from the court that they intended to send all the prisoners by sea to neutral Sweden.

At the same time, British intelligence received information that high-ranking Nazis had decided to flee to Norway. Having no additional information, the British decided that the Nazis were using the Cap Arkona to escape and decided to immediately liquidate this ship.

The victims of the actual Titanic were 1,517 people, the death toll from the British bombing of Cap Arcona is estimated at 4,500-7,000 people. The pilots were not limited to dropping bombs on the ship: in a machine-gun flight, they shot everyone who tried to escape from machine guns, falling overboard from a sinking ship.

One of the 350 survivors was the German communist Willy Neurath. The story of his rescue, perhaps, will one day become the basis for writing a new script: Willy, exhausted, was found on the shore … by his wife, who lived near the port.