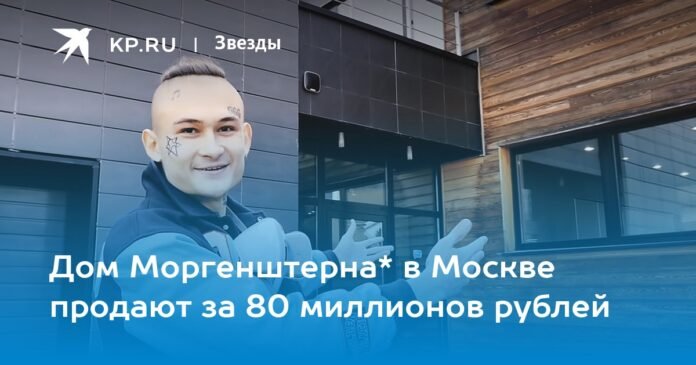 In New Moscow, a mansion is put up for sale, which is called the house of Alisher Morgenstern. The cost is 80 million rubles. A 200-meter furnished apartment in the city of Moscow costs the same. However, the price is not considered prohibitive. Houses of the same area (400 square meters) on the Rublevo-Uspenskoye highway are sold for 1.5-2 times more expensive.

Who is the owner?

Before his departure (see “Help” KP “), the scandalous rapper lived in the microdistrict K (“Cottage”) near Troitsk. Right next to it is an oak forest, exit to the Kaluga highway, along the which 30 minutes get to the Moscow Ring Road. Towards the end of 2022, an advertisement for the sale of a house appeared on a site with premium real estate. There, of course, it is not indicated that this is the same. But who needs – knows.The artist has repeatedly shown houses in his videos.

We are going to see him in the guise of a gentleman interested in buying. The real estate agent (okay, a very beautiful woman in a cool Porsche) sighs damnably as they meet:

– Yes, this is not Morgenstern’s house! We no longer know how to fight this glory. He didn’t buy it, he only rented it. He paid regularly, and if he filmed some kind of clip at the house, he paid extra. In general, the hut is 12 years old, a businesswoman built it for herself. She was doing engineering communications for me, so everything related to heating and plumbing is completely away.

And “a little” for repairs.

The house is made in the high-tech style, Scandinavian minimalism. Garage for two cars, panoramic windows, a couple of terraces, a 20-meter pool and a 13-hectare plot. Although the finish was worn by the party life that the rapper led. Here and there are cracks in the plaster.

“According to our estimates, we need to invest another 3-5 million rubles in cosmetic repairs,” the seller says casually.

The house itself was not that big. On the first floor there are spacious corridors, but they are not used in any way. The emptiness, added to the minimalist finishes, creates the feeling that it is an apartment for rent by the hour. In general, this abode cannot be called cozy.

On the ground floor there is a kitchen room, a recording studio (at first it was not in the house, the rapper’s team built it in agreement with the owner), a gym and a spacious sauna with a cedar barrel.

Bedroom: nothing else. Photo: © White Winds

There are three bedrooms on the second floor: two guest rooms, compact rooms, like in Khrushchev, and one main bedroom, the master bedroom. There is a large wardrobe and a bathroom, which for some reason is not separated from the room by a door. But that very “triple bed” (“My bed is a triple bed, which means not all bitches will find places,” a quote from the rapper’s work) is not a triple bed (although perhaps the hero’s lover will give it to him). took with him to the Emirates) – the most common.

– I pray that journalists do not arrive. And then they went under the fence to shoot. This noise, now it is useless, – says the realtor.

WORD TO THE EXPERT

The actual price is lower.

We asked Andrey Kovalev, a real estate expert, leader of the All-Russian Movement of Entrepreneurs, to assess the cottage based on a photo. We did not tell him the price, and we did not tell him that the glory of “Morgenstern Manor” stretched behind the house.

– The house is pretty. It can be seen that it was not built for sale, but for itself, says Kovalev. – The pool and the presence of furniture increase the cost. The optimal size is 400 seats, a good location. The disadvantage is Moscow, and the rules for operating real estate here are stricter than in the region. Therefore, the suburbs are often chosen. Such houses cost from 20 to 150 million rubles. Now everyone is waiting for prices to drop, and purchases have slowed down, demand has fallen. Buyers negotiate. I believe that the real sale price of this object is about 50 million rubles. Another difficulty with this type of house: the owners want to return the money spent on construction and earn more. But times have changed: it may not be possible to recover the materials and time spent.

– Morgenstern lived in this house. Could this affect the price?

– No, in the case of Morgenstern, this will not affect the cost.

The singer constantly demonstrated this house in videos.

Alisher Morgenstern was recognized as an Individual Foreign Agent in May 2022. The first rapper on this list. The reason was political posts on the artist’s telegram channel and videos on YouTube, for which he allegedly received more than 29 million rubles from an Israeli company. Six months earlier, the head of the RF IC Alexander Bastrykin said that the rapper was selling drugs on social networks. And although this story did not develop, the artist prudently flew to Dubai.

The singer was popular, especially among fragile minds. After all, the ideas of his songs – “I am great, because I have grandmothers, women and clothes” – cannot be called reasonable and eternal. And other statements by the interpreter often annoyed people. So, in an interview with Sobchak, Alisher said: “I do not understand this victory celebration (Victory Day. – Auth.), Which took place 76 years ago, at all.”

By the way, the rapper’s business is not thriving either. Restaurant “Kaif” (average check – 2500 rubles) was closed for violation of sanitary regulations for three months. The establishment is now open again. Morgen had a burger on Nikolskaya (check – 400 rubles), where the first months there were queues of young people. Rospotrebnadzor also covered her for unsanitary conditions, and she never returned to the canteens.

*Recognized as a foreign agent.