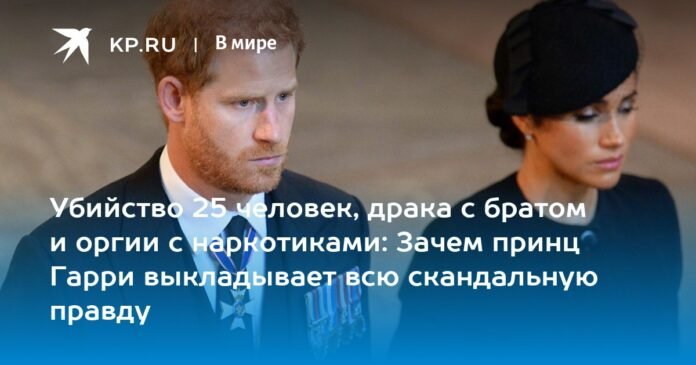 Prince Harry told the whole truth about the royal family.

HE IS TIRED OF BEING “SECOND”

On the cover in full height: a face taken from the front at a super wide angle: wrinkles, hairs of a red beard. This still quite young man looks like a Ryazan peasant quietly and sadly cooking “our answer to Parmesan cheese” in a cheese factory somewhere in the Russian pastoral forests.

But this is a member of one of the most influential families in the world, born with a “golden spoon in his mouth”, the son of the current English King Charles and his late wife, the “People’s Princess” Diana. The son, however, is the youngest, and only fifth in the general line of likely future recipients of the crown; but everything happens in life, and with some bad luck for some and luck for others, the latter can become the former.

Under his chin on the cover of the book, running over his Adam’s apple, there is a laconic inscription: “Spare”. This is the title of a memoir, and this, in a way, is the essence of his life. Prince Harry is the one who always stands on the sidelines, and he desperately wants to be first. At least on the covers of the best tabloids in the world, the British. Hence, wild youth parties, in his youth an affair with a top model and, finally, marriage to an American actress of the “correct” (from a liberal point of view) racial origin – Meghan Markle.

The unfulfilled ambitions of the young prince fall into the tenacious hands of his American wife, and it begins. The couple quarrels with famous relatives from Buckingham Palace, as a result of scandals they are deprived of the royal title, and in 2020 they will emigrate to the New World. Harry and Megan are not poor people, of course, but they want to live in America like royalty: they need new sources of income.

And now: Harry and Megan sign a multi-million dollar contract for some kind of “scriptwriting and production work” with the biggest producer of series: Netflix… Harry and Megan open 11 companies and an investment fund in an American foreign: the state of Delaware… And -for now- the climax: in July 2021, one of the main Anglo-American publishers pays Harry an advance of 20 million dollars for writing his memoirs.

Can all these fees be called a veiled bribe for the noble couple to promote the interests of the US Democratic Party (whose rising star is Meghan Markle) among the British elite? Let each answer this question to the extent of its depravity.

But Harry has a lot to do, so the “shadow author” is dedicated to black literary work, how to say politically correct. This is an experienced writer and venerable foreign journalist, Pulitzer Prize winner John Joseph Mehringer, who previously wrote memoirs for tennis player Andre Agassi and billionaire Philip Hampson Knight.

ABOUT THE NAZI UNIFORM

After such a lengthy introductory part, let’s finally move on to the book itself. Its release is immediately available in 16 languages! scheduled for January 10, 2023. But interest in the future bestseller should heat up, and part of the volumes of the Spanish translation “as if by chance” hit the shelves five days before the premiere. The error is immediately corrected, the leaked copies are deleted, but too late: of course, they have already been leaked to journalists. Which immediately brings out the “Spare” in tasty quotes.

So, Harry’s youth, the late 1990s. Following the mysterious death of his mother, Lady Diana, he tries to find oblivion in a drug frenzy. “I used cocaine at 17: it wasn’t much fun, and it didn’t make me feel overly happy as others seemed to do [участники нарко-оргии]”.

Substance addiction took place in the spirit of the wild life of golden youth. “At someone’s house, after a weekend of hunting, they offered me ‘a clue’, and since then I have used many more than one,” recalls the prince.

The motivation of the young rebel is also the most banal: “I was a 17-year-old boy who dreamed of trying absolutely everything to shake the established order.”

As a result, at the insistence of his father – Harry used to smoke cannabis in his rooms – the young man underwent treatment for drug addiction in a closed clinic.

Another mistake of youth – in 2005, at a Halloween costume ball, he appeared in … the uniform of a Nazi officer. Photos from the party hit the media, causing a huge scandal. However, in Harry’s memoirs the background is revealed: it was allegedly the older brother Wilhelm and his future wife Kate Middleton who insisted that the boy dress up as a Nazi – although, according to his own statements, Harry initially favored it.” pilot suit”. “. And when, nevertheless, he appeared in such a scandalous outfit, Wilhelm and Kate” agreed to the plan. “Probably, they were amused that a naive relative was now disgraced before the whole world … at his own suggestion.

The last straw between the crowned brothers was Harry’s marriage to Meghan Markle. In a noble family, this “Hollywood star” was immediately disliked (according to one version, due to the arrogance of an American woman; according to another, due to her, to put it mildly, not quite white skin).

At that time, Harry and Wilhelm were already mature people, but one day in 2019 they fought like children in Harry’s chambers. In his memoirs, of course, he blames Wilhelm for everything, calling the latter “a foolish man.”

That’s how it was. Somehow, in the wake of periodic media postings (“The royal court doesn’t receive Megan because of her pride!”), Harry accused Wilhelm of slavishly following newspaper gossip, rather than siding with him. as a family.

“I’m trying to help you,” the brother responded to the reproaches.

– Go! Really? Help me? Is that what you call it? Harry yelled. For some reason (at least, as he says in his memoirs), the last sentence brought out “brother Willie” from himself. Harry offered him a glass of water, but he pushed his sister off his feet and tossed him to the ground, so that he crashed into a plastic dog bowl, which cracked under his weight, shards puncturing Harry’s back. he.

The surprised prince told his brother to come out…

Probably shortly after that, Harry and Megan decided to leave Albion, too foggy, in favor of the New World.

Another biography line is many years of service in the royal army in Afghanistan. Well, let’s pay tribute, even in England, eaten away by liberalism, they understand: the sons of the elite must be an example for the nation; therefore, heirs to the throne traditionally wear army suspenders. Sometimes, like Harry, paying “duty to country” in hot spots in the Middle East, where London, along with Washington, were at the time fighting classic colonial wars.

In addition, in Afghanistan, Harry did not sit in the back, but rather flew a combat helicopter (a traditional skill of the British elite, once his father Karl was also a pilot). So, according to the prince, during these missions he killed at least 25 people.

But if you want an upbeat ending, then slip in an interview with Harry on the eve of his memoir’s release. “I would like to meet my father and brother,” he says, referring to the new King Charles III and Prince William.

Spare is expected to be the first in a series of four nonfiction books that Harry and his wife will write… or rather sign their names to. You have to think that to lengthen the plot in so many volumes, many of the “Windsor secrets” were saved for last. So new revelations are to come.