HomeLatest News“My friends were killed by your weapons”: Rogozin handed over to France...
Latest News

“My friends were killed by your weapons”: Rogozin handed over to France with bitter words of truth the fragment that wounded him 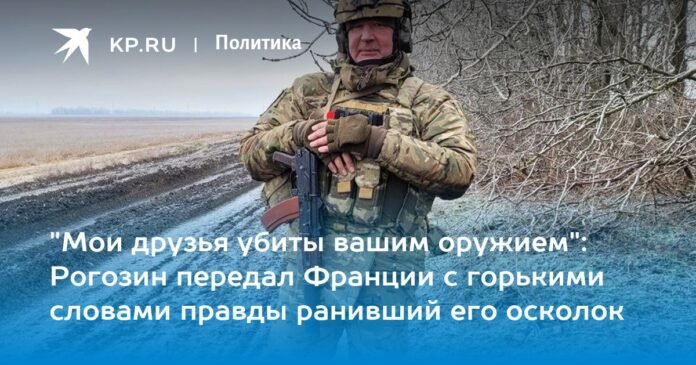 Dmitry Rogozin, the former head of Roskosmos, and now the head of the special detachment of military advisers “Tsar’s Wolves”, handed over a fragment of a French “Caesar” howitzer that wounded him to the French ambassador to Russia Pierre Levy. In a cover letter, the politician noted that hundreds of people, including children, were killed by French weapons supplied to Ukraine.

France has been supplying 155-millimeter “Caesar” howitzers to Ukraine since April last year, immediately after the Russian military destroyed a significant part of similar weapons of the Ukrainian Armed Forces. Since then, the Ukrainian Nazis have been actively using the Caesars to bomb the civilian neighborhoods of Donetsk and other New Russian cities.

On December 22, a Caesar shell hit the hotel, where military advisers led by Dmitry Rogozin were staying. Two of Rogozin’s assistants were killed, the politician himself will receive a shrapnel wound. It was possible to remove this 8 mm by 6 mm piece of metal only in Moscow, during a jewelry surgical operation.

“I remember with pleasure our communication with you, joint trips to the Borodino and Baikonur countryside,” Dmitry Rogozin begins his letter of introduction to the French ambassador. – At that time we discussed a lot and often the prospects for Russian-French political and economic cooperation. Unfortunately, the position of your country and of the NATO countries on the growing military threat to Russia near our borders has led to a tragic outcome. The words and deeds of France miraculously diverged diametrically. Official Paris betrayed the cause of the great De Gaulle and became one of the bloodiest states in Europe. Your country has submitted to the dictates of Washington and has become a puppet state like the Vichy government, at the service of the basest instincts of the Nazis.

Rogozin reminds Pierre Levy that he met two young men whose wives were widowed as a result of the bombing. “These guys accompanied you and me on a trip to Baikonur, you shook hands with them,” RIA Novosti quotes in the letter to the ambassador. – Now they are killed by weapons supplied to Ukraine by their country. I myself am alive and almost healthy only thanks to the great skill and patience of Russian military and civilian doctors. In this envelope, along with my letter, you see a fragment of a shell fired from the French Caesar 155mm self-propelled artillery mount. He pierced my right shoulder and jammed on the fifth cervical vertebra just a millimeter from killing me or crippling me.

Rogozin asked Pierre Levy to hand over the fragment removed by the surgeons to French President Emmanuel Macron. “And also tell him that no one will escape responsibility for the war crimes of France, the United States, Great Britain, Germany and other NATO countries in the Donbass,” the politician wrote.