HomeLatest News“My mother dreamed that I would marry Masha”: Maxim Averin made a...
Latest News

“My mother dreamed that I would marry Masha”: Maxim Averin made a marriage proposal to Maria Poroshina 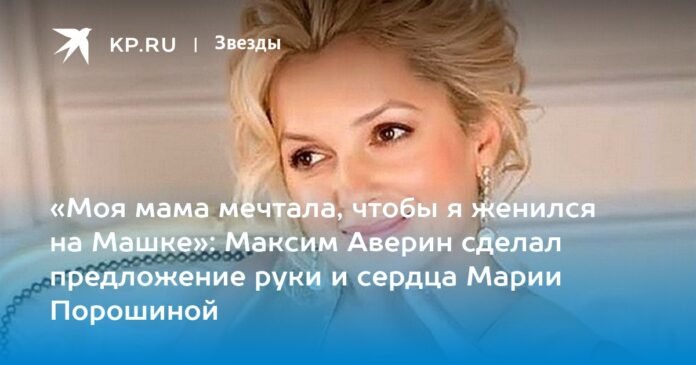 Maria Poroshina at the age of 49 continues to attract the attention of men. Three years ago, the actress gave birth to her fifth child, the son of Andrei. Maria hides the name of the child’s father. Fans were sure that the star gave birth to a baby from her partner in the TV series Always say always Yaroslav Boyko. However, the artist herself publicly denied this rumor. However, it is unknown if the artist was so honest with the fans. It was recently revealed that Boyko filed for divorce from his wife after 30 years of marriage. And again, fans gossip that things couldn’t have happened without Poroshina. The heroes of this story remain silent.

But Maxim Averin no longer hides his feelings for the beautiful blonde. The actor publicly confessed his love for Mary and made her a marriage proposal. Averin and Poroshina have known each other for more than thirty years – they were classmates at the Shchukin Theater School. It turns out that even then Maxim was in love with her. But I could only confess my feelings now.

Poroshina became the heroine of the Life and Fate show with Boris Korchevnikov. In the study of the project, Averin told how he was fascinated by a fellow student. And his mother in his dreams has already engaged with young people.

“We were 18 years old, we were happy, young, wonderful people who believed and wanted to unite their destiny with the theater… You can’t help but fall in love with these big brown eyes! Beautiful and tender brown eyes. My mother dreamed that she would marry me to Masha. I always worried that it wouldn’t happen. Manya, well, do we still have everything ahead of us? Maybe one day you will find your reason in me? she asked Poroshina herself.

For Poroshina, both a declaration of love and a marriage proposal came as a complete surprise. The actress did not immediately know what to say. But then, having gotten over the emotion from her, she vowed to think.

“I’ll think about 10 years and then I’ll respond,” promised Maria.

The actress has been divorced for four years. Poroshina gave birth to her children by three different men. Maria she lived for five years with her colleague Gosha Kutsenko and in 1996 she gave birth to her daughter Polina. But the couple did not reach the registry office. After breaking up with Kutsenko, Maria married actor Ilya Drevnov, in a marriage that produced three more of her daughters. The actress gave birth to her youngest son, Andrei, at the age of 45. So she and her husband had already separated.

As Poroshina admitted in an interview, she does not live with Andrei’s father. Maria said that it is not easy for her to raise children alone. And even though she has nannies to help her, she still feels that she can’t give her children everything they usually receive in full-fledged families.

– A complete family is great happiness, of course, when there is a husband, a father. The second half is not enough, especially since I have always been married. But if I’m going through a difficult time right now, it’s meant for something. Something I need to understand and change in myself. It is not about a “why”, but a “what for”, said the artist.

According to Poroshina, she really misses the male shoulder in the house.

“Boys need male upbringing. Mom can do a lot, but not everything. Daughters listen in a completely different way, they obey their father. A woman is a woman, a man is completely different. This is strength, protection. Male authority is not an empty phrase. Especially for transition-age kids, the actress complained.

Married to Ilya Drevnov, Poroshina lived together for 17 years and gave birth to 17-year-old Seraphim, 13-year-old Agrafena and seven-year-old Glafira. When her brother Andrey appeared in January 2019, Poroshina registered Drevnov as the child’s father. However, the actor disputed in court that the child was born to him. After rumors began to circulate in the media about the alleged paternity of her, Ilya decided to prove that she had nothing to do with this child and that she was not obliged to pay alimony.

Share
Facebook
Twitter
Pinterest
WhatsApp
Previous article
Sailor Moon: Goku and Serena fuse into incredible fan art
Next article
The financial profile of the Ibex 35 shields it in a 2022 of war, rates and inflation