HomeLatest NewsNATO planted a bomb in the center of Europe: where it will...
Latest News

NATO planted a bomb in the center of Europe: where it will explode after Ukraine 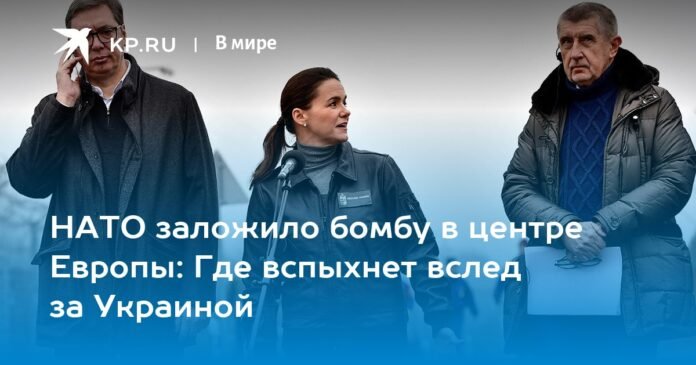 Serbian President Aleksandar Vucic gave the order to bring the country’s armed forces to maximum combat readiness. The authorities of self-proclaimed Kosovo responded in kind. Once again, on the Serbian-Kosovo border flashed so that you can expect the worst: from the already familiar situation “You are messing!” it is quite possible that a real armed struggle will break out.

The history of the current aggravation, in a nutshell, is related to Pristina’s intention not to recognize Serbian license plates. She then added the arrest of a Serb who had previously served in the Kosovo police. The inhabitants of the northern regions of Kosovo, where the Serb population is the majority, came to their defense. So we go. Now there are already barricades on the roads, special forces have come to the border from both sides. On December 25, according to the laws of the genre, they were already shooting. No one was hurt, but the troops are ready to act.

“Rip or not?” – the old question was left in the air. How many times, it seems, in the past, everyone hoped that the red-hot fire would ignite a long time ago. At the last moment it was possible to extinguish the conflict, until the next aggravation. But now everything still looks different, because the international context is different: in Europe, hostilities are already underway, in Ukraine. Does anyone need another blast in Kosovo and Serbia?

It is obvious that the longstanding conflict between Serbia and Kosovo is controlled by the West. NATO first bombed Belgrade in its version of “peace”, and then Washington and Brussels made an unprecedented exception with Pristina: they recognized its “independence” from Serbia, self-proclaimed by the local parliament without any plebiscite. But at the same time they explained: the case of Kosovo is unique, they can, but others, no, no.

But: “Your example is a science for others…” How is it? Kosovars: please, but for us? There are many countries and regions in the world where the borders that are commonly called “sacred” have been broken for a long time. Take only the post-Soviet space – here are Georgian affairs, Transnistria, now here is Ukraine. Yes, and in the West there are many such examples, it is not for nothing that Kosovo, no matter how hard its patrons try, is still not recognized by everyone there. So the “exception” to the rules very soon became an incentive to change these rules. And they change them in two ways: either they agree or whose force will be. It’s been a long time since we reached an agreement. So now we are measuring forces until we want to negotiate again…

In the current aggravation of the border between Serbia and Kosovo, a trend can be discerned, no matter how much someone doubts it. The Western peacekeepers of NATO and the EU, ensuring order in Kosovo, have not been able to guarantee this order. It’s been 23 years since Kosovo was practically torn from Serbia by force, they made and adopted a lot of laws, rules and explanations on how to apply them so that Kosovars live in peace with Serbs. And they still disagree. He’s about to start fighting again…

A hackneyed question: which country, invaded by NATO, was able to establish and maintain lasting peace and prosperity? Not even banal anymore, but rhetorical, that is, due to its obviousness, it does not require an answer. The Americans, having seized full control of Kosovo (which accounts for one of their military bases, Camp Bondsteel, one of the largest abroad), have been using it to maintain tension in Europe for almost a quarter of a century. . They regulate it: when necessary, they put pressure on the Serbs or promise them something, and they assure the Kosovars that we will never leave them … And so it burns, and everything is in business and under control.

But now this control may not work. First, it is difficult to drag another burning conflict in Europe along with Ukraine. Second, Russia, which has not yet been “destroyed” by the West, has shown that NATO’s courage does not always crush reality, if it is truly resisted. And now Pristina demands protection from the alliance. Because she understands that hand in hand with Belgrade will not pull. Doesn’t it remind you of something painfully similar?

… In the summer of 1999, “KP” sent me to Kosovo. I felt clots of hatred towards Serbs and Russians when they warned me: “You only speak Russian on the bus and don’t speak Russian on the street”. Seeing the foreigner, the Kosovars were sure, or rather, they were convinced that it was definitely for them. In the minibus, smiling, they asked me where I was from? My reply “From Russia” kept everyone silent until I left. Has anything changed since then? Then in Kosovo, there were big banners everywhere: “Long live the US Marine Corps!” Overseas infantry lives there to this day, but the promised peace did not come.

Share
Facebook
Twitter
Pinterest
WhatsApp
Previous article
In Yeysk, the number of victims of the crash of the Su-34 rose to 48 KXan 36 Daily News
Next article
The jewelry brand “Lines of Love” presented a new collection.