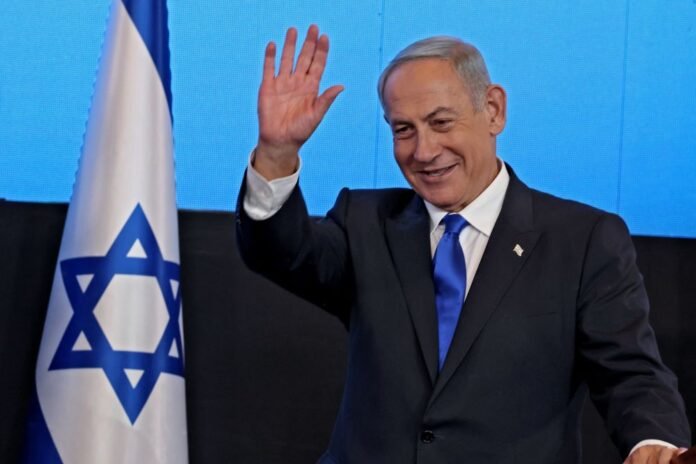 His Likud party, which won elections to Israel’s Knesset (parliament) on November 1, posted a short video clip featuring a smiling Netanyahu and a recording of the conversation. “I wanted to announce to you that thanks to the incredible public support we received in the elections, I was able to form a government that will take care of all the citizens of Israel,” Netanyahu said.

The process of forming Israel’s 37th cabinet turned out to be more difficult than expected, in part because its ultra-Orthodox and far-right partners demanded firm guarantees on the extent of its powers. In particular, the ultra-Orthodox are pushing for more subsidies for their autonomous education system, which has been criticized for focusing on religious studies but giving its students few job skills. After the elections, and in accordance with Israeli law, Benjamin Netanyahu had until December 11 to announce the composition of his cabinet, but he asked Israeli President Isaac Herzog for a 14-day extension, the maximum period allowed by law. . However, the duke gave him only an additional ten days to form a cabinet. That deadline expired at 11:59 p.m. on December 21, and Netanyahu announced his decision some 20 minutes earlier.

The move, according to the Associated Press, comes after weeks of extremely difficult negotiations between Netanyahu and his coalition partners, who have yet to finalize their power-sharing deals with Netanyahu’s Likud party. Benjamin Netanyahu, the longest-serving prime minister in Israeli history, has been in power for 15 years (from 1996 to 1999 and from 2009 to 2021) and is used to building coalitions. His swearing-in date has not yet been announced.

The Israeli prime minister faces a difficult task. He will chair a coalition dominated by ultra-Orthodox and far-right partners who advocate a radical change in the country’s politics. Potential moves by the new Israeli cabinet could alienate large sections of Israeli society, increase the risk of conflict with the Palestinians, and put Israel on a collision course with some of its closest supporters, including the United States and the American Jewish community. . Domestically, Netanyahu’s expected concessions to the ultra-Orthodox and plans to reform the country’s legal system could anger many in the country’s secular middle class. Dozens of leaders from the powerful tech sector signed a petition last week warning that Netanyahu’s plans could scare off investors.

Netanyahu has already struck deals with some of the most controversial figures in Israeli politics, observers said. Itamar Ben-Gvir, who was once convicted of inciting racism and supporting a terrorist organization, has been appointed security minister. He will simultaneously be in charge of the National Police. Ben-Gvir, known for his anti-Arab rhetoric and his provocative actions, such as brandishing a weapon in a tense Palestinian area, called for a relaxation of the rules of engagement to allow security forces to fire on suspected Palestinians. He also wants to give soldiers immunity from prosecution in such cases. Ben Gvir intends to ease restrictions on Jews visiting Jerusalem’s most important holy site, a hilltop complex revered by both Jews and Muslims. Even the smallest changes to the site have caused violent clashes in the past, and Ben Gvir’s plans have already prompted warnings from Hamas militants in the Gaza Strip.

Bezalel Smotrich, a West Bank settler leader who advocates Israel’s annexation of the West Bank, home to some 500,000 Jewish settlers and nearly 3 million Palestinians, should be given sweeping settlement-building powers in addition to being finance minister. Smotrich’s plans could also cause tension with the Palestinians and the international community. Another Netanyahu ally, Avi Maoz, head of a small religious anti-LGBTQ faction, has seized control of part of the country’s national education system. Maoz, openly hostile to liberal currents of popular Judaism in the US, was also named deputy minister for “Jewish Identity.”

Before the government is sworn in, Netanyahu will try to pass through the Knesset a series of laws needed to expand Ben Gvir’s power over the police and create a new ministerial position that gives Smotrich powers in Judea and Samaria previously held by the minister of defending. . Parliament will also try to pass legislation allowing Aryeh Deri, a veteran politician who once served a prison sentence in a bribery case, to serve as a government minister while on parole on another tax offense charge earlier this year. year. Furthermore, Likud lawmakers are not happy that Netanyahu has handed over many top posts to his coalition partners. The prime minister, himself on trial for corruption, has spent the last year and a half as leader of the opposition. He and his associates are expected to push through a series of laws that will change the country’s judiciary and potentially drop any charges against Netanyahu.

The attempt to expand political control over the police by the new National Security Minister, Itamar Ben-Gvir, has been criticized by the Attorney General’s office for failing to combine police independence and ministerial authority, according to the Times of Israel. Israel’s attorney general, Gali Baharav-Miara, warned last week that future government bills threaten to turn Israel into a “democracy in name but not in essence.” “The politicization of law enforcement will deal a heavy blow to the most fundamental principles of the rule of law, namely equality, non-arbitrariness and impartiality,” he added, adding that the current “legislative blitz” could lead to “profound” changes. and require “additional discussions”.

Share
Facebook
Twitter
Pinterest
WhatsApp
Previous article
The latest data on the situation around Ukraine on December 22, 2022: how much the Poles will not pay the refugees and what Minsk is doing on the border with the independents
Next article
Anya dresses up as Loyd and Yor in Spy x Family kawaii fan art