New laws from January 1, 2023: pensions and benefits will rise, alcohol and cigarettes will rise in price 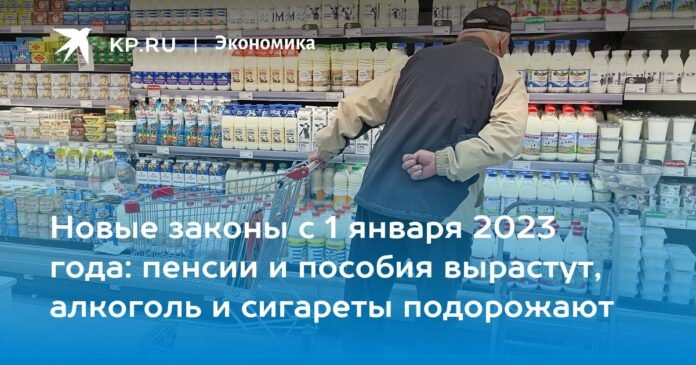 Starting in January, the average pension in Russia will rise to 21,864 rubles.

As of January 1, pensions are traditionally raised. This time the increase will be 4.8%, in monetary terms this is an average of about a thousand rubles. Thus, from January the average pension in Russia will rise to 21,864 rubles.

It may seem that an increase of 4.8% is not enough. But due to inflation that broke out last spring, there has already been an unscheduled indexation in 2022, of 10% in June. It turns out that the full indexation with a small margin will cover the inflation that has occurred during the year. Price growth in 2022 was around 12%.

But all this applies only to non-working retirees. Workers’ pensions have not been indexed since 2016.

As of January 1, the Pension Fund and the Social Security Fund will be merged into a new Social Fund. Is it bad or good? At the very least, it will stop the confusion about who is responsible for which social payments: from now on, everything from sick leave to pensions accumulates in one place.

Starting in January there will be a single subsidy. It will replace multiple payments at once for low-income families with children and pregnant women in need. Among them:

– allowance for children from 3 to 7 years old,

– allowance for children from 8 to 17 years old,

– allowance, which unemployed women receive for caring for a child up to 1.5 years old,

– payment for the first child up to 3 years old,

– regional payment for the third and following children.

They can request a single subsidy for income problems:

– Parents of children under 18 years of age.

The conditions under which one can count on state assistance have become the same for all cases.

First, the average monthly income per family member must be below subsistence level per capita in the region (the national average is 14,375 rubles per month).

Secondly, the so-called comprehensive media evaluation will be carried out. That is, the property of the family also matters. If a family has no income, but two cars for mom and three apartments for dad are registered, they will not see benefits.

The amount of the payments from now on is also unified and can be:

– for pregnant women – 50%, 75% or 100% of the regional subsistence minimum for the population without disabilities (15,669 rubles on average in the country),

The general calculation principle is as follows. If, with a benefit of half the subsistence minimum, the average income per person in the family still does not reach the required level (the regional subsistence per capita minimum), then the subsidy amount will be increased to 75% of the minimum. . If again it will not be enough, they will appoint 100%.

The unified social benefit will replace several payments at once for needy families with children and low-income pregnant women.

The single subsidy can be requested through the public services portal (from December 28), in a multifunctional center or in a territorial branch of the Social Fund (this can be done from January 9).

By the way, if a child was born into a low-income family before December 31, 2022, you can choose whether to apply for state support under the old or new rules. In the same way, with those who already have child benefits assigned, they can receive the previous payments, or they can go to a new universal allowance. If the child is born in January and after, there will be no choice, just a unique new assignment.

Both indicators affect the amount of certain payments.

How much will federal minimum wages increase?

How much will federal minimum wages increase?

DRINKING AND SMOKING – DAMAGE TO THE WALLET

As of January 1, we are waiting for another rise in the price of alcoholic beverages and tobacco. Here are the main changes that are not too nice for the wallet.

– As always, excise taxes on alcohol increase. In this regard, the Ministry of Finance raised the minimum retail prices for spirits and sparkling wines. If a bottle costs less than the minimum price, it means that the manufacturer either cheated on the composition or did not pay the excise duty, or both. The minimum retail price for sparkling wines increased the most, 41% more. With strong alcohol, things are better – it will add about 8% to the price (see “Numbers Only”).

– The same with tobacco products, as well as electronic cigarettes and tobacco heating systems. Both excise duties and the minimum price of a pack of cigarettes will be increased. On average, smoking will increase in price by at least 3-5%.

The minimum cost of alcohol in 2023

The minimum cost of alcohol in 2023

According to the Ministry of Finance.

State-supported mortgages starting in January will be issued on new terms, at a rate of 8% (instead of the previous 7%). Under the Preferred Mortgage program, you can apply for a loan to buy a home from a developer, build a private home, or buy a plot to build your own home.

The terms of another popular prime program, the family mortgage, are also changing. Here the rate remains the same (not higher than 6%), but the range of possible recipients is expanded. Previously, these were families in which at least one child was born after January 1, 2018. Now the program can be used by families where there are two children who are not yet 18 years old; the children’s date of birth does not matter.

– in other regions – 6 million rubles.

You can borrow more money from the bank. But anything over the limit will be issued at the rate of a conventional mortgage (today it’s 10 to 11 percent per year). The maximum amount of such a loan is 30 million rubles in the capitals and regions and 15 million in other regions.

For example, if you buy an apartment in a new Moscow building under the preferential mortgage program for 20 million rubles, you will be given 12 million at 8%, and another 8 million at a higher rate.

What else has changed since January?

– The cost of tickets in compartments, SV, luxury cars of the trains of the Federal Passenger Company (this is almost all long-distance trains) increases by 8.1%.

– There will be no more 30% discounts when paying fees through the public services portal.

– There is a new fee for motorists. For tuning, the issuance of a tuning permit (officially this is called making changes to the design of a running vehicle) you have to pay 1000 rubles. Until January 1, this permit was issued free of charge. And the fee for issuing a safety certificate for a car with a modified design increased from 800 to 1000 rubles.

– The single tax payment law entered into force. A company can transfer taxes and insurance premiums in bulk, all in one payment to a single tax account, and the tax office itself will distribute the money for its intended purpose. This is supposed to free companies from a superfluous flow of documents.