New Year’s holidays of the stars: Kirkorov stayed in Moscow, and Kalashnikov is studded with diamonds in Dubai 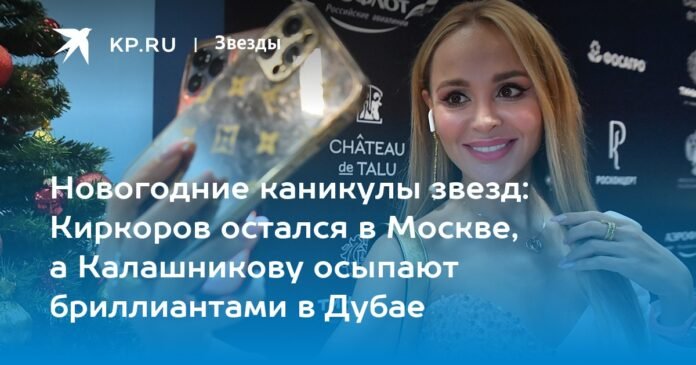 Anna Kalashnikova admitted that she received an expensive gift – a Cartier pendant in white and yellow gold with diamonds.

Usually, after January 1, Philip Kirkorov went with his family to Miami, but this year the artist celebrated the New Year in Moscow and it seems that he still has no plans to fly anywhere.

Philippe celebrated the holiday at his mansion, where he organized street festivities for children with pancakes and fireworks.

– I am an absolute inhabitant of the city, but now you cannot drive me out of my house (the artist built a house on the Myakininsky Peninsula – Ed.).

As Count of Monte Cristo, I live on an island. Well, this is a peninsula, but practically an island, because there is water everywhere, says the artist. I also have a small chapel there. Sofrino artists, very talented icon painters, painted the temple. By the way, there are Athos icons.

On New Year’s Eve we played bingo and watched TV. I have a relaxation area at home. My friends gave me a very comfortable massage chair. I turn on the button there (there is a mode that I like – stretch) and relax in front of the TV (Alsu’s gift, by the way).

The chair helps me keep in good shape, because I don’t play sports. Sport and I are incompatible.

Having celebrated the New Year, Philip Kirkorov went to a performance in one of the capital’s restaurants. The work awaits the artist on another holiday. In the new Live Arena concert hall, the artist will take part in a musical performance during the New Year holidays.

But the singer Vavan, actor Vladimir Selivanov, known for his role as Vovan from “Real Boys”, flew to rest in Nalchik.

Vladimir Selivanov, known for his role as Vovan from The Real Boys, flew to Nalchik to rest

– We recently shot a video clip “Saturday Evening” in Nalchik and I really liked it there. Nalchik is known to all for its incredible natural beauty. He is loved for clean air, mineral springs, the beauty of the mountains. I decided to celebrate the New Year in such places – Selivanov told kp.ru – I was tired of all kinds of Thailand, Dubai, Egypt. I wanted to hold the holiday in our area. I want to spend the holidays in an authentic place, in a hotel in the mountains, far from the city, to be in silence and preferably without any communication.

And the talk show star and singer Anna Kalashnikova, on the contrary, loves luxurious vacations. The artist celebrated the New Year in Dubai. And there she spends the New Year holidays. Anna admitted that she received an expensive gift: a Cartier pendant in white and yellow gold with diamonds.

According to experts, the decoration is worth more than 1 million rubles. According to Kalashnikova, the jewelry is a gift from a fan.

Yana Rudkovskaya prepares to collect the harvest of gifts. The famous blonde’s birthday is on January 2, which the producer will celebrate on ice, at Evgeni Plushenko’s New Year’s show “The Snow Maiden”.

– Zhenya missed the premiere due to a high temperature of 39.5, her husband had the flu, explains Yana Rudkovskaya. – But on my birthday, Zhenya will go to the ice. By the way, we have a double holiday on this day. I was born on the same day as my mother Svetlana Nikolaevna. Of course, the whole family will be at the show and congratulate us.