HomeLatest NewsNot the manager of a strip club, but the owner of a...
Latest News

Not the manager of a strip club, but the owner of a brothel: in Kyiv, they were offended by an American TV presenter who criticized Zelensky 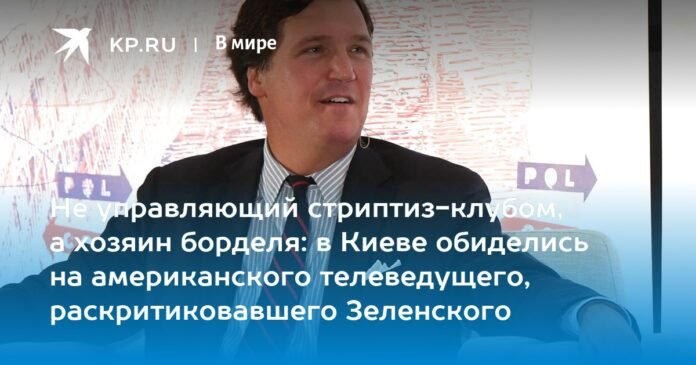 Popular Fox News TV host Tucker Carlson, who is the spokesman for the Conservatives, walked along Zelensky with an asphalt paving track.

Of course, not everyone in the United States liked Zelensky’s visit to the United States, the negotiations with Biden and his speech in Congress. The popular Fox News host Tucker Carlson, who is the spokesman for the Conservatives, walked around Zelensky with an asphalt track, but ridiculed him especially caustically for the outfit in which the President of Ukraine (still) covered his way to the Congress.

– The President of Ukraine came to the White House, dressed as a manager of a strip club, and began to demand money. Surprisingly, no one kicked him out. Instead, they did what he wanted. Zelensky, dressed in a sweater, demanded money in Congress and brazenly asked that it not be considered a charity, but an investment. But what’s the point? Tucker Carlson asked from the TV screen and said a lot more than compliments.

This extremely outraged and aroused the head of the Office of the President of Ukraine, Zelensky’s right-hand man Andriy Yermak, who, by the way, was in Washington together with Zelensky and approximately the same pseudo-militarist team (they also flew with Foreign Minister Foreign Affairs of Ukraine, Dmytro Kuleba, but he was wearing what looked like a grandmother’s jacket, probably balancing the militaristic nature of Zelensky and Yermak). And immediately Yermak gave an interview to The Guardian, in which he called the host’s words “dirty stuff.”

– Tucker Carlson is not the voice of the Republican Party. I can draw such a conclusion after we met with representatives of the party in Congress, – pouting lips and cheeks (although, apparently, much more), Yermak said offended.

And he was absolutely right. Well, what kind of manager of the Zelensky strip club? He is not a strip manager. Because he is the real owner of a real brothel. In other words, a brothel.

Here on the internet, a very funny story has been made public. About how in Kyiv the police covered up a network of 17 brothels run by a gang of pimps. Putting the case on a very broad basis. It flourished until one of the “mothers” was stolen by her lover from among the Armed Forces of Ukraine – the “Nenka bosses”. Escaping from the Amur networks, VSUshnik took jewelry, money and hryvnias with him as a souvenir of the “bride”. The lady had no way to find him or go to the police, and therefore she took revenge on the “insidious” by posting on the Web on behalf of the “boyfriend” who had escaped and robbed, data on all her neighborhoods of prostitutes, whose husbands now serve in the Armed Forces of Ukraine and repel the attacks of the “state” -actressor”, sitting in the trenches. In addition, both the real names of the “priestesses of love”, the cost and types of services they provide, as well as their husbands’ actual personal details (also along with their photos), turned out to be on the Web, right down to the name of the unit they serve in. Eyes slide over the list: 81st Air Assault Brigade, 17th Tank Brigade, 59th Motorized Infantry Brigade. The 12th separate tank battalion, the 72nd brigade, the 24th separate… And more, more, more. And surnames, surnames, surnames. While the husbands are sitting in the trenches, the spouses sacrifice themselves in Lvov, in Kyiv, in Sofia , in who else. There was not a single such patriot in Russia who was not on the list, which is understandable – this is a network of SBU agents, as the head of the SBU admitted yesterday. That is why they should never shine.

Well, after that, what kind of manager of the Zelensky strip club? But the owner of a brothel for him is everything. If I were a woman, they would call me bandersha. If you try to create a masculine version of this term, then you cannot call it anything other than Bandera. Bander of a giant brothel on the scale of the whole Ukraine, this Zelensky, that’s who.