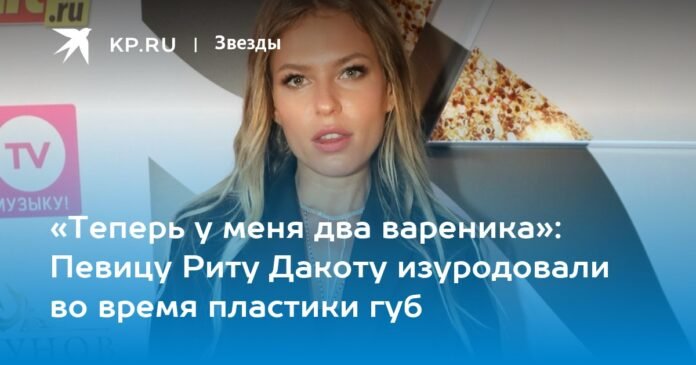 Singer Rita Dakota said she was the victim of a plastic surgeon. The artist wanted to get rid of the asymmetry of the lips, but in the end she became the owner of plump lip dumplings. On social media she talked about her misadventures.

The singer admitted that she did not immediately decide on lip correction. But little by little she realized that she wanted to improve them.

“With age, and especially after childbirth, the upper lip on one side has thinned a little more than on the other. You don’t see this, because on the one hand I correct it with a pencil in the color of my lips”, explained the artist.

Dakota decided that the New Year holidays are great for a cosmetic procedure.

“I found a clinic where a master works, who amazingly eliminates asymmetry. It does not increase the meatballs, but it works perfectly with the form. Before I left, I saw that I had been booked with another teacher. And then I had to say, “No, I’m not going to you,” but I felt a little embarrassed. They found me a window on vacation, the master arrived before the opening of the clinic, and the manager assured me that he works in the same technique. My ability to say that did not give a hole. And I went,” said the singer. The result surprised the singer.

Rita is not happy with the result of the plastic surgery. Photo: video frame.

“Now I have two meatballs. Fedya (the singer’s boyfriend – Ed.) is going to kill me,” Dakota said.

The artist asked subscribers what to do: immediately get rid of the consequences of plastic surgery or wait until the swelling subsides. Fans advised the artist not to rush and still wait.

Rita never hid that she was repeatedly under the surgeon’s knife. She removed excess fat and corrected her nose. In 2019 she had liposuction and, according to her, she gained self-confidence.

The singer does not know what to do. Photo: social networks.

“I recently had liposuction. I took off what I couldn’t take off after childbirth, hormonal failure and edema due to stress, not because of sports, not because of nutrition, not because of the team, not because of lipolytics, not because of massages, she shared on social networks . – I did not get any silicone implants in my chest or ass, I corrected with 3D sculptures what I could not accept in my body that had changed after childbirth and hormonal failure, which caused me complexes, pain and rejection of my reflection. I consider it a cruel and cynical contribution to the accumulation of complexes and injuries in ordinary girls who cannot lose weight on their own and cannot afford such a procedure either. I am an expert in being honest with my audience, an expert in women’s solidarity, so I promised myself to tell my experience as soon as the right time comes.

Divorce from her husband forced Rita to be under the knife of a plastic surgeon. Singer Vlad Sokolovsky, after breaking up with his wife, turned to financial model Natalya Sulyanova, which was another blow to Dakota’s pride. It should be noted that the psychologist who helped Rita after her divorce approved her plans for liposuction.

After a painful break with her husband, Rita did everything possible to start her life from scratch. She recorded new songs, went on a trip, changed her social circle (according to the singer, her husband slept with her best friends, and everyone knew about it except her). Immediately after Dakota found out about Sokolovsky’s numerous betrayals, she began to drown her grief in alcohol, smoked one cigarette after another, and even wanted to change her appearance to resemble her husband’s lovers. But over time, she pulled herself together and changed her life completely.