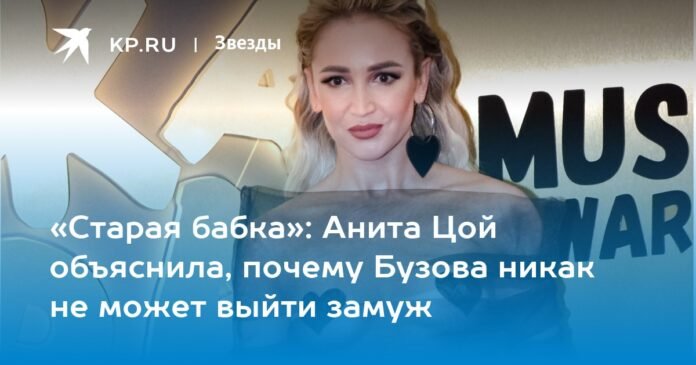 Olga Buzova is one of the most popular show business stars of our days. She sings, hosts TV shows, acts in the theater and is involved in dozens of other projects. Olga has popularity, fame, money. There is only one thing – happiness in personal life. The singer openly declares that her main dream is to get married and have children. But she just doesn’t get along with it.

Buzova’s colleague in show business Anita Tsoi explained why Olya could not find the man of her dreams. The actress gave the singing TV presenter valuable advice: do not delay and try to get married as soon as possible. After all, Olga is already 36 years old and every year her chances of putting a stamp in her passport are rapidly decreasing.

– Olya, listen to me. At forty, you are an old grandmother and no one will marry you. Seize the moment while you have skin, youth, color, buzz! Get married now! – Anita Tsoi turned in absentia to Buzova, speaking with MK journalists.

Of course, in the words of the singer there is something of a joke. However, Anita is sure that time passes and, in the end, fame and money will be just tinsel that she will not be able to save from loneliness.

– The main thing is not to miss the moment. Our achievements, profits are all tinsel. Before God, when the most important moment comes at the end of life, we are all equal. At that point, no one will need anything, Choi says.

Anita has been happily married to the same man for 32 years, so she knows exactly what she’s talking about. The singer manages to harmoniously combine a career on the stage and personal life. But Olga Buzova, it seems, simply cannot tell herself “stop” and pay attention to something other than work.

“Olya is very strong, she cannot stop,” Anita explained the reason for Buzova’s loneliness. – She is very ambitious. For an artist who wants to reach great heights, this is normal. But for a woman – not too good.

Olga recently showed off one of her main achievements in recent years: she completed the remodeling of her new apartment. The luxurious apartments are finished with Italian marble, expensive furniture and mirrors are everywhere. A 220-square-meter apartment, which has a 30-meter dressing room and from which you can see Moscow State University, cost Buzova 120 million rubles. The neoclassical reform cost another 80 million.

Buzova’s luxurious apartment for 120 million rubles even has a fireplace. Photo: video frame.

Buzova did not celebrate the housewarming alone: ​​her dog named Eva moved into the new house with her. On this occasion, Olga even bought a new bed for the dog. True, before the New Year, Buzova was forced to give the dog to her father. Due to her frequent moves, she was unable to care for the pet. If this goes on, Olya will spend her evenings alone in her huge apartment.

More recently, Buzova admitted that complete calm reigns in her personal life. Perhaps the singer herself is unlucky with men because of the train from the scandalous show “Dom-2”, in which she began acting at the age of 18. Buzova had an affair with the participant of the TV show Roman Tretyakov, but they soon broke up. In 2012 (she was then 26 years old), Olga married footballer Dmitry Tarasov. The couple lived together for only four years, and for six years this scandalous marriage has been discussed on the Web. Buzova accused her husband of greed for her and that, after her breakup, he threw her out of the house without a penny of money.

Olya celebrated the housewarming party with her dog Eva. But he soon gave the pet to his father, because he couldn’t take care of it. Photo: video frame.

With another of her lovers, David Manukyan, Olga also parted not amicably. The singer’s father said Manukyan proposed to his daughter for her hand. The parents of the TV presenter were very happy – they decided that Olga would finally get married and be happy. The host’s father was very upset when he found out that his daughter once again failed to start a family.

The rapper invited the presenter on romantic dates, showered her with expensive gifts and delighted her with surprises. But, becoming more popular, Manukyan began to move away from Buzova. The fans decided that Dava was using the Doma-2 star for personal gain and it seems they were not wrong. In addition, Olga accused her boyfriend of assault, so her breakup was inevitable. They announced their separation at the beginning of 2021, and since then Buzova has not introduced a new guy to the public.