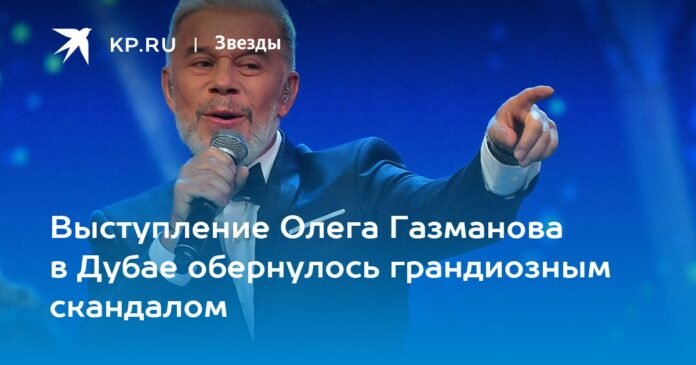 Oleg Gazmanov and his wife Marina enjoyed their vacation in Dubai. The spouses decided to celebrate the New Year in one of the elite establishments. There were many Russians among the guests. The celebration was accompanied by performances by famous artists. At some point, Gazmanov was called to the stage.

Oleg Gazmanov almost got into a fight at a concert in Dubai. The artist is known for his patriotism. He was one of the first to support Russia’s special operation in Ukraine. Because of this, the vocalist fell under EU sanctions.

And the other day the musician suffered for his patriotic views while on vacation. Together with his wife, Marina, he went to the spa. The couple decided to celebrate the New Year in one of the nightclubs in the United Arab Emirates. Gazmanov’s colleagues in show business were performing there. At some point, the performer of the hit “Officers” was called to the stage, the singer at first did not want to go out, but later agreed.

During the performance, two spectators approached him on stage and taunted him. They began to aggressively grab Oleg Mikhailovich by the hands, pulled out the microphone and demanded to talk about the situation in Ukraine.

Gazmanov at first did not pay attention to the uninvited guests, he continued to talk. However, the men did not relent. They were ready to get into a fight, they began to demand that the artist say something into the microphone. To this Oleg Mikhailovich replied dryly: “Guys, let me rest.”

What happened unpleasantly struck both Gazmanov himself and his wife, who witnessed an unpleasant scene. The rest of the star couple was spoiled, so the couple decided to hastily leave Dubai.

The singer’s wife wrote in the blog: “Thank you, Dubai, for your hospitality. Now there are a lot of Russians here: some are resting, others, like us, are working. The United Arab Emirates is a territory where they monitor any hostility of a persuasion political or cultural. Tourists must come here “without their samovar”, then all the benefits of this country will be at their service.”