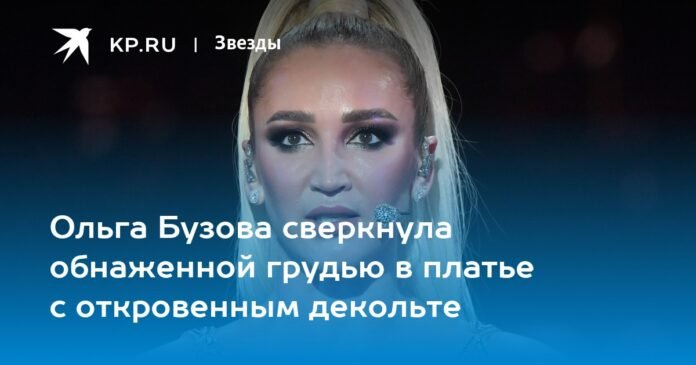 Olga Buzova knows perfectly well that her charms are the most winning option to make everyone talk about her. Last night, the singing TV host appeared at the 2022 Fashion New Year Awards in a very revealing outfit. The 36-year-old actress opted for a leather dress with a racy neckline that exposed her breasts.

The singer appeared on the red carpet in an outfit from the Italian brand Moschino. The highlight of her image was the spectacular undercuts under her breasts, which leave no room for her imagination. The photographers who captured Buzova were worried (and hoped in their hearts) that the leather strap covering her bust was about to come off. Olga completed her look with massive platform boots, leather gloves and a wide gold necklace with a giant Moschino logo.

The actress chose to go out with a leather dress with a spicy neckline that exposed her breasts. Photo: social networks.

Having received a fashion award, Buzova did not stop performing with the award in a video that she posted on her page on social networks.

On the eve of the fashion award ceremony, the TV presenter complained to subscribers about being overweight. The artist admitted that she recovered and now she is forced to spend a lot of time in the gym. Olga complained that it was hard for her to get to the simulators. Buzova is having a hard time recovering from her illness and is returning to sports with a crunch.

The singer appeared on the red carpet in an outfit from the Italian brand Moschino. Photo: social networks.

“I just forced myself to come practice. I got sick and didn’t exercise. When you are sick, you cannot do anything at all. And I worked. Now I forced myself, because I need to return the tone. It’s very difficult!” Olga confessed.

Having received a fashion award, Buzova did not stop acting in a video with an award. Photo: social networks.

However, looking at her tight dress, it seems that the artist is slandering herself. If she did improve, it was only a little.