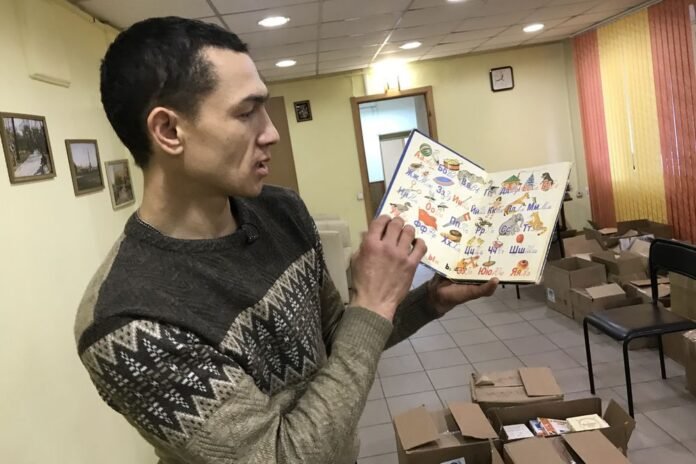 Three weeks passed, I arrived in Donetsk, and the first thing I decided to do was go to the library that needed books. And here miracle number three happened: at the same moment my good friends from the fair turned out to be there, they unloaded the books collected in the capital a few hours before my arrival. Keep your word! This in itself means a lot these days.

“We brought 83 boxes of books to Donetsk, which is about two tons, they gave us a lot of space in a truck with humanitarian aid,” says Yevgeny Fadeev, vice-president of the Mama association of charitable foundations.“There is unique literature. here, some books are not yet on the shelves Moscow, there are books with autographs of the authors, at the fair many writers came to our counter and asked to take their works to Donbass.

Among those who donated their autographed books is Lyubov Kazarnovskaya. “Dear brave and strong warriors! Strength and strength of heart to you! Soon there will be light everywhere!” – wrote the opera singer with a wide and confident handwriting.

Modern science fiction writers, scientists and journalists donated their books to Donetsk. And on each endpaper or on the first page touching good wishes “To the residents of Donbass, with love.”

In the central city library I also met Vasily Alexandrov, director of the RusHelp Foundation. It was they who found a place in their carts for the books. “We have already delivered 15-16 tons here for sure, starting in 2014! – says Alexandrov, – for fighters, the means of warfare are now paramount, no one disputes this, but books are the foundation on which a new generation”. being formed, where does the Russian spirit come from?Of course, from books.

But the main question that personally tormented me for the first few minutes, while we were talking with the volunteers and the library administration: are there any readers? The central library is located in one of the streets that has been under fire lately, when I drove here, the cannon shots rumbled, from the reports I also remembered that a shell had recently flown towards the building where the Central City Hospital is located.

– I remember in 2014, when the city was empty, everyone was surprised – what are you doing? – recalls the director of the Central City Hospital Tatyana Avraimova. – And when the special operation began, they also began to call us, asking: are you working? And people didn’t even believe we were working. They asked again: are you sure you work? We tell everyone: we work, we work and we will work.

Since the age of 14, the Central City Library has not really been closed, only the working day has been reduced. Over the years, it was the Central City Hospital in Donetsk that became one of the centers of attraction for people: at first they collected medicines for the militia, then they began to hold meetings with famous people of Russia, they also organized the collection of information about the dead, librarians publish booklets with the stories of the heroes at their expense. At the same time, as in any other library in Russia, exhibitions, master classes and holidays are regularly held here. Life goes on as usual, despite Grada and other “gifts” falling out of the windows.

I’m going to subscribe The spacious room is full of shelves, there are posters, advertising papers, portraits of writers on the walls. Several people choose books.

– Since the beginning of the war, Donetsk residents began to read detective stories and women’s novels more for distraction, this is understandable, – librarian Anna Margun shares her observations, – but since February of this year, more and more people began to ask for Russian classics, they also read foreign ones. And sometimes I even ask: which is better? They answer that what is ours is deeper, allows us to reflect and live with the heroes of the country’s history.

One of the readers in my presence takes Sholokhov, two heavy volumes. “See you in the New Year,” says the librarian. “No, I still have time to come on this one.” Later I will realize that in Donetsk everything is done quickly: they move, eat, read …

The library staff began to classify the books brought by the volunteers on the same day, they must be transferred to the liberated territories in time. Again, later I will understand why the librarians were in a hurry – quite smart people in Russian-speaking Mariupol surprised me with their ignorance of the works of Valentin Rasputin, Vasily Belov … But this is not so bad.

“It is very difficult with the fund, because it is, I would say, “dirty”, saturated with Nazism, Bandera, it is scary, what textbooks, what books! Funds “cure”.

Volunteers ask that not only novelties, but also Soviet books be delivered to the liberated territories, because Muscovites also brought old covers to non-fiction, they brought them from the bottom of their hearts. In one of the boxes I also saw the famous blue primer, the same one that the first grades of the whole Union studied, and that in the nineties was still in use. It is here next to the word “mother” is written – “Motherland”. capitalized.

“To the world, to the world!” – also from this primer.