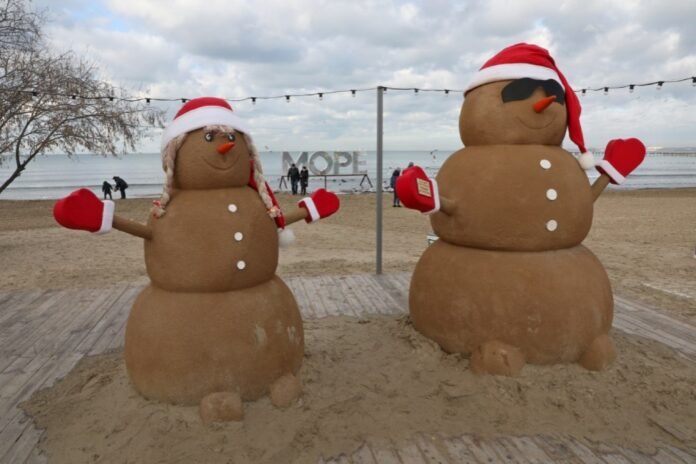 Even in the morning hours, the golden coast does not seem deserted: someone, warming themselves with coffee from a thermos, watches from the bench the hustle and bustle of herring gulls in the sea, someone walks along the wooden paths, examines the art objects. , which have become more this year.

At the resort’s central beach lounge, vacationers are greeted by a huge family of sandy snowmen: Mommy, Daddy, and their two snowmen. A year ago, an unusual beach creation immediately became the record holder for photos taken against its background. As the volunteers who were on duty at the site explained, the popularity of the sandmen affects their integrity, which is why one of them now sports a warning inscription on the red mitten: “The figures are decorative. Don’t touch them with your hands. ” Of course, this stops few people, so they are “patched” periodically.

A Christmas tree decorated with handicrafts of Anapa craftsmen was placed on the nearby stage. By the way, in addition to the dolphin and the starfish, the southern brother of the miniature snowman also sways on the green legs of the fir tree. During the holidays, various workshops on the creation of Christmas candles and decorations, concerts and New Year’s performances will take place on the stage. And on the big screen the popular films “Carnival Night”, “Ivan Vasilyevich changes his profession”, “Magicians” and others will be shown.

Usually, on New Year’s Eve, the air temperature in Anapa is quite comfortable and allows you to be in the fresh air for at least a whole day. During the walk of the “RG” correspondents in the cloudy sky, the sun continued to rise, outside it was more than eight degrees and it was calm. But still, you should not be fooled by the sun’s rays, it is better to dress warmer, and during a long walk, a scarf and hat will obviously not be superfluous.

– If during the high season bustle reigns on the beaches of Anapa, then in winter the resort is a time of calm and relaxation. We call this period the “calm of life”, because vacationers immediately fall into the leisurely rhythm of life, – said Deputy Mayor of Anapa Vitaly Voronov. – Guests can take walks along the shore, go to the New Year’s show at the Dolphinarium, visit the surrounding wineries. In the main archaeological museum of the Gorgippia resort, where unique ancient artifacts are presented, the Heracles Knot interactive park will be open every holiday. Visitors have a unique opportunity to try on the armor of an ancient warrior, transform into an ancient craftsman of the Greek city, and children will be able to play games that were relevant among their peers two thousand years ago.

In fact, peace of mind is visible in everything: no one is in a hurry on the streets and the embankment. They do not have a snack to go, but on closed terraces overlooking the sea, they carefully choose a memorable souvenir for themselves in one of the shops on Art Avenue on Gorky Street, leaf through books in the street library. Numerous cats, who are loved and pampered in the city, also create peace. For them, local craftsmen built special houses on the embankment. Liners were placed inside the log cabins and even the entrance was hung with cloth so that no one would interfere.

This year, all large-scale festivities and fireworks have been canceled, however, a rich educational and sports program has been prepared for residents and guests of the resort. Anapa will host the Winter Storm marathon, e-sports and beach floorball tournaments, and the beach hall will host exercises, children’s animation and open lectures. In the park of the 30th anniversary of Victory, opposite the Ferris wheel, a new fair “New Year’s Carousel” was opened, where you can buy not only a handmade gift, but also sweets, cakes, tea from lavender. And with the arrival of darkness, the recreational areas are instantly transformed, illuminated by the light of the lights.

In addition, in Anapa there is a unique opportunity to get acquainted with the secrets of winemaking, breathe in the spicy aroma of French oak barrels and bring a quality drink to the table. So, 11 kilometers from the resort, among the picturesque slopes of the village of Varvarovka, a gravity-type winery “Rocky Coast” (Cote Rocheuse) was recently opened. The company is located next to the famous Utrish nature reserve, and it was designed in such a way as to organically fit into the pristine nature of these places without disturbing the harmony. Of the 98.5 hectares that belong to the “Rocky Coast”, the vineyards and the production building (in the form of giant stones pierced by the sea) occupy only one third. The rest of the territory is relict forests, which are carefully protected.

Two food and wine tours operate here at the same time. One is a detailed tour of the vineyards and production facilities, culminating in the two-hour drive with a tasting of a variety of premium wines. The second tour – “Wine and Stars” – includes an exclusive night tour of the winery and the study of the sky with a powerful telescope. “Space Walk” is led by the popularizer of science and author of the book “How to look at the stars” Ruslan Ilnitsky.

– Often guests come to us with a purpose. These are those who want to learn to understand wines or learn something new, – Konstantin Nadelin, general director of the winery, told the RG correspondent. – In the summer, excursions were held almost every day, we gathered small groups, up to ten people, so that the participants could feel the atmosphere of the birth of high-quality wine without problems.

Due to the closure of the Vityazevo airport in Anapa, tourists come to the resort by car or by train. In most cases, these are residents of the Krasnodar Territory and neighboring regions. Although the “RG” correspondents met on the street and a traveling family from Murmansk.

“We decided to move here completely, we are settling in for the second month,” the head of the family shared. – Mainly for the winter, here it is very temperate.

– We came to Anapa for a day from Novorossiysk to recharge with a festive atmosphere, to visit chic places, – Olga, a mother of two children, shared.

According to the mayor’s office of Anapa, during the New Year holidays, the average load of accommodation establishments will increase from 37 to 55 percent, the expected tourist flow during the holidays will exceed ten thousand tourists. Thanks to the Southern Health Resort program, which offers comprehensive health tours at a good discount of up to 35 percent, many people now voluntarily stay in resort sanatoriums, where the average price of accommodation is two thousand rubles per day.

In the park named after Gudovich in Anapa, next to the museum of local lore, squirrels settled. As they said in the mayor’s office of the resort, the furry animals were brought from Sevastopol. For the new settlers, houses were installed in the tops of the pine trees and in the lower part of the feeders. These animals are famous as forest gardeners: they help the growth of new trees, hiding cones and nuts. As soon as the squirrels get used to the new environment, they will delight the townspeople and vacationers. But it is recommended to visit them not empty-handed: in winter, animals can be safely treated with raw seeds, nuts and dried fruits.