HomeLatest NewsOn the set of The Silence of the Lambs, everyone was terrified...
Latest News

On the set of The Silence of the Lambs, everyone was terrified of Anthony Hopkins. And he was terribly amused! 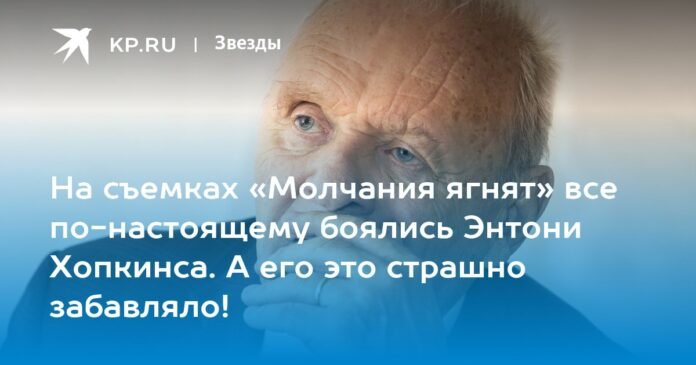 Sir Anthony Hopkins said of his childhood: “As a child I was very lonely, isolated, never close to anyone. Ask nothing and expect nothing, that’s my motto.” He still calls himself a loner today. When he was over 70, he was even diagnosed with autism (apparently, we’re talking about Asperger syndrome), but Hopkins dismisses this diagnosis: he says this is just a fancy label doctors put on him “People have destroyed their entire social system by trying to tabulate everything.” We have always been and always will be. If we were smarter, there would not have been so many wars and bloodshed in the world century after century … “And in another interview he said:” We are all just a gang of sinners, tearing apart darkness and crashing to the ground.

On the one hand, Hopkins managed to break relations with his only daughter. He breaks down to such an extent that now they don’t even know if he gave her grandchildren. And when asked how it happened, he replied: “I have no idea. People break relationships. Families are destroyed and – “live on, as you know.” I don’t care anyway”. Perhaps someone will see something autistic in such a cold (or just extremely reserved) response. But… It is unlikely that an autistic person would have been able to play several dozen roles in theater and cinema with such brilliance and emotion, to receive two Oscars and, long before his 85th birthday, begin to be considered one of the best and most beloved public actors on the planet.

Hopkins has no equal in the role of villains (Hannibal Lecter consistently ranks first in the ratings of the best villains in film history), but he himself cannot be called either evil or squeamish. He celebrates his birthday with a somewhat tired person. Ten years ago, a Guardian correspondent asked him in an interview: “What do you consider to be your greatest achievement?” Hopkins responded: “Now everything is blending into one. It was very nice to receive an Oscar, but now it’s rusting and losing its shine in my cabinet next to the TV. None of this should be taken too seriously. Death comes to all of us. I was recently in Arlington Cemetery at Kennedy’s grave, and I thought that the great years of his presidency had now simply blown to dust in the wind. Nothing really matters. And bring peace.”

Here are some more facts about this prominent man.

Anthony Hopkins was born in Port Talbot, a town in Wales. His father was a baker, his mother came from a family of metalworkers. The son grew up as an extremely reserved child, immersed in his inner world. But contrary to his own claims, he did have friends, according to his biographer Michael Feeney Cullen. Just a little, and more often it was the same loners. One remembers: “Tony was eight years old when we met. A loner with a fascinating and unusual range of interests. He loved astronomy and rubbed eloquently about the Big Dipper and other galaxies. In fact, he taught me everything I know about the stars. He loved Russian history, Russian legends. He also liked to parody modern, radio and stage stars.

Tony also begged his father to buy him a piano, which ended up taking up half the room. Since then, music has become his passion. He has spent his whole life composing it, in 2012 he released an album. “If I had done well in school, I would have gone to a music school,” he says. But in school he studied filthily (which gave him an inferiority complex: Hopkins recalled that he grew up thinking he was stupid).

“I drank everything that came up to me”

And then, little by little, he became interested in acting. And after serving in the army, he began to try himself as an actor. A few years later, Hopkins was already 27 years old, he was very lucky – Laurence Olivier, the most famous actor and director in Great Britain, became interested in him. He named Hopkins as his understudy in Strindberg’s Dance of Death. And then one day Olivier went to the hospital for an operation, and Hopkins went onstage in his place. He was terribly nervous, but the public received him well. (Olivier later told him, “Nervous is conceited; you’re worried about what others think of you. Fuck it!”)

The theatrical career was developing well, and they began to call him in the cinema; he played, for example, in The Lion in Winter (and was nominated for the British Oscar-BAFTA Award). But it could all end due to the addiction to the drink. “I was at the mercy of burgeoning alcoholism… I drank as much as I got, but I couldn’t handle it.” He eventually made an appointment with Alcoholics Anonymous. And after talking with the manager of the group, I literally heard a voice in my head, like from heaven: “That’s it. Now you can start living “. He considered it something like a miracle. And sure enough, he soon managed to tie for good.

Anthony Hopkins as Hannibal Lecter in The Silence of the Lambs

How he had an epiphany at the Oscars

Movie roles continued to be good; for example, one of the key roles in David Lynch’s The Elephant Man. But Hannibal Lecter, of course, made him world famous in The Silence of the Lambs. Director Jonathan Demmi saw Hopkins in The Elephant Man and decided that he would make the perfect Hannibal. After a joint test, Hopkins and Jodie Foster realized they couldn’t find a better pairing for the film.

Hopkins filled the script with notes and drawings, imagining what Hannibal would look like smiling. He read his text aloud 250 times, and only after that did he feel he could improvise. Michael Feeney Cullen writes: “Jodie Foster openly admitted that he was ‘scared’ by his presence, and the team avoided him when he was in disguise. Hopkins found it extremely amusing… One of the cameramen said: ‘The nicest part of it all was when they locked him up. in a cage.It was simply impossible to feel calm until he was put under a reliable lock.

And then there was the Oscar ceremony. Hopkins was nominated in the Lead Role category, even though it’s essentially a supporting role (he spends only 24 of the film’s 118 minutes on screen). And Nick Nolte, who played in the film “Lord of the Tides”, was considered the absolute favorite. Hopkins himself did not believe in his victory until the last minute, when they began to announce the winner. As the list of nominees was being announced, an idea occurred to him: “I just realized that he would win. I don’t know what forces were at work here, but it was like deja vu.”

He received his second Oscar for the film “Father” in 2021. And the situation repeated itself: everyone was sure that the Oscar would go to Chadwick Boseman (the black actor died six months before the ceremony, this was the last chance to award him) . Hopkins’ victory came as a literal shock to many, some were stunned when Renee Zellweger called out his name. And he himself was not present at the ceremony, and, they say, he did not even see her on TV: at that time he was only sleeping in his house!

Share
Facebook
Twitter
Pinterest
WhatsApp
Previous article
Two earthquakes are registered near Kamchatka KXan 36 Daily News
Next article
Taking the pulse to 2023: the approach to investing after the end of the era of easy money