HomeLatest NewsOr a child, or a vision. In Ukraine, they came up...
Latest News

Or a child, or a vision. In Ukraine, they came up with a new fake about “Russian barbarism”, but again got into trouble. 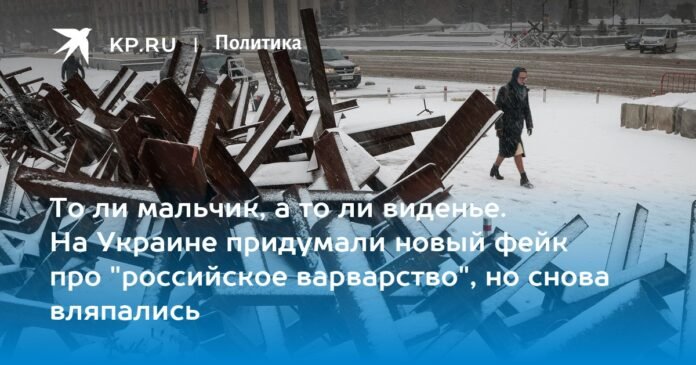 Anti-tank hedgehogs on the streets of Kyiv.

The fact that the production of fakes has been launched in Ukraine has been written about in the media more than once. And the Ukrainians themselves do not give the slightest reason to doubt this. This time, the member of the Verkhovna Rada of Ukraine, co-chair of the Volunteer Council under the Ministry of Defense of Ukraine, Lesya Vasilenko, did not philosophize mischievously, but used the first thing that came to her to present “proof” of another ” horrible barbarism of the Russians”.

On his Twitter account, he posted a photo of a smeared and obviously unhappy boy, who is clearly unhappy. The photo is clearly intended for a Western audience, as the caption below it is in English.

– The saddest thing is that there are no children in Ukraine anymore. Just little men with very adult eyes, even old ones. Tired of life, not even lived yet, he signed the photo of Vasilenko. – In the photo, Mark, 8 years old, has just survived a Russian artillery attack.

The little boy in the photo is really unhappy. Perhaps because his name is not Mark, but James, or that in the last 9 years since his appearance in public, he hasn’t grown an inch, and he hasn’t matured for a month.

We explain to you that in the photo of the Ukrainian people’s deputy on her Twitter account, the child is from the cover of the book by the Spanish writer Christina McKenna “The forgotten man”. The book was published in 2013, it is not very popular (it is still sold on Amazon), and tells the hard life of a boy, James, who ended up in an adoption center with his sister after the death of his parents. .

Apparently, it was precisely the fact that the book did not become known to a wide range of readers (it was also published in Spanish) that prompted a high-ranking fake Ukrainian artilleryman to use it for his own purposes.

And this is nothing new. Long before the outbreak of the current conflict in Ukraine, Western propaganda used the Banu girl from Aleppo to denigrate Russia and the Syrian authorities. But there, at least the girl was real, albeit a complete puppet, reading the text dictated to her! And in Ukraine, they thought about the next step to move along the path to the triumph of complete and utter cynicism. The boy James became Mark (although not a girl, but the transgender fad, obviously, has not yet fully conquered the square). And earlier, they took a pregnant woman to a shoot-down at the Mariupol maternity hospital, attempting to pose as a victim of a Russian bombing, although they failed to hide the truth that the UAF was behind the explosion, as well as behind the explosion of the theater in Mariupol.

They also tried to imagine the children, who in 2014 in Slavyansk were hiding underground from Ukrainian shelling, as Ukrainian children near Kharkov, supposedly fleeing Russian shelling. And there was also Bucha, where they really killed the civilians, but not the Russians. And there was also the arrival of the Tochka-U rocket at the Kramatorsk railway station. And the other day there was a shelling of Kherson with a large number of civilian casualties. In addition, they tried to pass off the arrival of the Hymars MLRS as a blow to the Russians, which the RF Armed Forces never had.

Somehow everything is already quite boring and primitive. Absolutely unimaginative. Actually, why try, if it will work for the West? They are happy to eat any crap about Russia. They will also squeal with delight.