HomeLatest NewsOut and about: Nikita Presnyakov and his wife celebrated the New Year...
Latest News

Out and about: Nikita Presnyakov and his wife celebrated the New Year in Hollywood 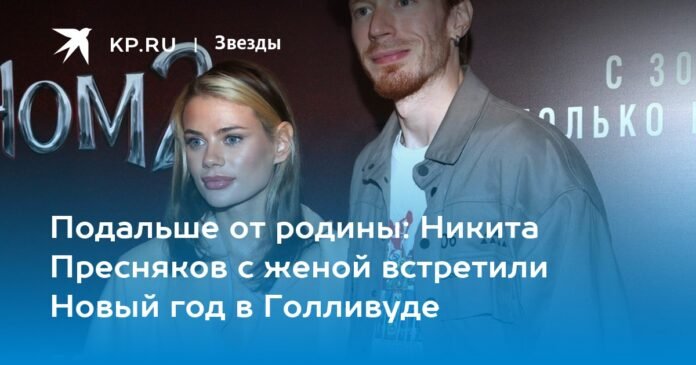 Nikita Presnyakov went to live in the United States in October. The movement of Alla Pugacheva’s grandson across the ocean coincided with the beginning of mobilization in Russia. The hasty departure of the heir to the star family made a lot of noise, especially since 31-year-old Nikita left Russia alone, without his wife Alena from him. But on the eve of the New Year holidays, the couple met. Alena flew with her husband to the United States. Catholic Christmas youth gathered in Hawaii. And the New Year has already been celebrated in Los Angeles.

Alena shared a video on social networks, which she signed: “And our New Year is just beginning”. In the video, Presnyakov Jr.’s wife poses in the lobby by the elevator styled and made up in a black mini dress. 25-year-old Alena said: “They are dressed, they are so beautiful,” showing Nikita in a festive outfit. With gallant gestures, she invited her companion to enter the elevator. Alena then showed how she and Nikita celebrate the New Year in a nightclub located in Hollywood.

Pugacheva’s grandson and his chosen one celebrated the New Year in Hollywood. Photo: video frame.

Apparently, in the USA, Nikita Presnyakov settled right next to the “dream factory”. According to rumors, a star grandmother gave her an apartment in Los Angeles. Alla Borisovna bought real estate with her savings. In Los Angeles, Presnyakov Jr. is shooting video clips. About this he spoke on social networks during a trip to Hawaii.

According to rumors, Pugacheva bought her grandson an apartment in Los Angeles. Photo: video frame.

“I finally escaped with my wife to relax for a couple of days! Recently, my field of clip making activity has skyrocketed so my brain was already churning. I found the perfect option, how to have time to reboot during work. I am recording a video of the singer in this beauty in a couple of days, we arrived a couple of days before to look for locations to film and see everything in one in a couple of days, “wrote the musician.

In the United States, Nikita has someone to support him. His mother Kristina Orbakaite lives here. The singer, together with her husband, the American citizen Mikhail Zemtsov, settled in New York for a long time. Her daughter Claudia, Nikita’s younger sister, also has US citizenship and attends a US school. Nikita may also have a US passport; this explains the fact that she started her career in the United States so easily. Although, as you know, this requires a work visa, which is not so easy for a Russian to obtain in the current political situation.

Nikita began dating Alena Krasnova when the girl was only 17 years old, she was still at school. Their relationship lasted four years, then the young people got married. Pugacheva’s grandson and his future wife met, as they say, on a friendly basis: the dachas of their families are located nearby. Alena comes from a fairly wealthy family. Like Nikita, her mistress was a creative person: she was fond of gymnastics, she danced in Alla Dukhova’s “Todes” studio and studied at a music school.