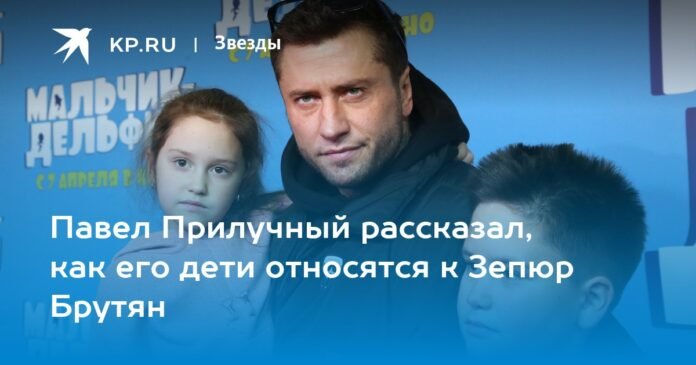 Pavel Priluchny with his daughter Mia and son Timothy.

After divorcing Agatha Muceniece, Pavel Priluchny continues to communicate very closely with his children, Mia and Timofey. Almost at the beginning of his relationship with Zepyur Brutyan, the Major star presented his chosen one to the heirs. According to the 35-year-old artist, his children warmly received his 26-year-old lover. Now they perceive the new wife of the Pope more like an older sister, and not like a stepmother.

“We talked a lot. They understand everything perfectly. They knew that one day I would find a girl who would be in our family. I set them up like this even before meeting with Zepyur. Timofey and Mia said about her: “Great! In general, a class. She is also curly, lovely. We like her. They treat her with respect. This is wonderful, “Pavel told Liza magazine.

The actor admitted that he does not understand parents who leave their children after a divorce.

“I don’t understand when parents leave, start a new family, get rid of the children. I’m glad everything worked out for me. They are together and it’s great,” Priluchny emphasized.

Pavel and Zepyur got married in August 2022. They met in 2018 on the set of the Caged series. At that time, Priluchny was married to Agatha Mucenietz. The Major star has been married to Agatha for nine years. The couple parted in no way friends. Muceniece accused her husband of abusing alcohol and raised her hand against her. Pavel said that she slandered him for the sake of PR. At the same time, Agatha always emphasized that Priluchny is a very good father, he spends a lot of time with the children and takes care of them tenderly.

We are bound for life. We are parents… We truly dedicate an impressive part of our lives to each other. Therefore, for me this (Priluchny’s relationship with Brutyan – Ed.) was not a surprise, I knew about it before. But she did not know that he was getting married, Muceniece said in an interview with Yulia Menshova.

In the same interview, Agatha complained that Pavel did not consider it necessary to warn her that he was going to take the children on vacation with a new passion. So, in June, Muceniece found out about the joint vacation of Timofey and Mia with dad and Zepyur Brutyan on social networks. The same situation happened when Priluchny immediately after the divorce had an affair with Miroslava Karpovich. He told Agatha that he would go with his son and her daughter to rest in the Crimea, and then Muceniece found out that Karpovich went there with them. The actress admitted that she was devastated by this circumstance. But she cannot influence her ex-husband in any way.

He introduced everyone immediately. Then, with Miroslava and the children, they immediately went to the Crimea. This was a difficult situation for me, I couldn’t understand how this was possible. And then it destroyed me. But I realized that this is how relationships develop, I cannot influence this person in any way and I will not. I’ll take care of the children later. I have wonderful children. They are open, friendly and loving people, – said the actress.