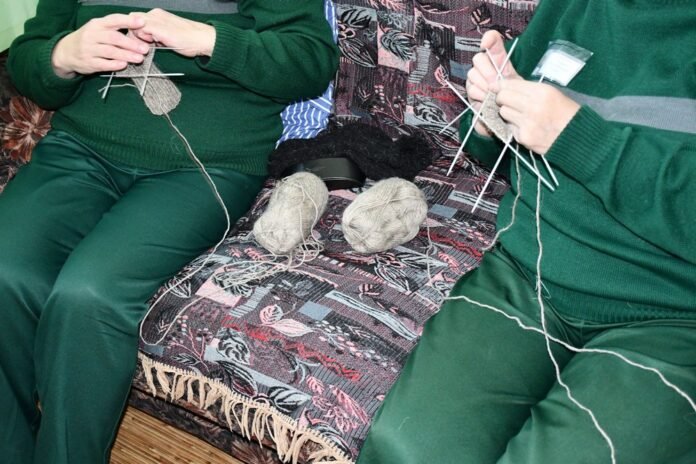 On almost all of their products, which are then centrally sent to the front, they also put notes with the wishes of a speedy victory. And also with the confidence that the warmth of their hands and hearts will surely reach every soldier who received a gift. “They knitted like relatives,” shares one of the artisans Svetlana.

The story told would hardly surprise anyone at Christmas, and even in such a year today everyone helps the army, from young to old. Only here the brigade of “skillful grandmothers” is already special in that they care about the world, being cut off from the big world in the correctional colony of Samara-15. They got here, of course, not for fabulous deeds, but for very real and very serious crimes. But, apparently, nothing heals the soul and unites the just and the stumbled like a common misfortune. In addition, the women here are fully informed about the events taking place behind the barbed wire: they not only watch TV and read newspapers, but also watch thematic films about the special military operation in Ukraine. Therefore, when the Vera Charitable Foundation turned to the leadership of the IK, and then to the inmates, with a proposal to knit socks for “ours”, about a dozen women who own knitting needles immediately agreed. (The foundation provides grandmothers with yarn, approved plastic knitting needles, and collects finished goods for the military.)

– Our colony is female, and employment is 100%, there are a lot of orders for the production of clothes, so there is simply no free hand or time, – says the head of IK-15 Ruslan Norin. – But the women of the pension group, who do not go to production, agreed to work with knitting needles. It was his voluntary decision. Many even taught each other, passing on the secrets of the craft.

They say that once the next batch of woolen threads was not delivered to the grandmothers on time, they were delayed for a while. So there was no sadder day for the artisans, as they themselves tell it.

Share
Facebook
Twitter
Pinterest
WhatsApp
Previous article
Garamendi boosts the Madrid employers’ association above the rest of the territorial ones
Next article
Semyon Der-Arguchintsev: Kyle Dubas is an open person. he watches every game