Pickle air defense and other “feats”: Zelensky was accused of imitating Ukrainian victories against the West 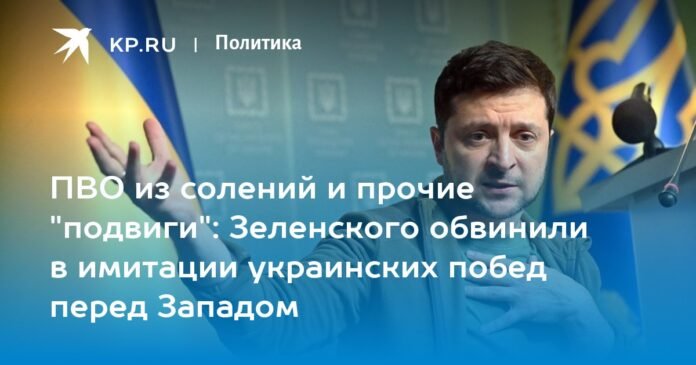 The journalist Mark Galeotti, in an article for The Times newspaper, predicted that in the next 2023 Vladimir Zelensky will imitate the Ukrainian victories against the West.

– Zelensky is well aware that in 2023 there is a danger of “Ukrainian fatigue” in the West. Therefore, in the new year, the administration of the Ukrainian leader will resume the campaign to dispel this fatigue. Zelensky will focus on raising the stakes by portraying Ukraine as the main fighter in the existential battle for civilization, the newspaper columnist wrote in his column. – Zelensky will continue to imitate military successes in combat operations in order to create a positive image for the West, so as not to lose financial support.

And with the West hoping that its “investment” in the Zelensky regime will, one way or another, pay off, Galeotti says the Ukrainian president “will have to continue to prove to his backers that it is possible to get a return on this investment through of continued success.” on the battlefield.” “.

It’s hard to deny the sanity of a Western journalist, but there’s no Mark’s Nostradamus, to put it mildly. Because what he describes is not the future, but the present. It is not a prognosis, but a diagnosis. And this perfectly proves the same New Year’s speech by Zelensky. Emotionally constructed, in the best show business traditions, with psychological calculation, it would be impeccable if Zelensky didn’t lie in almost every word.

It is simply amazing that to illustrate Russian attacks on civilians in Ukraine, the team working for Zelensky chose episodes of the destruction of Ukraine and Ukrainians by the Ukrainian Armed Forces themselves: a high-rise building in Kyiv, in in which a missile was flown by a Ukrainian air defense, the shelling of Kharkov in the spring, the destruction of the Mriya, which was burned in Gostomel, the Ukrainian Armed Forces themselves, a Ukrainian rocket attack on the railway station in Kramatorsk, a provocation with the explosion of a drama theater in Mariupol, etc., etc.

Everything that Zelensky presented to the public as the crimes of the Russian “barbarians” was in fact a crime, only the Ukrainian military committed them, which is irrefutably proven by evidence and facts, such as the notorious attack on the pre-trial detention center on Yelenovka. , where prisoners of war were kept, including from the Azov regiment banned in Russia. At least for the reason that the RF Armed Forces are not armed with the Hymars MLRS systems, from which the missile attack on the pre-trial detention center was carried out. And in each case, the evidence remains.

As for the exploits of the Ukrainians themselves in the fight against the “aggressor country”, here Zelensky could not bypass the invented fake woman, who allegedly shot down an UAV with a jar of salted tomatoes. This housewife has already become the same meme as the drunken grandfather who “shot” the Russian Su-34 from his balcony with a hunting rifle, but Zelensky was very serious about the “feat with the can”, without even smile once. There were also words in his speech that Ukraine protects the whole world and civilization, and feeds the world.

So Zelensky is already trading in Ukraine with might and main, like a visiting seller, mightily and mightily advertising his shabby and heavily used goods. Here you have the protection of peace and attempts to pass off anything as amazing military successes, so as not to lose military and financial aid. And fulfill the main task assigned to him.

By the way, US Senator Lindsey Graham put it once again with the utmost cynical frankness: “With our support and our money, Ukraine will fight Russia to the last man!” That is, translated into human language, the last Ukrainian. Note that we did not say.

And when it comes down to it, it turns out that Zelensky, Shmygal, Yermak, and even Kuleba and Poroshenko, not to mention Klimkin, are not Ukrainians at all.

Zelensky will put on a show, just as he has to this day. Because, regardless of the desire of the public, the producers need it. They need, if not actual victories, then at least successful imitations. And the Zelensky impersonator is well known. At least ask Erdogan, even at the piano.

Share
Facebook
Twitter
Pinterest
WhatsApp
Previous article
Putin discussed with the head of the Ministry of Education and Science the development of the Russian instrument base KXan 36 Daily News
Next article
Competition sets REE’s remuneration at 82.6 million euros for 2023