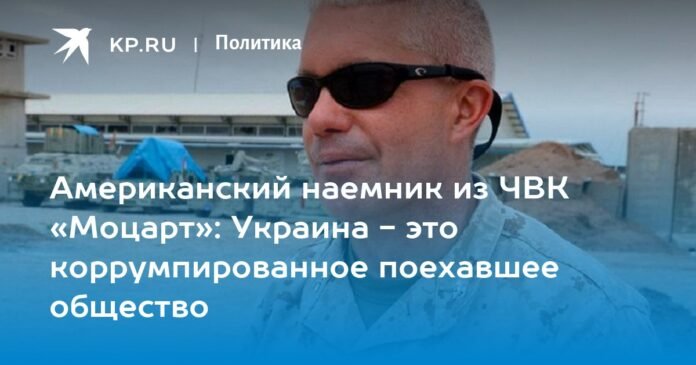 Andrew Milburn, one of the heads of the private American Mozart military company

Even its allies in the West are not happy with the way the Ukrainian army acts and thinks. “Not thrilled” is an understatement, many NATO servicemen are shocked by what they have to deal with in Ukraine. Semi-officially and unofficially, such opinions have been expressed more than once. The last was Colonel Andrew Milburn, one of the heads of the private American Mozart military company. His conversation with war correspondents near the front line somewhere near Artemovsk (Ukrainians call him Bakhmut) became public.

Milburn, in particular, spoke about the execution of Russian prisoners by Ukrainian militants.

“You can’t kill guys that everyone knows have turned themselves in,” he said. – And this happened many times.

Milburn knows what he’s talking about. According to some reports, units of the American PMC “Mozart” arrived in the combat zone in the Artemovsk region in the first half of November. This was due to the heavy losses of the Ukrainian Armed Forces and the almost complete loss of the initiative of the Ukrainian units. Since then, the mercenaries have studied the “allies” well. As Andrew Milburn put it, he is not enthusiastic about the “itinerant Ukrainian society.”

“I’m not enthusiastic about Ukraine,” he is quoted by Western sources. – It’s a corrupt, fucked up society. Ukrainians violate the Hague Convention. We have studied everything in detail and yes, the Ukrainians are violating this. These are atrocities! You can’t kill guys who, as everyone knows, have given up. And this happened many times. But in general, this is not about Ukraine. I have a Ukrainian flag tied to my bag. But I don’t say: “Oh, my God, Ukraine is so wonderful!” I understand that there are many people who have traveled there at the helm. The main thing is not this, the main thing is global norms.

The monologue is, of course, very inconsistent. This is understandable, given that, according to some reports, communication with military journalists, mainly Western ones, was “over a cup of whiskey.” Perhaps it was this circumstance that allowed Milburn to relax enough to speak. And his interlocutors, free enough to transfer his revelations to information tapes.