HomeLatest NewsPoland will not go to Russia, but two fronts will have to...
Latest News

Poland will not go to Russia, but two fronts will have to be opened: How the special operation will develop in 2023 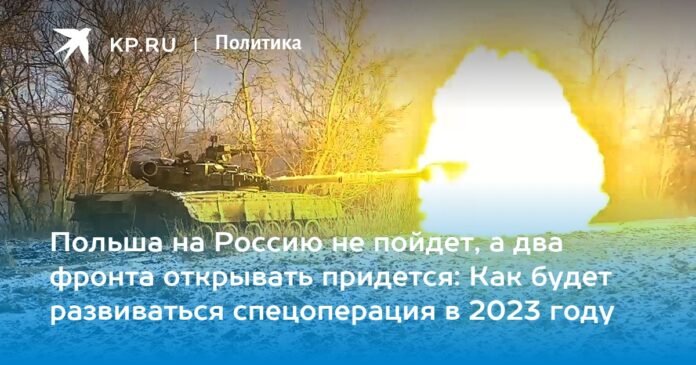 Combat work of tank crews of the Western Military District in the area of ​​​​the special military operation. Photo: Press Service of the Ministry of Defense of the Russian Federation / TASS

On the air of Radio Komsomolskaya Pravda, the presenters Igor Vittel and Ivan Pankin discussed how the special military operation will develop in 2023 with the well-known military expert Vladislav Shurygin.

– Can there be a turning point in the NWO after the New Year holidays?

– The situation has rather reached a plateau. Well, more or less: we are reaching the maximum scale of the special operation.

– It turns out that and Ukraine. Everything that can be involved is now involved on your part. There are no Western tanks yet, but in a month or two, and they will appear. We are also rapidly expanding our capabilities. Much will be determined during the winter campaign in the next month and a half.

– At least the further course of the conflict for the next five to six months.

– Is a conflict with Poland possible?

– Poland has an interest in getting as much money as possible from this conflict. But Warsaw, plunging into the conflict at the level of its “volunteers”, “vacationers” who are sitting there on Polish tanks, understands how important it is to choose the right point of intervention.

– And if it is wrong to intervene?

– That could end very badly. Rather, in the first half of the upcoming military campaign, Poland’s tacit participation in this conflict will continue. There will be more mercenaries, PMCs, instructors, people without documents. But for Poland to go directly to war with Russia with her brigades, until this happens.

– Can Russia consider the massive supply of mercenaries and weapons from one of the NATO countries a sufficient basis?

We really don’t need it now. We have to deal with Ukraine on Ukrainian territory. We understand the pros and cons of NATO countries not officially getting involved in the conflict. His help to Ukraine is not endless. This assistance does not help Ukraine break the conflict.

Picketers against the provision of military assistance to Ukraine in Cologne, Germany.

– It only maintains its combat capabilities. On the other hand, we are satisfied with not opening a few more fronts. Because then we will also have to help defend Belarus. This will be a problem for us.

– A Ukrainian rocket fell in Belarus. Will Minsk take a more active part in this conflict in 2023?

– Hardly. Belarus is psychologically not ready to enter this conflict. I do not think it does. For us, Belarus in its current state is more important, as a place where we can deploy our groups. Where we can order with factories, please use industry. Using Belarus as a kind of point through which we have access to a lot of things that we have under sanctions. In this case, it is much more important for us now.

– Is there no direct threat to Belarus now?

– No. For us it is more important as a rear guard, as a concentration zone. From its territory we can initiate hostilities. It will even be logical, especially if we move to the west of Ukraine and cut it off, cutting off all communications.

– The optimistic prognosis is that by next December the conflict will end with Ukraine forced to leave the conflict under the terms that we will dictate. Can we take it all? I still can’t figure it out.

“What needs to happen for us to dictate the terms?”

– To do this, we must completely isolate Central and Eastern Ukraine from communication with the West. Cut through the hallways that are now. In this case, take Western Ukraine and plug this traffic jam. We must defeat the main military groups that we have now. That is, to deprive Ukraine of the opportunity to conduct offensive actions. Putting the main political centers under attack. Kyiv must choose in this case between an honorable surrender or an assault.

– What about the pessimistic scenario?

– If a lot of things don’t work out, most likely in December we will have the same conversations about how the NWO will go further.

– Kadyrov announced the second stage of the “Retribution” operation in Ukraine. What will come of it?

– I really don’t understand what specific operation we are talking about. It seemed to me that this was more of a local operation related to the actions of the Chechen units. I haven’t heard of Operation Retribution on a group-wide level. The first was Operation Retribution for the deaths in Kyiv of several dozen Chechens killed by the Nazis. If I’m not mistaken.

– Why can a positive forecast be justified? Ukrainians have an unlimited reserve.

– “Unlimited Reserve” – ​​is very limited. A third of Ukraine left. The entire mobilization resource of Ukraine is in the region of 1.5-2 million. Of these, as they themselves say, a million are already in arms. This million fights not quite. The combat core is working, this is about 600-700 thousand. The number of heavy weapons they have are in short supply. They use what they have. Ukraine does not have its own military-industrial complex.

– If we can impose our own line of conflict in the conduct of hostilities, that is, we will not limit ourselves only to the conflict in Donbass, but create two or three more operational areas, two more fronts, then Ukraine will begin to experience very serious problems. with her ability to reduce conflict to the normal course for her.