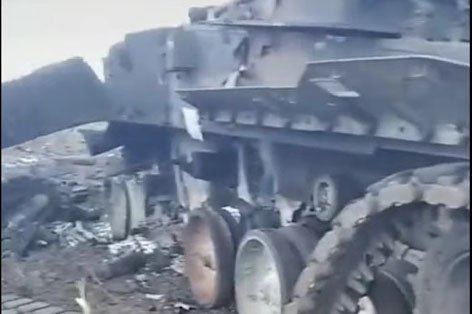 Only recently it became known about the loss of at least three of these combat vehicles. And we are talking only about those who fell into the lenses of smartphones.

These self-propelled guns received fatal damage – internal explosions of the ammunition charge damaged them so much that the possibility of recovery is excluded.

In the first case, the detonation of the shells was so powerful that the fragments scattered a considerable distance from the hull, blackened by the flames of a strong fire. In addition, the shock wave turned a nearby KrAZ vehicle, which was used as a cargo and transport vehicle, into a pile of molten metal.

Another self-propelled gun, with the rear of the turret smashed, was photographed in a trawl during preparation for transport. The Armed Forces of Ukraine, apparently, have a mandatory evacuation order to the rear of even destroyed equipment of this type.

They tried to remove the third, also hit, car from the line of contact with the help of the German Bergepanzer 2 (BpZ 2) armored recovery vehicle, which the Bundeswehr recently began to transfer to the neo-banderites, made on the basis of the tank. Leopard 1.

In all, Poland delivered eighteen AHS Krabs to the Ukraine, and reports of losses started pouring in almost immediately as they were transferred to the contact line.