HomeLatest NewsPope Emeritus Benedict XVI dies at the age of 95 after a...
Latest News 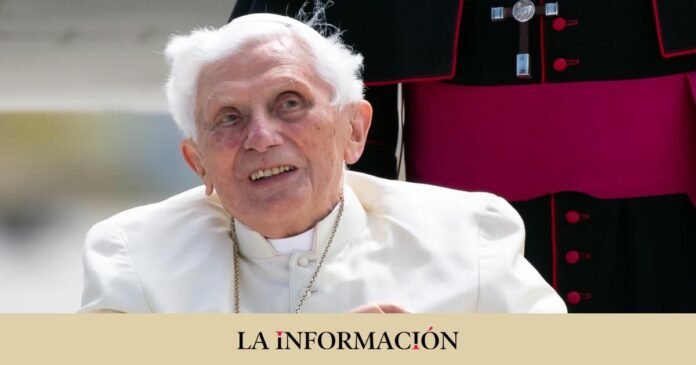 The emeritus pope, Benedict XVI, died at the age of 95 this Saturday, December 31 at 9:34 a.m. in the Mater Ecclesiae monastery in the Vatican, where he had resided since his historic resignation from the pontificate in 2013, according to Episcopal information from the Conference.

This was confirmed this morning by the Holy See in a statement. “It is with regret that I announce that Pope Emeritus Benedict XVI has disappeared at 9:34 a.m. in the Vatican’s Mater Ecclesiae Monastery,” reads the official note from the Vatican, in six languages.

Concern for the state of health of the German pope and theologian arose on Wednesday, December 28, when his successor, Francis, acknowledged that he was “very ill” and asked for “a special prayer” from the faithful who attended his general audience.

Shortly after, the spokesman for the Holy See, Matteo Bruni, stated that Benedict XVI’s situation had worsened because of his advanced age. The emeritus pontiff’s personal secretary, Monsignor Georg Ganswein, had repeatedly stated in recent years that he was like “a candle that burns out slowly and serenely.”

A day later, the Holy See assured that Benedict XVI had “managed to rest well at night, was absolutely lucid and attentive” and remained “stable” despite gravity. A situation that he continued on December 30, when he presented “stable” conditions, although he was able to attend a mass held in his room.

Benedict XVI had decided to spend these moments in his stay at the monastery where he has resided since his historic resignation from the papacy, announced on February 11, 2013 and consummated on the 28th of that same month, the first time in six centuries, since the time of Gregory. XII. After finding out about his situation, numerous faithful had gathered in different dioceses and temples around the world to pray for him, following Francis’ instructions.

Since April 2, 2013, Ratzinger has lived surrounded by his Vatican “family”, made up of his secretary, a doctor, a patient and four consecrated lay women from the “Memores Domini” institute, which belongs to the Communion and Liberation movement, which they distribute the housework and take care of the needs of the emeritus pope. Benedict XVI promised to remain silent after his resignation as a sign of respect for his successor, although on some occasions he has reacted to some current issues that affect him in some way.

For example, in February 2022 he apologized for the abuses and errors that occurred during his tenures in the various positions he has held, after the disclosure of a report on sexual abuse of minors in Germany in which he was accused of being up to date on his time as Archbishop of Munich (1977-1982).

“Once again I can only express to all the victims of sexual abuse my deep shame, my great pain and my sincere request for forgiveness. I have had a great responsibility in the Catholic Church,” he stressed in a statement. He had rarely left the leonine walls, once to visit his inseparable brother, Georg, in the hospital and in June 2020 when he traveled to Regensburg to see him again a few weeks before he died at the age of 95.

Share
Facebook
Twitter
Pinterest
WhatsApp
Previous article
The main scandals of 2022 at beauty pageants: “Miss Kazakhstan” was deprived of the crown, and the Russian woman settled in the same room with the Ukrainian one.
Next article
“Military affairs”: Russian paratroopers broke through the defense of the Armed Forces of Ukraine and entered Artemovsk KXan 36 Daily News