Preferential mortgage for residents of the LPR, DPR, Kherson and Zaporozhye regions in 2023: program conditions, how to get 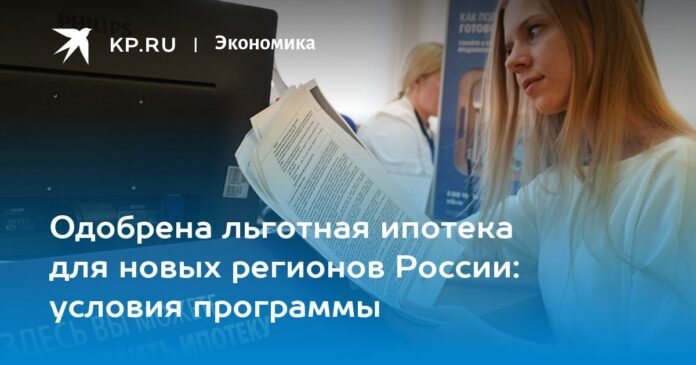 Initial payment – not less than 10%. This is a very favorable condition.

A special mortgage program will be launched in the annexed territories, at a rate not exceeding 2%. You can take a loan for the purchase and construction of homes. Prime Minister Mikhail Mishustin signed the decree on the terms of the program, the government press service reported on Tuesday, January 3.

The fact that such a program will be, it became known in mid-December. Its launch was announced by President Vladimir Putin at a meeting of the Council for Strategic Development and National Projects, at the same time that he announced the extension of preferential mortgages for new constructions and the expansion of family mortgages in 2023.

Now we can talk more specifically about other conditions of the special preferential mortgages for residents of the annexed territories, except for the 2% annual rate. Is it so.

– Down payment – not less than 10%. This is a very favorable condition. For other state-supported mortgage programs (for new buildings, family mortgages), at least 15%.

– The maximum amount of a preferential loan is 6 million rubles. The condition is standard. So, in the preferential program for new buildings and family mortgages for all regions, except Moscow, the Moscow Region, St. Petersburg and the Leningrad Region (for capitals with regions, due to higher real estate prices, there is a ” ceiling” different – up to 12 million rubles).

-You need to buy or build housing for yourself on the territory of the DPR, LPR, Zaporozhye and Kherson regions.

Prior to the 2% rate, the state has so far subsidized only one mortgage program, the Far East Mortgage Program. According to it, housing can be purchased or built within the Far Eastern Federal District. But it is also necessary to belong to a certain category of citizens whom the authorities especially want to support: beneficiaries of the “Far Eastern hectare”, young families, etc.

Let us remember that as of January 1, 2023, the most massive preferential mortgage programs that continue to operate throughout Russia will be modified. Under the preferential program for new construction, the rate increases from 7 to 8%. And family mortgages are extended to families with two children under 18 years of age. Their dates of birth do not matter. Previously, at least one child had to be born after January 1, 2018.