“Pregnant with two at the same time”: Agatha Muceniece surprised fans with news 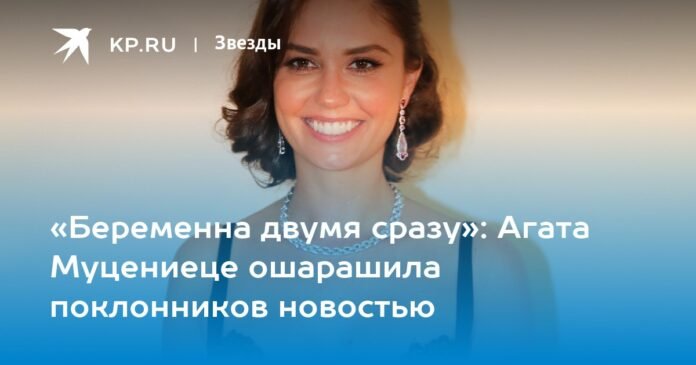 Pavel Priluchny and Agata Muceniece divorced in 2020. After the divorce, Agatha could not find her happiness for a long time. The actress admitted that she had several novels. However, she quickly called it off because she felt that this was not the relationship she wanted. Recently, the star of the series “School Closed” said that she is now dating a new man. Muceniece did not name her new chosen one, but she hinted that he was quick-tempered and very jealous. Her ex-husband Pavel Priluchny was distinguished by the same temperament. Agatha noticed that she is happy in this relationship and that her new boyfriend only makes her happy. “So far, she’s holding up,” the actress admitted.

However, subconsciously, the artist, apparently, does not let go of disturbing thoughts about the future. Today, Agatha got in touch with fans on social media and surprised them with the news: she is pregnant and with twins at the same time.

“Pregnant with two at once,” the subscriber artist was stunned.

True, a little later Agatha admitted that she saw herself pregnant in a dream. The artist complained that in 2023 she began to have strange dreams. In one of them, the actress was in position and was expecting twins. The dream was sad. According to Muceniece, she was constantly worried about how to give birth to two babies, and as a result, one did not survive.

Perhaps dreams about pregnancy are related to the future paternity of your ex-husband. In August Pavel married actress Zepyur Brutyan. And recently it became known that Priluchny’s new wife is pregnant. Pavel and Zepyur met in 2018 on the set of the TV series In a Cage. At that time, Priluchny was married to Muceniec. The Major star has been married to Agatha for nine years.

The couple parted in no way friends. The actress accused her husband of abusing alcohol and raised her hand against her. Pavel said that she slandered him for the sake of PR. At the same time, Agatha always emphasized that Priluchny is a very good father, he spends a lot of time with the children and takes care of them tenderly. After the divorce, Pavel continues to communicate very closely with Mia and Timothy. And now, while Agatha Muceniece is busy arranging her personal life, her son and her daughter are visiting her father.