HomeLatest NewsPremiere of the feature film "Cheburashka": the good and the bad in...
Latest News

Premiere of the feature film “Cheburashka”: the good and the bad in a new reading of your favorite fairy tale 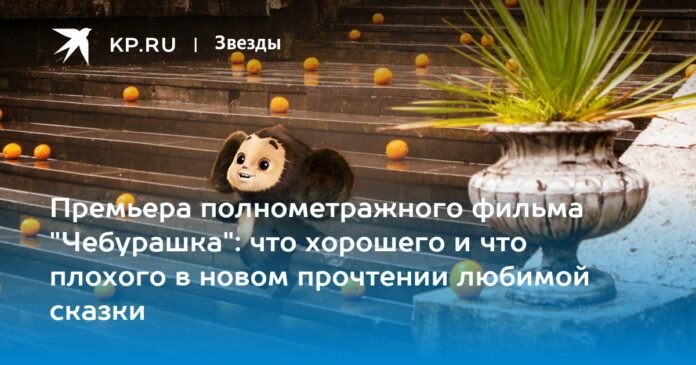 The authors of the new “Cheburashka” want to attract millions of children with their parents to the cinemas during the New Year holidays. Photo: frame of the film.

The main New Year’s release of 2022-2023 is coming out on the screens – a fantasy based on the fairy tale by Eduard Uspensky (since December 24, the film is in limited release, in preview format, and from the January 1, in the widest release imaginable). There is no doubt that six-year-olds and their parents will give the film a fantastic box office. Our film critic Denis Korsakov saw this work and shares his sentiments:

To be honest, I didn’t watch Cheburashka’s end credits until the very end. Perhaps the name of Eduard Uspensky (or the animator Leonid Shvartsman, who invented the appearance of the hero) appeared there. I sincerely want to believe that right at the very end, after listing the names of everyone who worked on the picture, photos of the great writer and animator appeared. For example, out of courtesy. Signed “Remember, Love, Cry.”

But I walked out of the room, like a normal person, after almost halfway through the credits. And they had neither Uspensky nor Schwartzman. The authors of the script were Vitaly Shlyappo, Vasily Kutsenko, Vyacheslav Zub and Anatoly Molchanov.

You don’t even need to watch the film to understand that the merits of Shlyappo and Zub in the birth of Cheburashka somewhat pale in comparison with the merits of those who invented the character and drew it. It is clear that Eduard Nikolaevich, who tried to extract money from everything possible, finally got a little confused about the rights of the famous hero from him. And the unfortunate Shvartsman, who lost all the trials before Uspensky and died this summer, appears in the credits under the general pseudonym Soyuzmultfilm. But “Cheburashka” is not a product of the collective mind. It appeared only because two exceptionally talented people with very specific first and last names lived in the world.

And I say: I hope they were mentioned at the end. Otherwise, it’s just a fairy tale.

According to the press release, Cheburashka lives in the “orange country”. This is really an orange republic, as there are bananas; it appears to be in Latin America because the human characters speak a language that resembles Spanish. His whole life is growing oranges. And the tragedy of it is that the plantations are devastated by a gluttonous beast with ears that consumes oranges in incredible quantities. This is not Cheburashka, but some kind of Chupacabra (it is not clear how the scriptwriters could resist such an obvious joke that would fit his style as a native). Oranges are peeled with a sharp claw motion and then swallowed whole. They try to kill the animal many times with a shovel, but it escapes and, picked up by a tornado that has arrived on time, takes it to the Russian Federation.

The creature lands in Sochi (the city is not called by name, but it is impossible not to recognize it). And it turns out in the house of a gardener who is engaged in the improvement of the local arboretum (Sergey Garmash). He is unsociable, gloomy and, it would seem, gives free rein: he would begin to bite off people’s heads; pure crocodile. And his name, of course, is Gennady.

And of course, Gennady eventually becomes the Creature’s best friend. He doesn’t know what to call the monster that destroyed his apartment and created a big dent in the thicket of phloxes that he cherishes. He explains to the guests that it is a “Belarusian eared sheepdog”, which “chases moles and mice in the garden”. But there are many options: a jumpsuit? A mix of monkey and parrot? Almost in desperation, he uses the word “abyrvalg” in relation to the Creature (by the way, it always seemed to me that Garmash was the only actor who could play Sharikov in a great way if Vladimir Tolokonnikov did not exist in the world).

And then the Creature suddenly begins to speak. In addition, he makes Garmash’s grandson speak, who is five years old and has not yet uttered a word. Also, he starts reading, and the first thing he picks up is Dahl’s dictionary. The only word that catches her eye in it is “cheburah”. And we all guess what name in Russian he will eventually choose for himself.

The old woman Shapoklyak is also in this story; She is played by Elena Yakovleva, she is an incredibly rich woman, the owner of the main chocolate factory in the city of Sochi. (Her name is not Shapoklyak; the only direct analogy with Ouspensky’s heroine is that the name comes from the French chapeau claque, a kind of cylinder; here Yakovleva wears hats of the wildest and most amusing styles, with these hats she mainly performs her paper ). She has a granddaughter, a very capricious creature, greedy for new toys. And Cheburashka becomes love at first sight for this granddaughter: she completely forgets herself, she opens her mouth and from there says “I WANT!” Yakovleva-Shapoklyak is so rich that if she wishes, she can close both the arboretum and all of Sochi, so Genya-Garmash had better be more careful with her.

“Cheburashka” as a whole is almost immortal – at least for the next two hundred years this beast will be enough. It is possible to rethink this image, to make films about it for the new generations, infinitely. The authors of the new “Cheburashka” want to attract millions of children with their parents to theaters during the New Year holidays and earn billions of rubles. They will earn two, and according to the most optimistic estimates, three billion. And it’s hard to argue against the desire to make money. But the unpleasant word “forcing” is already moving on the critic’s tongue.

However, even in such projects there are sometimes live moments. For example, Artem Bystrov, who plays Sergei Garmash in his youth, fantastically combines it both externally and internally; the rarest case when you see two brilliant and completely self-sufficient actors, and you really believe that there is a person in front of you, just at different times in your life. Garmash himself was and remains a wonderful artist, and the idea of ​​turning a crocodile into a man works perfectly, precisely because he is absolutely flawless in the role of a crocodile. Finally, Cheburashka in the trailers looked poorly drawn, ridiculous, incompatible with anything else in the world of a computer creature, and on the big screen in a full-length film format he suddenly looks like a native.

But this is a movie for six-year-olds, and it’s an hour and forty-five minutes for adults, and half of it is about trauma. Psychological trauma, which half the characters suffer. You see, the hero Garmash had a wife who was a hang glider and she crashed. Terrible, yes (if it wasn’t so fake from start to finish). Her daughter suffered too, it got on his nerves and at some point he handed her over to ‘Aunt Masha’, so she hated him and stopped communicating with him, she too has a trauma that needs to be resolved. At some point, it becomes interesting: is all this necessary?

I’m afraid it’s essential. A colleague of mine commented that this is “not for kids, but for their thirty-year-old parents,” the millennials who believe that without even minimal injuries, you’re some kind of inferior person. The word “trauma” should become the word of the year in Russian.

“Look” – another New Year’s project, equally difficult to calculate for business, is mainly devoted to trauma: there the heroine cannot make peace with her father, and he has to die in order for her to finally solve her problem. In the very modest film “Nearby” by Tamara Dondurei, which was released the other day, the heroine’s husband dies of a heart attack (after she told him that she decided to have an abortion), and she first begins to “work”. through trauma” – communicating with her, as if she were a toxic mother, who, of course, is to blame for everything.

No, everything is clear, but somehow all this is regrettable: attempts to ennoble yourself (the victims always look noble and beautiful) with childish resentment, explanations that once in childhood dad stepped on your foot. This is much easier than admitting that you yourself are just a million flaws and starting to think about them, the whole million, from the first on. In the end, if we talk about real, life-disfiguring injuries, we don’t have to go far: as Eduard Uspensky’s daughter said, he beat her, was an alcoholic and a psychopath, merged her with a cult and, in general, turned her. her youth to hell. I wonder if the millennials who complain about their little mental problems don’t feel like they are complaining to devalue the real and terrible wounds of people who still bleed at the mere mention of their parents.

Cheburashka, barely mastering the human language, begins to utter wisdom like “I think you are so sad because you do not know how to forgive yourself and others.” But before that, he says, “I don’t want to be human.” It’s as if he had a slight disgust for all this painted slip-on-the-muzzle of his, for the human desire to explain away all his troubles with his injuries (and not, for example, with his innate greed, frivolity, or stupidity). the). This is where he must stop. And shut up.