“Priluchny is jealous”: Agata Muceniece starred in underwear and showed a dream figure 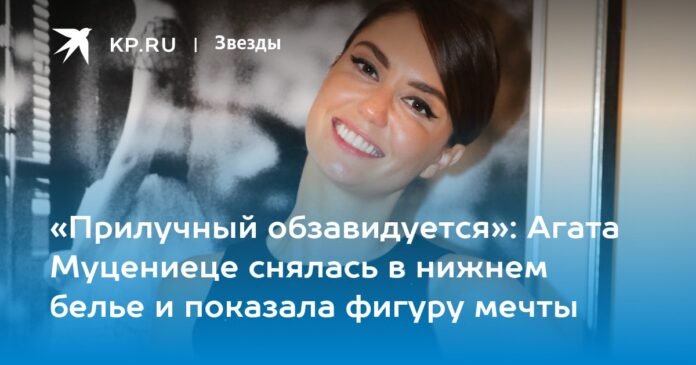 The star of the series “Closed School” Agata Muceniece posted a candid photo in underwear on her social network page. The 33-year-old actress decided to show off her flat stomach and her athletic figure. Agatha took a selfie in front of the mirror and showed off her toned abs, which can only be envied.

“A minute of narcissism”, signed the star.

Agatha has something to be proud of, and subscribers did not fail to note this in the comments. Many remembered the ex-wife of Agatha Pavel Priluchny and suggested: looking at this photo, she would definitely regret that she had missed such a beauty.

“This is a figure!”, “And Priluchny will be jealous”, “Good”, “The press is just space,” the followers wrote to Agatha.

Agatha took a selfie in front of the mirror and showed off her toned abs. Photo: social networks.

The actress pays a lot of attention to sports: she tries not to miss daily runs and often trains in the gym. In addition, her Agatha lost a lot of weight during the filming of the Ice Age television project. The actress skated in pairs with figure skater Alexander Enbert. They had to train on the track for several hours a day. Also, for one of the ice show numbers, Agatha had to master the art of pole dancing. Barbell stunts also require physical stamina and burn a lot of calories. The actress trained for several weeks, but the number turned out to be truly spectacular: dressed in leather pants and a one-shoulder crop top, the artist climbed the pylon on roller skates and demonstrated various dangerous tricks.

Pavel Priluchny and Agatha Muceniece were married from 2011 to 2020. After the divorce, Agatha never found her happiness. The actress admitted that she had several novels. However, she quickly called it off because she felt that this was not the relationship she wanted. Recently, her Agatha said that she now she has started a new relationship. The actress did not name her new chosen one, but she hinted that she is hot-tempered and very jealous. How long their relationship will last, the actress cannot guess and she says that for now he enjoys what he has.

“Recently, I began to fully communicate with a young man. And he is such a jealous bully too! How I adore! I’m still holding on,” Muceniece shared in an interview with writer Alexander Tsypkin.

Remember that in a marriage with Priluchny, Agatha gave birth to two children – Mia and Timofey. The couple parted in no way friends. Muceniece accused her husband of abusing alcohol and raised her hand against her. Pavel said that she slandered him for the sake of PR.