HomeLatest News"Prisoner of Rublev": it is revealed why Kharlamov forced Asmus to live...
Latest News

“Prisoner of Rublev”: it is revealed why Kharlamov forced Asmus to live with him after a divorce 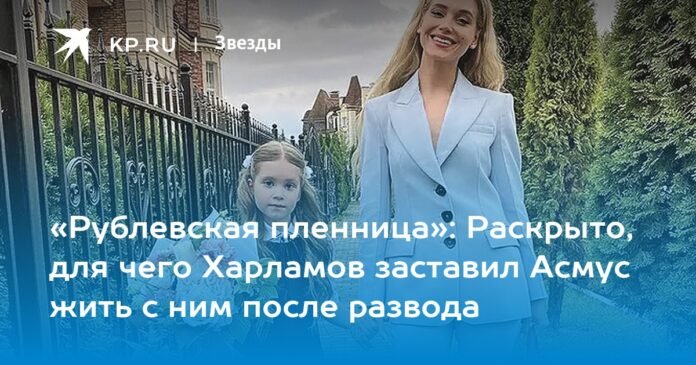 Kristina Asmus and her daughter Nastya live in a four-story house in the elite village of Ilyinka Lanehouse. Garik Kharlamov – in the same place, one floor above.

The star couple Garik Kharlamov and Christina Asmus divorced two years ago. The fans until the end refused to believe in their breakup and hoped that the couple would get back together. Actually, as it became known recently, they did not leave, despite the divorce and the tense relationship…

under the guise of friendship

The actress and 2020 Comedy Club resident announced that they had parted ways as friends. Many admired the nobility of Kharlamov, who said that he left the dacha to his ex-wife and daughter Nastya. On the Secret for a Million program, Garik promised to rewrite a cottage worth 100 million rubles for her daughter.

From time to time, both ex-spouses posted pictures of family celebrations on their pages in social networks. So, on September 1, Garik and Christina together took eight-year-old Nastya to school. Sometimes they posted photos with the heiress in the interiors of a four-story country house near Moscow. The fans were sure: Kharlamov often visits his ex-wife. The fact that the former spouses live under the same roof, the public found out quite by chance during a public skirmish between Kharlamov and Asmus.

It began with the fact that during one show Kharlamov told about an incident from family life with Asmus. Somehow, he drank too much or ate too much, and in the end he couldn’t run to the bathroom.

“I left this house to Christina Asmus, vomited and angry,” the showman concluded, laughing.

The actress did not remain silent: “You did not leave any house for Kristina Asmus. Neither pissed off nor pissed off. And not a penny of money either. I understand that you are still angry that I left you. But the constant public humiliation of the mother of her son is not the most effective way to deal with an internal conflict. Please help me and my son to finally get a place to live”.

Kharlamov responded to the reproach by addressing the first in the networks, also emphatically polite, by name and patronymic: “Dear Kristina Igorevna. You shouldn’t talk about tact and honesty either, since you’ve been living in your half of the house all this time. And live on my full supply. As well as our beautiful boy. Humiliation of a person and a joke about a house are two different things, Kristina Igorevna. And if he hurt you that much, you could go down one floor and say it to my face!

In response, Asmus wrote that Garik kept her “with him” with threats: “Yes, the three of us have been living all this time, but with threats you forbade us to move and refused to buy anything. But living like this is not normal! Please don’t slander about the full provision, we both know that’s not true. Apart from the “common apartment”, which I proposed to divide in half, you have nothing to show me.”

Asmus shares the house not only with her ex-husband, but also with her mother-in-law, Kharlamov’s mother.

And then the mother-in-law Asmus suddenly intervened in the skirmish of the spouses on social networks. Garik’s mother accused the ex-daughter-in-law of ingratitude and assured that she lives with them in the same house. “Christina, for the first time in 10 years, I allow myself a comment about you, but only because the limit has already been reached. Rather, chaos, – wrote the mother of the comedian. – Maybe it was easier to discuss all these moments at home, and not for the whole world? In that beautiful and cozy house in which we all live together, with Nastya. By the way, the boy has housing, and more than one, provided by a loving father, ”Natalya Igorevna said.

The situation is really non-trivial: so that after the divorce the “formers” live together, and even with her husband’s mother, where has this been seen? But what about Garik’s past assurances that he left the house to the mother of his son? According to the documents, he still owns the house by himself. A luxurious 473-square-meter cottage in the gated community “Ilyinka Lanehouse” on Rublevka was repurchased in 2014 with Kharlamov’s savings, which was confirmed by Christina herself. And in court, the showman managed to prove it. Therefore, after the divorce, the luxury real estate remained with him. In his entourage, they say that Garik only went to his capital apartment for a few months after the divorce, but soon returned to a spacious house.

The relationship of the former spouses is far from friendly. Moreover, each of them has long had their own personal life. Christina meets a colleague in the theater, a young actor Roman Evdokimov. And Kharlamov did not hide the affair with actress Katerina Kovalchuk. True, this fall the comedian suddenly called himself a “lone wolf” and stopped dating a girl. Many are now sure that Kovalchuk could not stand Garik’s residence as a “Swedish family.”

After the divorce, the showman met with actress Katerina Kovalchuk for two years. But in the fall they broke up. Photo: katerinakovalchyk/VK

“On a Short Leash”

Fans are perplexed: why doesn’t Christina, such a sought-after actress, buy a house and move away from her ex-husband? In 2021, the favorite of the artistic director Oleg Menshikov starred in the film “Entering the house, look around”, receiving 450 thousand rubles for this. For an advertising post on social networks, it takes 200 thousand rubles. Previously, Christina took part in TV shows, for which she set a fee of 200 thousand. But after the start of the CBO, she practically stopped appearing on entertainment television shows. According to Forbes, in 2021 Asmus earned almost 30 million rubles. This year, she did not make it to the list of rich stars. And yet such income allows you to buy or at least rent a separate house! The actress herself hinted at some threats, because of which she cannot leave the family home.

The showman invested millions in decorating the mansion. In the living room behind Christina is a carved fireplace, under her feet is an Italian marble floor. Expensive furniture and Italian rugs are everywhere.

“Christina is overreacting,” a friend of the showman told KP. – As far as I know, she is in the content of Kharlamov. And everything for her daughter is bought with her money. This was the case during her family life and after the divorce. What Christina earns, she often spends on herself: grooming, outfits, etc. And Garik does not buy a separate apartment for his ex-wife for his own reasons. Kharlamov wouldn’t want her meeting other men in front of his daughter.

According to a friend, after the release of the scandalous film “Text”, Christina began to be perceived not only as Kharlamov’s wife, but also as a famous actress.

“I caught a star, gained great popularity,” says an acquaintance of Kharlamov. – Nature is violent, flammable and not always capable of self-control. Therefore, Garik and his mother are trying to protect the boy from the wrong emotions. Kharlamov promised Kristina that he would buy a separate home, but he backs out because he is satisfied that her daughter is in the care of a loving grandmother. Now Garik has everything under control and the first, so to speak, on a “short leash”.

Also, according to his friends, Garik would not want his daughter to have the “number two dad.” The showman fears that if Asmus and his daughter leave, he will see less of the girl.

“There were no threats from Garik,” says a family friend. “Does anyone really believe that she keeps her close to him by force?” If she wants to go, she can go, but there is one condition: the daughter must be with her father.

Perhaps, living under the same roof with the first, Kharlamov hopes that Christina will finally get tired of this state of affairs and move out without her daughter … Apparently, in order not to lose her daughter, Asmus undergoes “cohabitation”. in the same house with the ex-husband, and even his mother.

What else does the showman own?

In addition to real estate in the Moscow region, Garik also has a five-room apartment in the center of Moscow.

Kharlamov is not a poor man. In addition to a country house, he owns a five-room apartment on Moscow’s Grokholsky Lane with an area of ​​109 square meters. m worth about 80 million rubles (which he has left after the first divorce) and a share in the parents’ two-room apartment in the southeast of Moscow worth 10 million rubles.

Garik also has a couple of parking spaces and a Porsche Cayenne. According to Forbes, Kharlamov earned more than $2 million in 2021. The showman is the founder of the food delivery companies “Nevsky Melodies”, “Hot Dog Bulldog”, “Hello, come!”.

This year, the income of his ex-wife Christina Asmus has decreased. Kharlamov is gaining momentum. He starred in the sequel to The Hussar and receives additional income from the business.

Share
Facebook
Twitter
Pinterest
WhatsApp
Previous article
The position of a trainee doctor, new campuses, a highway through Russia – what else did Putin talk about at a meeting of the Council for Strategic Development and National Projects? KXan 36 Daily News
Next article
This is the project of two people from Madrid based on digitization and connectivity so as not to leave peoples and continents out of the picture