HomeLatest NewsPutin assessed the state of affairs in the LPR: "The situation is...
Latest News

Putin assessed the state of affairs in the LPR: “The situation is still very difficult” 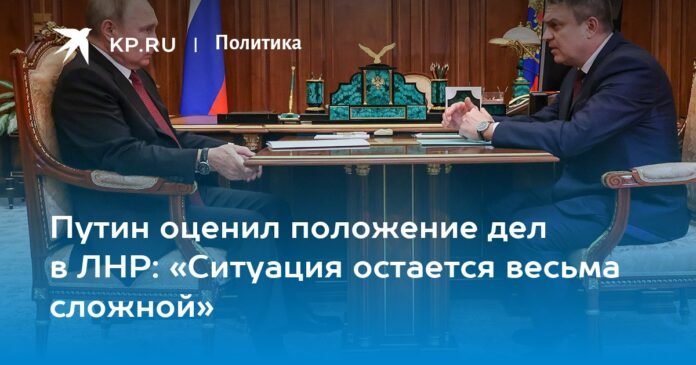 Russian President Vladimir Putin and the acting head of the Lugansk People’s Republic Leonid Pasechnik during a meeting in the Kremlin. Photo: Mikhail Klimentyev / Press Service of the President of the Russian Federation / TASS

Acting head of the Luhansk People’s Republic Leonid Pasechnik met Vladimir Putin twice in one day. First, the president presented the official with the Order of Merit to the Fatherland, first class, and then approved a report on the state of affairs in the region.

COAL IS THE HEAD OF EVERYTHING

– It’s no secret that the situation in the Luhansk People’s Republic is still very difficult, – the head of the country admitted from the very beginning, and then asked to talk about the economics of the issue.

Pasechnik immediately replied that the basis of everything is the coal industry. In 2019, there was a big reform: all unprofitable mines were closed. 32,000 people were then left without work, but 29,000 of them were able to quickly join the operating mines.

“We have given one party the opportunity to withdraw early,” the official said.

Until 2022, coal production grew steadily, but since the start of the special operation, 58% of miners have gone to the front. And many companies became unprofitable again.

“Today, about three people work in one of the mines, where more than three hundred should work,” Pasechnik said.

The LPR asked the government for a billion rubles to pay back wages. After 2014, many industrial facilities changed ownership and became the property of the republic’s authorities. Now the officials want to carry out the privatization and return the property to private owners.

– It turns out that while the mines are owned by the state, for some reason they are not profitable. As soon as they go private, they immediately enter the level of profitability, they start making good money. And I have a question: are we doing something wrong or… We have to address this problem, said the acting head of the LPR.

– The owner is a republic. This is a Unitary State Enterprise, a unitary State enterprise.

The head of state assured Pasechnik that the government will not put pressure on the republic to make any decision.

– There are practically no state coal enterprises left in Russia. But this does not mean at all that there cannot be state-owned companies in the LPR, – said the president, – No one from the federal center will impose decisions on them related to privatization or the adoption of any other decisions in the field of property.

Pasechnik asked Putin to help the republic with jobs. Because now the mobilized miners will sooner or later return from the front and they will have nowhere to find work.

– And they will ask me a question: Leonid Ivanovich, we shed blood, but we have nowhere to go to work, – said the acting head of the region.

The Russian leader promised to help with this and with subsidies for miners’ salaries. And also with specialists in mobile communications. As Pasechnik admitted, there are simply no people in the LPR who would establish the Internet.

At the end of the meeting, the Republican official asked Putin two more things:

+ On subsidies for firewood and charcoal for the population. Many houses are destroyed and the locals have to warm themselves with pot-bellied stoves.

+ Give the remaining miners a stock of the eraser. This will protect the surviving industry from ruin, and also the men will be more willing to go to slaughter if they are not called to the front.