HomeLatest NewsPutin kept his promise. This is how Russia responded to the...
Latest News

Putin kept his promise. This is how Russia responded to the gas price ceiling in Europe 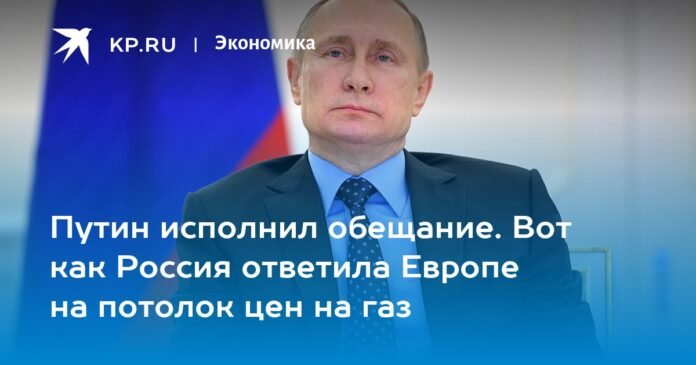 Vladimir Putin: “An attempt at administrative regulation of prices will not lead to anything good in the gas sector, just like in the oil sector.”

We hasten to immediately upset some readers: it is too early to wallow in the topic “now everyone will freeze there.” They won’t freeze. For now.

Let us remember that on December 20 the European Union has established a ceiling on gas prices. We hang this ceiling at a height of €180 per MWh. Translated into more familiar figures, this is $2,000 for every thousand cubic meters of gas. The condition will take effect on February 15, 2023; from this date, Europe will refuse to buy “blue fuel” at a higher price.

The roof is not simple, but dynamic. That is, if necessary, it can be moved, both up and down.

– This mechanism does not establish a strict limit, but it will avoid sharp jumps in gas prices, – commented the European Commissioner for Energy, Kadri Simson.

The roof was installed not only for the Russian Federation, but also for all other providers. But lately, our country has been a little fed up with all kinds of roofs. In early December they capped the price of oil at $60 a barrel, and that’s it. Therefore, the Russian authorities immediately stated that the gas limit would not go unchallenged. Which was not long in coming: on December 22, the president…

…commented on the European “innovation”:

– Trying to administratively regulate prices: it will not lead to anything good in the gas sector, as well as in the oil sector, – Putin said at a press conference.

…and signed a decree on our response to the European gas limit. On the night of December 22, the document was published on the legal information portal. In official language, this decree limits the fulfillment of the obligations of Gazprom and its subsidiaries to organizations associated with “hostile countries.”

We explain. The decree says that the government must set its maximum gas prices within 10 days. And Gazprom will be prohibited from paying for gas production and supply services of companies associated with “hostile countries”, unless, of course, the price exceeds this limit.

It is not difficult to understand what is at stake. In Russia, there are two joint ventures with European companies engaged in the production and supply of natural gas, as well as gas condensate. Both operate in the Yamalo-Nenets Autonomous District, in two camps. In one case, Gazprom’s partner is the German Wintershall Dea, in the other, the Austrian OMV. This is how they will be paid, based on the ceiling that the government will set in 10 days.

How will Gazprom suffer from this? Almost nothing. The two deposits mentioned do not contribute to the total production of our country. Especially now, when the volume of shipments to Europe has dropped significantly. But the bosses and employees at Wintershall Dea and OMV should push themselves: their profits may decline.

Share
Facebook
Twitter
Pinterest
WhatsApp
Previous article
The Ministry of Education approved the program of school education with military training in the life safety course – Rossiyskaya Gazeta
Next article
“We feel confident.” Vladimir Putin answered questions from journalists about the results of the year for Russia KXan 36 Daily News